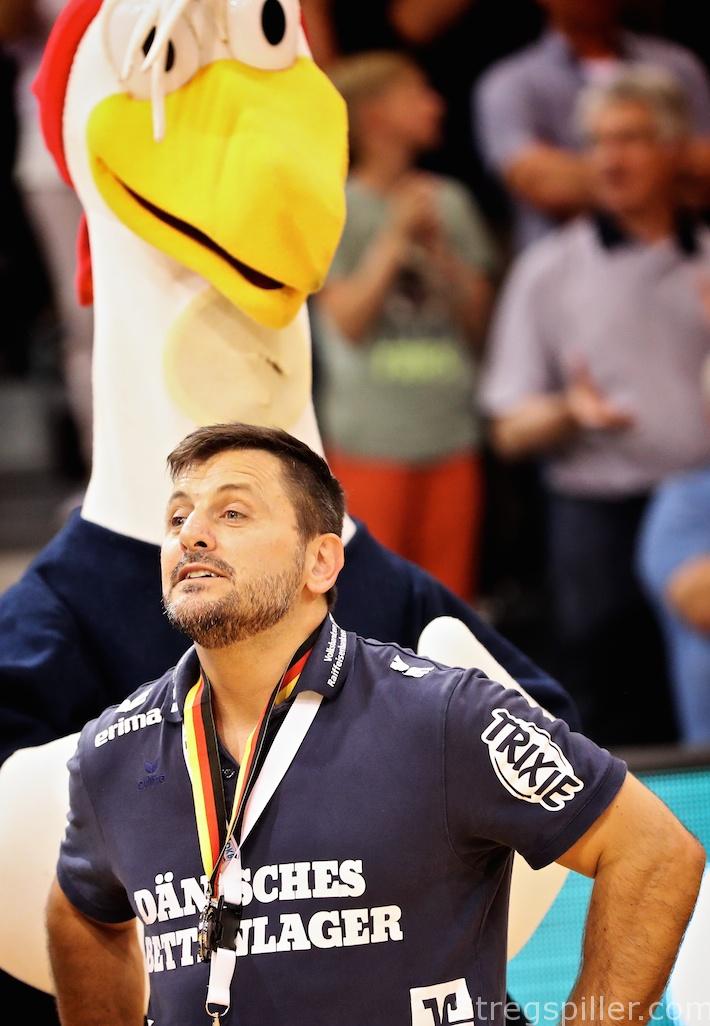 “Players go over the limit, too often”

Ljubomir Vranjes is always great to talk to.  No matter the topic, his replies come anything but short.  He loves to discuss, to argue, and to express his love for the sport.  When I told him that I would like to have a 15-minute chat with him I was happy that he found the time at all.  In the end, we spoke for more than half an hour, vintage Vranjes.  We talked about his team’s performances, the physical stress for the players and his open letter to fans in Flensburg.

Q: Ljubo, first of all thanks for taking your time, which is a good keyword.  How much time in a day do you spend thinking about handball?

Q: So, whenever the national leagues have a small break, your mind can take off for some time?

A: Not really, it’s not possible during the season.  But right now we’re focusing on physical aspects and take less care of tactical things.

Q: Let’s talk about sport and your team’s performances so far this season.  You have a perfect record in the league, are you satisfied?

A: No, not at all, to be honest.  I think we can play much better than we have done until now.  We’re lacking consistency.  My goals are quite high, and I’m not talking about winning games.  We can win, but in the meantime didn’t do what we wanted to do.  It’s not always the case that we play the way I’d like us to play.

Q: I guess you weren’t too happy about the performances against Plock in the Champions League and Berlin in the German Cup?

A: Well, we can talk about Plock first.  We played many games already.  You can see that.  Thomas Mogensen, the “engine” of our team, had to play a lot so, I tried to rest him.  But it’s not always possible.  And how should I say it?  There’s not only handball all the time and right before the Plock game something happened which I can’t talk about openly.  I was quite afraid before the game and at the beginning it really didn’t work.  But we were able to turn it around, with the help of our fans.  Against Berlin we played quite well.  We missed a number of open shots and Heinevetter had some good saves.  Berlin is a very good team, by the way.  So I’m not dissatisfied with our performance.

Q: Obviously we respect that you cannot go into every detail, but we still would like to talk about a different topic that also came up during the match against Plock.  You began to cheer on the fans and later on you wrote an open letter addressing them.  Was it something spontaneous or did you think about it for some time?

A: It has been discussed internally before, but I wasn’t able to take care about it.  Our manager Dierk Schmäschke wanted to do something to get the fans back behind us.  For whatever reason it didn’t work.  I was quite frustrated before the game.  The fans don’t know everything what’s going on inside the club.  They come to a game and don’t know how a player trained, if something happened in his family, if he’s injured.  They judge him based on the experience of 60 minutes in the arena.  It’s normal, this is pro sport.  But I needed help, because my players weren’t ready mentally. The arena was “dead”.  So, I acted quite spontaneous. And together we were able to do it.

Q: When it comes to fan support, do you prefer to have a more “silent” arena or one filled with ultras?  I know it is a hot topic because Flensburg’s “Ultras” are not coming to your games anymore…

A: I wasn’t able to get all information about it, but I can be honest, I would like to have the “Ultras” in the arena as long as they behave.  There are good things the “Ultras” do, they make a lot of noise, they sing, they really push the team.  But slur words directed towards older people or kids, has nothing to do with our sport.  But that’s not something directed towards the “Ultras” in particular, it’s about fan behavior, in general.  We need their support because it helps my guys to win games.  All the fans need to stick together.  That’s not the case right now.  Maybe it would help to talk about it and look for a solution, that’s what I think.

Q: Let’s get back to handball – right after the break you face your archrival THW Kiel three times within ten days. What do you have to do particularly well to beat Kiel?

A: To beat them everything has to work. Kiel has a great “winner’s” mentality.  They have two fantastic goalkeepers, a full house, great atmosphere… So if you want to win in Kiel, everything needs to go your way.  It’s the same at home.  It depends a great deal on your form on that very day.  Kiel has players like Duvnjak or Vujin – veterans who know the game inside out.  But we also have a very good squad.  We will go to Kiel and try to win the game.  It’s two teams who love to win.  We don’t go anywhere expecting to loose, we want to win all the time.  First of all, we have to take care of Schaffhausen, than we think about Kiel.

Q: I love these games, but three times within ten days is just too much for me.  Are you afraid that the officials at the IHF and EHF are not taking care of their sport the way they should?

A: I don’t know how they think exactly.  The players of the top teams in the Bundesliga, who also play Champions League and the cup, and participate in national team matches; they play way too much.  In a few years it will be all over.  More players will retire from the national teams, not the least because the clubs pay their salaries.  The level of play in big tournaments will go down.  The same goes for the group stage of the Champions League.  I can’t push 100 percent in every game.  I would destroy my players.  We should really take pictures from the players and see how their bodies look like after a full season.  It’s just too much.  You just can’t avoid injuries.  Young players will come in and get their opportunities, but the level of play will be lower.  The players go over the limit, too often.

Q: Let’s talk a bit about tactics. During time-outs you usually call just one set of play, that’s it. Is there a special reason?

A: Before the game I’m usually done with tactics.  Our way to win two points is set.  I use the timeout to tell my players if we have to do something different.  I’m also not a coach who says, “now we have to fight”; because I don’t think it helps.  Sometimes you do have to “wake up” your players; I’ve done that a few times.  And players wouldn’t even comprehend if I’d talk too much.

Q: Is there anything you would change in handball, if you could?

A: That’s a tough question to answer.  But I would like to see that the referees have less influence on the game.  It’s still very easy for the referees to change the outcome of matches.  They need help – it’s not easy for them, because many things can influence them.  Players, coaches, fans.  They are under a lot of pressure and they need more help.  That’s what I would like to change, first.