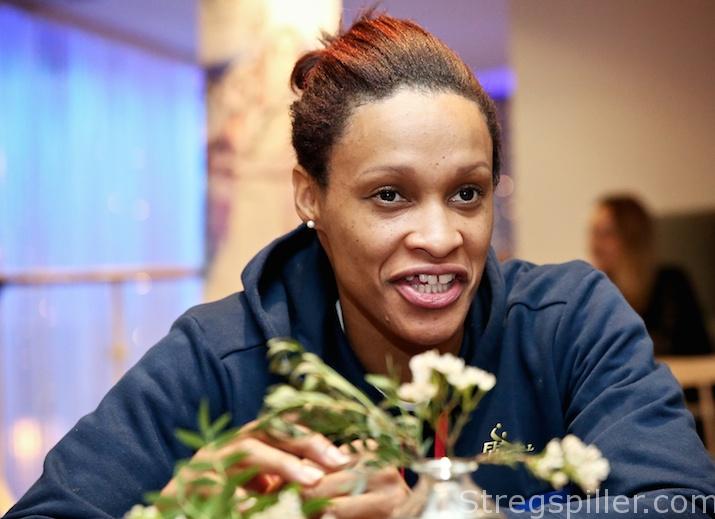 “Playing my 200th international in the final of EURO 2016 would be amazing!”

If France makes it to the final of the Women´s 2016 EURO, playmaker Allison Pineau will be playing her 200th international match.

In this exclusive interview with stregspiller.com, she admits her dream, but she realizes as well that two hurdles will have to be overcome before she can enjoy the moment. The first one coming up is the last main round match against Serbia, on Wednesday night.

Allison Pineau has been synonymous with the recent success of the French national handball team.  And at the European championship in Sweden, the 27-year-old playmaker is one of head coach, Olivier Krumbholz´s, key players, once again.

She was also one of the players who kept her cool when France found itself in trouble against Sweden, on Monday evening before securing a 21:19 win.  Still, Allison Pineau does not think her team was in any sort of crisis.

“We kept sticking to our agreements, and we managed to stay cool,” says Pineau who does not find that the controversial red card for goalkeeper Laura Glauser with less than 10 minutes left to play had any significant influence on her team’s performance.

“Of course, it was a sad incident for Laura and for our team, but we managed to cope with it and stuck to our plan,” says the experienced playmaker, who is quite content with the performance of France in the competition until now.

“It has been fine thus far.  Our defense has been particularly strong.  And we can still reach the semi-final – we even have our destiny in our own hands.

“We could not ask for anything more, but of course, we still have a lot of work to do, and I certainly do not expect our last main round match against Serbia, on Wednesday night to become an easy task,” says Allison Pineau who was awarded World Handball Player of the Year already at the age of 20, in 2009.

Since then, her handball career has taken her to an extended tour of Eastern Europe, where she has been representing Oltchim Valcea and Baia Mare (Romania), Vardar (Macedonia) and Krim (Slovenia) before going home to France to play for Brest Bretagne Handball this summer.

She is not playing in the Champions League this season but she has reached the EHF Cup group phase together with her new club.

“I may not be playing the Champions League right now, but I will be back there soon.

“Sometimes you have to sacrifice something in order to achieve something better.

“After all, I still play in a European Cup competition, and I definitely feel great about being back home in France,” she says.

As we probably all remember, she was one of the most  instrumental players when France took the silver medal at the Rio Olympics, back in August.  It would only be natural, if this achievement would stir up some high expectations in the French federation, but Allison Pineau does not feel the burden.

“No, I do not feel that there is any extra pressure on us because of our success at the Olympics, and I do not think it would have been justified if there was any.

“After all, you cannot necessarily expect a team to peak again three months after having won a medal at an Olympic tournament.

“All our players had to start the season in their clubs right after the Olympics.  Some moved to new organizations, and a number of players even went abroad, including some of our very young talents.  It was not all of us who went back home, like I did.

“This has obviously meant that some of us have become rather tired during the fall season – you cannot really expect the same performance from us here in Sweden when compared to Rio.

“Still, I hope and believe that we can take another medal at EURO 2016,” she says.

Amazing anniversary in the final

If France reaches the semi-final, she can celebrate an anniversary and if all happens according to plan, France will be playing either the bronze medal match or the final this upcoming Sunday.  In either case, Allison Pineau will be playing her 200th international game for France and of course, she hopes it will be the final.

“It would be amazing!

“Of course, I have thought of it already, and of course, I am dreaming of it, but it is still in the future.

“There is plenty of hard work to be done for our squad before then.

“First of all, we must qualify for the semi-final.  This will be difficult enough against a strong Serbian team, even though they have nothing at stake anymore,” says Allison Pineau.