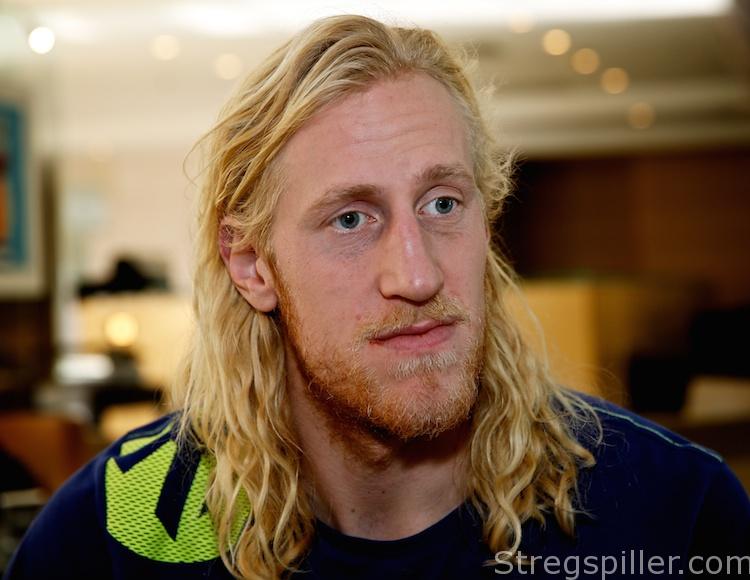 “Playing my own game helps me”

INTERVIEW – The Swedish goalkeeper Mikael Appelgren has his own prescription, for carrying on in times of trouble, as he reveals in this exclusive interview with stregspiller.com.

It helped Sweden a bit, when Mikael Appelgren replaced his colleague, Andreas Palicka, in their opening loss against Iceland at the 2018 European championship.

However, the 28-year-old goalkeeper from Bundesliga leader Rhein-Neckar Löwen was not able to turn the tables and secure a win in the Nordic derby against Iceland, losing 24:26 instead.

When Appelgren entered the court before half time, Sweden managed to reduce a nine-goal deficit.

“Of course, it was not nice to look at the game from the bench.

“We were prepared for a tough match, but the start certainly got tougher than we expected.

“Seven goals down at the half and getting down by 10 in the second half made it virtually impossible to get back into the game.

“In this respect, it did not help us much that we won the last 10 minutes by eight goals,” says Mikael Appelgren before reflecting further why things turned out so wrong for his team in the first 45 minutes of the match against Iceland.

“Before the beginning of the tournament, I think we had put huge pressure upon us, as we were determined to do really well at this championship. All of it meant that we had to win our first match instead of just focusing on playing our best game,” he finds.

Don’t look at the score

His very own European championship started when Sweden were already trailing by nine goals (5:14), replacing his teammate at Rhein-Neckar Löwen, Andreas Palicka.

“Of course, it is always a bit particular to be sent on in such a situation, but all I could do was to focus on doing as well as possible without looking at the score board too often and without thinking too much about if we were down by nine or ten goals or whatever.

“Of course, a good performance on my part was critical for us having a chance to get back into the match. So, of course it was a very special situation,” he admits.

However, he has his very own recipe of how to stay positive and focusing on his task in a situation like that.

“I focus on playing my own game.

“It means that I only think of saving the next shot, while I avoid thinking about the score – if we are down by nine goals or up by nine goals, it does not matter.

“As a goalkeeper, you have a special role in the team to begin with.

“You can save your team, or you can cost your team a victory or a draw. This makes it even more important for me to play my own game “within the game”, so to speak,” says Appelgren who can easily explain Sweden’s comeback in the last fifteen minutes of the game.

“We simply thought that now, things had turned as bad as they possible could and everything could only get better.

“We realized that the match was more or less over – we “lost” the pressure and we just continued playing as good we could without thinking about winning the game anymore.

“Unfortunately, in the end it was not enough, but if we had played in this fashion from the start, you would have seen a completely different match.

“We ARE better than Iceland!” claims Mikael Appelgren.

Not everyone in Iceland might agree with him, not after the game this past Friday night at EURO’18.

“Special to play with my club mate”

In the national team as well as Rhein-Neckar Löwen, Appelgren´s partner in goal is Andreas Palicka, something not seen too often in the world of handball.

“Of course, it is noteworthy, but it also is a great advantage, because we know each other so well.

“It also means that we have the opportunity to talk about things frequently, and I think we complement each other very well.

“The fact that we perform pretty much on the same level also means that it is easy to replace one of us with the other guy, if things are not working.

“Playing with Andreas means that I can relax a bit more,” he points out

Sweden’s next task will be playing against Serbia, on Sunday evening, at Spalladium Arena.

The Serbian team is as much under pressure as the Swedes are after losing 22:32 against Croatia in their opening game.

The loser of the match between Sweden and Serbia will almost be certain to drop out of the tournament after the preliminary round already.

“Serbia will need a win just as much as we do.

“We cannot change what already happened. We can only concentrate on the match against Serbia and try to play our best. Right now, we cannot allow ourselves to look any further than the next game

“If we win, things will look much brighter, and if we lose, we may still be able to save ourselves by beating Croatia in our last group match. It is important for us to have that kind of positive thinking.

In matches like the one on Sunday at EURO’18, a player like Mikael Appelgren is of particular importance because of his huge experience in playing under heavy pressure.

He has grown used to it while playing for Rhein-Neckar Löwen, where he won the German championship twice in a row.

“Of course, I can benefit from my big-match experience, when I am with the national team.

“All games in the Bundesliga and the Champions League are tough. And the fact that I have felt that pressure so often allows me to relax a bit more ahead of a game like the one against Serbia.

“I can probably also pass on some of my composure to my younger teammates who may not have experienced so many tight games yet, when everything comes down to “do-or-die”,” he finds.

Of course, it will be tough, but we are keen to redeem our poor effort against Iceland,” says Mikael Appelgren.