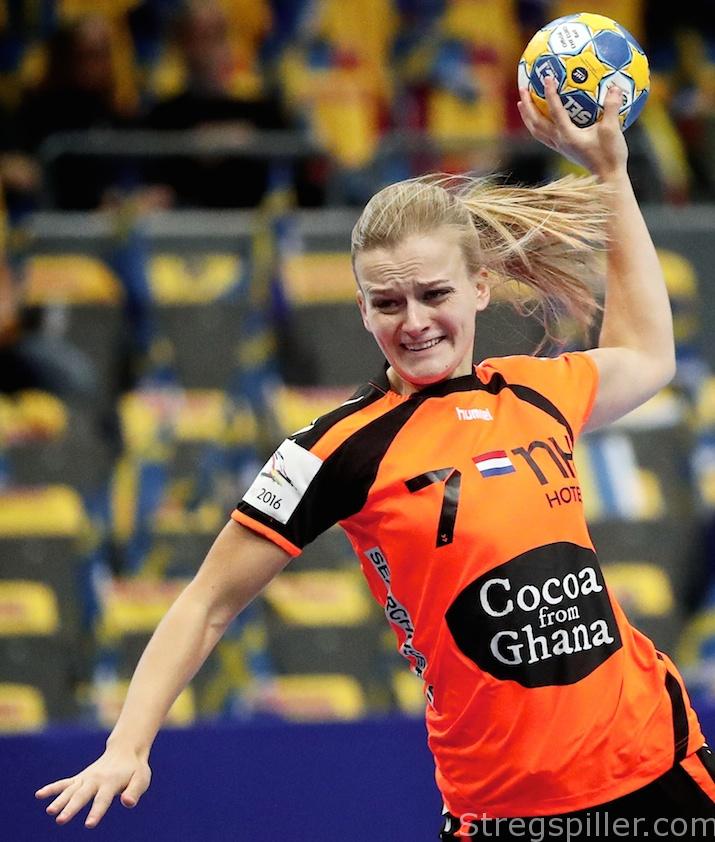 “Playing in the Champions League has made me stronger”

INTERVIEW – Dutch right wing, Debbie Bont, is fit and ready for the upcoming European championship and much of the credit goes to her current club, Kobenhavn, where she has been playing a fine Champions League season, thus far.

If the Netherlands plan on having a successful run at the 2018 European championship, in France, Debbie Bont is one of the players who will have to perform well.

Together with Angela Malestein (Bietigheim), she will be forming the right wing duo in the Dutch team, and she is well aware of the responsibilities that await her in a weeks time.

“I am very much looking forward to the championship and contributions, I can make to my team.

“This season, I feel very well prepared and in great shape, as I have spent plenty of minutes on the court in Kobenhavn,” Debbie Bont tells stregspiller.com.

That’s no exaggeration when considering the injury of her club teammate, Norwegian right wing, Line Bjørnsen.  Bont has been carrying the right wing position single-handedly during the first few months of the 2018/19 season, at least until recently, when 18-year-old Andrea Hansen had her break-through in the Champions League match, in Rostov-Don.

“Andrea has done well and Line will be fit soon – so I can look forward to a bit of rest in the second half of the season.

“On the other hand, I can really feel that performing in the Champions League and playing so much has been good for my development.

“I am absolutely sure that I can use the experience I have gained in the Champions League, at the European championship.

“Fact is that we have been quite successful in the Champions League, so far.  I did not expect us to take three points to the main round and I feel really good about it.  I will take this positive feeling to EURO 2018,” she adds.

Ever since the Netherlands reached the World Cup final in 2015, spectators of the sport have grown used to seeing the Dutch women competing for medals.  Obviously, Debbie Bont is keen on extending the trend.

“Yes – we would love to take another medal, and of course, we go for gold, but we all realize that it will be very tough.

“A European championship always is an extremely challenging competition, compared to a World Cup, for instance, and the upcoming tournament will be no exception.

“The composition of our group illustrates this fact quite well, I think.

“We will face Hungary – always a very difficult opponent.  We lost against them as recently as this year, and this sums it up.

“Spain and Croatia may not be as strong at the moment, but they are still teams who fight hard, and such squads are always difficult to cope with.

“And, we are well aware that it is not only a question of emerging from the group phase, but also to take a maximum number of points to the next round. Therefore, we have to be on our toes in every match,” says Debbie Bont in perfect Danish.

But, not everything looks bright and promising ahead of EURO 2018.

Compared to previous years, when the Netherlands impressed with some spectacular handball, in the upcoming tournament they’ll be missing their two line players and defense pillars – Yvette Broch and Danick Snelder.

Broch’s story has been told ever since she announced her sudden career stop right before this season. Her body simply could not take the strain anymore, she explained back then.

She is not only missed by her former club, Györ, but also in the Dutch national team.  And so is Danick Snelder, who has not played for her club, FTC, for several weeks because of back pain.  As it turned out, the injury will cost her the European championship as well.

“Of course, it will be a handicap that Yvette and Danick won’t be there, but then others will have to take over.  I think, we still have several good line players as well as good defenders in our team,” finds Debbie Bont.

“Still, I am a bit in doubt where we stand with our team at the moment.  But, no matter what, we will have enough time to find out before we play our first match in France,” says the experienced right wing.

Just like we are used to the Netherlands playing for medals, we can also expect them to meet Norway along the way.

At the 2015 World Championship, the Netherlands lost to Norway in the final, and the same happened in 2016, at the European championship in Sweden – even though Nycke Groot & Co. were considerably closer in that game.  And, at the World Championship, last year, they lost against the Scandinavians in the semi-final.

That’s going to change this year.  As the Netherlands and Norway share the same bracket – Netherlands (Group C) and Norway (Group D) – the two nations will face each other in the main round, already.

“Actually, this may be an advantage – I think.

“The fact that we’ll encounter them in a group match instead of a game, where everything is at stake, may work to our benefit.  Although, I realize that a win will probably be as crucial.

“In any event, we will always go for victory with everything we have, in a game against Norway,” says Debbie Bont.