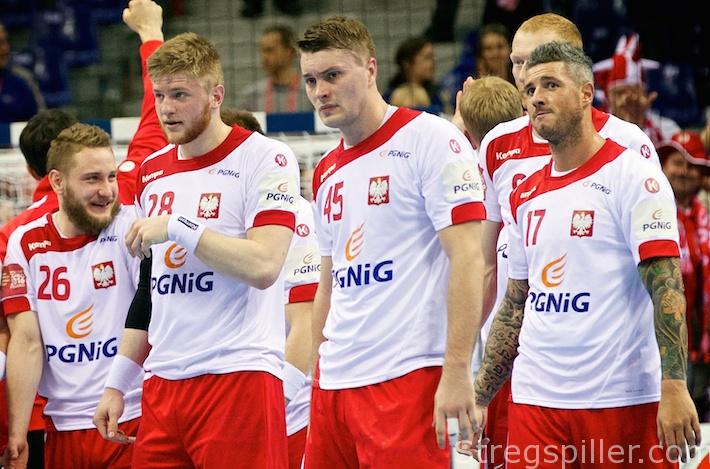 Polish Pride – Over the Top

In sports a lot depends on timing.  Do you have the right players at the right time, do injuries end all of your dreams, and can your most important player deliver at crunch time?  Apparently, Poland reached their top early, when the team won an unexpected bronze medal at the World championship in Qatar in 2015.

A year later, with 15.000 crazy fans behind them in Krakow, the team of then-coach Michael Biegler lost 23:37 in one of the craziest games in handball history, when even a 7-goal loss would have sent them to the semis.

Consequently, Biegler resigned one day after the end of the tournament and made way for Talant Dushebajev, one of the most prolific coaches in all of handball.  But even one of the true masterminds of the sport can’t do wonders.  His team, mostly consisting of players from his club, KS Vive Tauron Kielce, the reigning Champions League winner, seems to be on the way down. It looks like the squad peaked a bit too early.

Another problem of Dushebajev is the lack of capable young players.  Right now only Kamil Syprzak, the tall and at times clumsy-looking line-player of Spanish powerhouse FC Barcelona comes to mind, when thinking about future world-class players from Poland.

Sławomir Szmal, the charismatic goalkeeper who won “World Player of the Year” honors in 2009, is past his prime.  So is Krzysztof Lijewski, the 33-year old right-back, although he played a key role in his club winning the Champions League title, in May.

Karol Bielecki, who could probably participate in the hammer throw competition in Rio as well, isn’t the player he used to be.  And while he’s on the court it means Michal Jurecki will most likely sit on the bench to rest.

Jurecki will have to carry the team for most of the time, but his style of play doesn’t allow others to shine.  He’s a scorer, not a passer, and thus not a true leader that a team needs if it wants to win.  In Kielce they got Slovenian playmaker Uros Zorman or Spanish pivot Julen Aguinagalde – Poland is missing that kind of player.

If Poland wants to go far in the tournament it either needs to finish first in their group to avoid playing France or Croatia – my two favorites to come in first in Group A – or play extremely well in the quarterfinal.  It’s not impossible, but Germany looks a bit stronger than Poland at the moment and Slovenia has a very fast team, which could become the surprise of the tournament.  And let’s not forget Sweden.

Coach Dushebajev does make the team much better, although Biegler was able to make the right adjustments most of the times. But I think Dushebajev gets more respect from his players and this helps to motivate them.  Although, I must say that you have a huge problem if you can’t motivate yourself when playing at the Olympics.

As much as I like the Polish team, I think it will be very tough to make the semis-finals.  Even if the squad makes it that far, I doubt they will have enough energy left to survive another tough 60 minutes.

Missing a real world-class player in defense – sorry to Mateusz Kus, but he doesn’t even come close – could become another major issue.  Currently, going out in the quarter-final seems to be the most likely scenario.