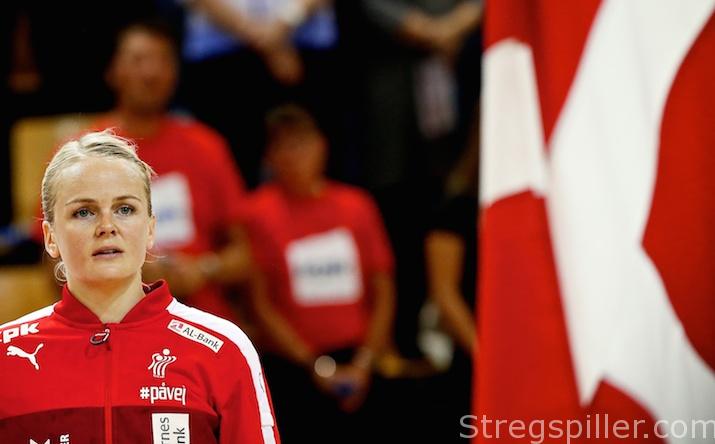 “Pressure does not bother me”

INTERVIEW – Stine Jørgensen is one of the key players who simply will have to perform if Denmark wants to be successful at the upcoming World Championship.

However, the experienced left back and playmaker is used to pressure and responsibility, in the national team as well as on the club level.  It does not bother her, she claims.

Denmark’s success at the 2017 World Championship – the tournament starts in Germany in a few days – hinges on an outstanding performance of Stine Jørgensen. It’s a necessity.

The 27-year-old versatile back-court player from Odense Håndbold is an absolute key player for Denmark. Yet, dealing with responsibility and expectations are factors she has grown accustomed to.

“I am used to playing an important role for several years now.  I am really okay with it, and I do not really feel the pressure,” she tells stregspiller.com.

Before the start of the World Championship, she and her teammates can find encouragement in their most recent major championship.

At the EHF EURO 2016, in Sweden, a year ago, Denmark reached the semi-final.  It was the nation´s finest achievement in three years.

“Yes, that was a really good championship for us, and a tournament where I felt that we developed a lot.

“I really hope we can find the same level again this time,” says Stine Jørgensen who remains cautious, when it comes to the Denmark’s chances in Germany.

“Our first objective is to move on after the group phase. This is where I keep my focus,” she says.

At first sight, this may appear a very modest objective, but a quick look at the schedule shows that she may be correct in being cautious.

In their group the Danes will be facing Montenegro, Russia, Brazil, Japan and Tunisia. The best four teams will proceed to the Round of Last 16, where The Netherlands, Germany, Serbia or South Korea could be likely opponents.  And in a worst-case scenario, the tournament could end right there.

“Obviously, we will have some difficult matches in our group, already. There are also some games we have to win.

“We simply must go on from that group. That’s the way I see it,” and this all she wants to say about her team´s chances at this point.

It is no secret that Denmark´s national coach, Klavs Bruun Jørgensen, prefers to use of Stine Jørgensen as playmaker.

But after Anne Mette Hansen´s injury, Jørgensen will also have to play left back – her usual position. It places some additional responsibilities on her shoulders.

“I have been used to it for some years now, and I am just doing what I have always done, also as team captain. To me, there is really nothing new to this.”

“Of course, it is up to Klavs where I am going to play, but the way things look, I will probably be playing quite a lot as left back as well as center back.

“Personally, I feel comfortable in both positions.

“In the national team, I have been playing the playmaker position so many times by now that I really do not give it much though anymore,” she says.

Unlike in previous years, and unlike many other players at the World Championship, Stine Jørgensen did not have any European obligations at the club level this past fall.

Over the summer, she left FC Midtjylland and joined Odense Håndbold, a club that did not qualify for any European Cup competition.

“There have been pros and cons.

“It has been really good for my body that I do not have to play two matches every week, as I was used to in the previous four years.

“However, you also get something extra from playing those tough European Cup matches, and of course, I miss playing in the Champions League.

“I hope the pay-off from not participating in these international club matches will be that I can benefit from tougher practice sessions,” she finds.

Positive change despite some problems

After four years with FC Midtjylland, she changed to the ambitious club, Odense Håndbold, ahead of this season.

Despite not playing in the Champions League anymore – at least not this season – and despite some disappointing results at the beginning of the campaign, she is still content about her decision having chosen the offer from Odense and former national coach Jan Pytlick.

“It has been a really good change, and an easy change.

“Our start may not have been exactly according to our plans, but lately things have turned around really well. So all in all, I am happy about having made the change.

“The fact that the start was not as good as we would have liked it to be did not really affect us much.

“Already before the start of season, we knew that some good signings and an apparently strong squad on the individual level, would not necessarily mean that we would have positive results from the start.

“Therefore, it did not bother us that much when we did not succeed in the matches that we should have won. But lately, things have been getting much better.

“There are still some things we need to work on, but in general, I feel we are moving in the right direction.

As Stine Jørgensen just said, Odense had a number of significant new additions to the team before this season.

Herself aside, other national team players such as Mette Tranborg, Trine Østergaard and Kahtrine Heindal joined the club along with Norwegian top goalkeeper, Emily Stand Sando, and the great Danish playmaker talent Mie Højlund.

Many of the pundits predicted Odense to win the Danish championship even before the first whistle of the season.

According to Stine Jørgensen, however, external expectations do not put any particular pressure on her or her teammates.

“No, it does not bother us at all.

“In a way, it is cool that so many people have such high expectations, but within the team it is not something we pay much attention to.

“We have our own strategy, and that is the one we follow – and as I said, I am used to pressure, and it does not bother me!”