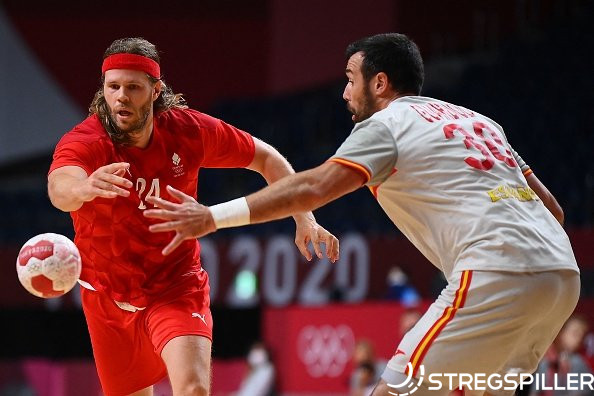 Denmark joins France in the gold medal match at the Tokyo Olympics, defeating Spain in a hard fought match of handball.

The back-to-back European champions would meet the 2019 and 2021 World champions from Denmark.

Thus far, Spain had only surrendered points against France in the main round of the Tokyo Olympics, but had to do without the help of veteran defense specialist, Viran Morros.

Denmark would enter the quarterfinal in full strength and the blemish of one loss against Sweden, during the group phase.

Spain never fully recovered from the three-goal gap Denmark opened in the first half.

Entrerrios & Co. got close on several occasions, but whenever they did get chance  to tie the game, Magnus Landin in Denmark’s goal denied any progress.

Denmark deserved the victory and  will fight France for the gold medal in a final match of handball.

Both teams tracked each other closely during the opening phase of the game, but midway through the match Denmark were ahead by three, courtesy of brilliant play by Michel Hansen.  If he wouldn’t score himself, his precision passes would find his teammates who finished what he had started.

Goal scoring was a precious commodity as both keepers – Perez de Vargas (Spain) and Magnus Landin (Denmark) – were on top of their game.  For Spain, Adrian Figueras lit their half of the scoreboard as the mobile line player recorded 4 of his 5 successful shots in the first half.

In the latter part of the half Mathias Gidsel made his presence felt and helped to extend Denmark’s lead to four before the half time buzzer sounded.

It was successive scoring of Alex Dujshebaev early in the second half that brought Spain within two goals, but once again Mikkel Hansen answered the call, scoring four of his game high 12 goals between minute 35-45.

But, Spain hung in and fought hard for every ball possession and when the 7-meter penalty shot of Aleix Gomez found the back of the net, the deficit was cut to one (54th minute).

The team of head coach, Jordi Ribera, had the chance to lock up the score, but Magnus Landin made another top, while Mensah established the two-goal margin on the other side of the pitch.

In the remaining five minutes of the match, Spain only scored one more time (D. Sarmiento), while Denmark applied pressure playing 7-against-6.

Niklas Landin in Denmark’s goal finished the game with another superb performance (38% save rate) and Mathias Gidsel once again showed up strong, but it was Mikkel Hansen on the other end of the pitch who assured that he and his teammates would fight for back-to-back Olympic gold medals once again.

Much has been said about the handball artistry and exceptional skills of Mikkel Hansen over the years, but today he played one of his most complete games, scoring on 12 occasions and delivering lethal passes.  A world class performance.