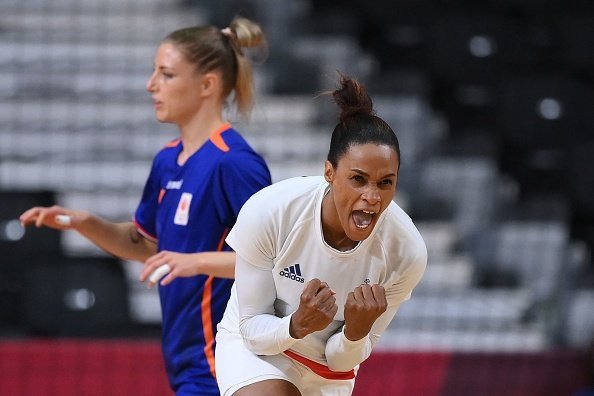 Eight scoreless minutes in the first half spelled the end of the Olympic dream for the Netherlands.  France stayed in total control and face Sweden in the semifinals.

For France the struggle to reach the quarterfinal was real as they were facing elimination in the previous match against Brazil already following a string of lackluster if not outright disappointing performances.

Was the last game of the group phase a turning point for the team of head coach, Olivier Krumbholz?

His compatriot on the Dutch bench, Emmanuel Mayonnade, would help him find the answer.  One loss in a close match against Norway and four victories speak for itself.

After a soft showing at EURO 2020, Mayonnade revived the spirit of the reigning World champions and a well playing Inger Smits as well as the temporary return of Nycke Groot have compensated for the absence of Polman and Amega on the playmaker position.

Road to the Quarterfinal

France went through to the semifinals after a dominant performance against the World champions from the Netherlands.

Goal scoring came easy and early and midway through the first half the silver medal winners of Rio 2016 were leading by ten.  By then, the game was effectively decided.

From the beginning France went to work with their sleeves rolled up, leading by seven goals after 10 minutes.

On the other side nothing seemed to work and to add insult to injury, Lois Abbingh had to leave the court with an apparent knee injury after landing awkwardly on the backend of a jump shot. Unfortunately, she could not return to the pitch for the remainder of the game.

Shortly thereafter – Tess Wester had made room for Rinka Duijndam in goal, coach Mayonnade began rotating most of his starting line-up, much earlier than anticipated.

Still, France stayed in firm control and did not lose their grip on the match until three consecutive goals by Groot, Snelder and van Wetering brought the Netherlands within four (25th minute).

For a moment it felt like France had lost the momentum before turning the tide once again, scoring three times in a row, while expanding their lead to eight goals at the break.

When the Netherlands returned they enjoyed their best phase of the game. Backed by Duijndam, who remained in goal, the Dutch were able to cut the deficit to six, but they could not improve from there.

Clinical finishes by Foppa on the line and Flippes – she had moved back to her accustomed right wing position – extended the lead of “Les Bleus” to nine goals again before taking the foot of the pedal (45th minute).

The remainder of the match the team of head coach, Olivier Krumbholz, took it easy and used the clock to their advantage.

Nearly eight scoreless minutes spelled disaster for the team in orange and the two timeouts during this time failed to make a difference.

On the other side of the pitch France exploded after a dismal first week at the Tokyo Olympics.

Everything worked to their advantage. Loose balls got in the right hands again and in goal Amandine Leynaud delivered a spectacular performance saving 51% of the shots coming her way.

In short – France was clicking on all cylinders and whatever the Dutch tried, they could not change the course of action.  Not today.