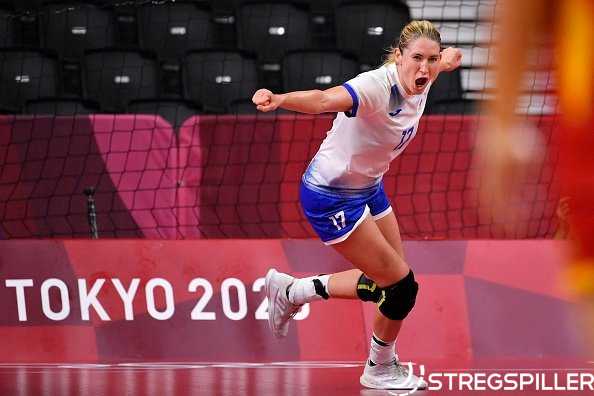 The reigning Olympic champions return to the semifinal. Montenegro put up a courageous fight, but ran out of steam towards the end.

On paper Russia were the odds-on favorites and it would just be a matter of time before Montenegro would begin to crumble.  Although, Russia’s head coach, Alexey Alekseev, acknowledged in a recent post-game interview that his team had been struggling to maintain the lead when substituting too many players too frequently.

A luxury problem, Bojana Popovic, his opponent on Montenegro’s bench wouldn’t face.  Durdina Jaukovic (left-back) and the two experienced wing players Jovanka Radicevic (right) and Majda Mehmedovic (left) would spend most if not the entire time on the court.  Determination and a relentless fighting spirit would have to compensate for a short rotation.

Road to the Quarterfinal

The victory of Russia never was in serious jeopardy as Montenegro was lacking depth to put the team led by Alexey Alekseev under real pressure.

Montenegro always trailed behind and never recovered  from the early six-goal deficit.

Russia hit a few soft spots along at the way, but towards the end Radicevic & Co. were running out of steam and the reigning Olympic champions can look forward to meet the winner of Norway vs Hungary in the semifinal of Tokyo 2021.

Russia got off to a blistering start and Bojana Popovic’s first time out came after only four minutes of play. It did nothing to prevent a six goal Russian lead (7:1) after seven minutes.

At the same time Marina Rajcic made room for Ljubica Nenezic in goal and on the other end of the pitch Itana Grbic replaced Andrea Klikovac, who would not return.

Slowly but surely Montenegro began to dig themselves out of a deep hole, although it took until the 22nd minute of the game before Nenezic could save the first shot.

Ten minutes before the half Montenegro went on a 6:3 run, cutting the deficit to two, as Russia failed to score in the five minutes before the buzzer sounded.  Collecting five two-minute suspensions did not help Russia’s cause either.

…missed her first 7-meter penalty shot in the whole tournament (!) after converting on 20 previous occasions. A remarkable accomplishment.

Although, Durdina Jaukovic and her teammates fought courageously, Montenegro never got to close the gap.

After 40 minutes – Itana Grbic had just brought her team within two again – Daria Dmitrieva answered  and Russia began to pull away for good.

Eventually, Montenegro were running out of steam and only scored four goals between minute 45 and the end of the match.

Russia had a fantastic start but the above mentioned concerns of head coach, Alekseev, surfaced again.  Once he began rotating the starting line-up his team lost rhythm and concentration.

Yet, Montenegro could not exploit this weakness to the full extent as Popovic’s bench did not allow for more.  Case in point – three of Montenegro’s players (Radicevic, Jaukovic, Grbic) accounted for 22 of their 26 goals.

For Russia the two sisters, Anna Vyakhireva and Polina Kuznetsova combined for 13, but they received plenty of support from the rest of the team and especially from Anna Sedoykina in goal (38% saves).