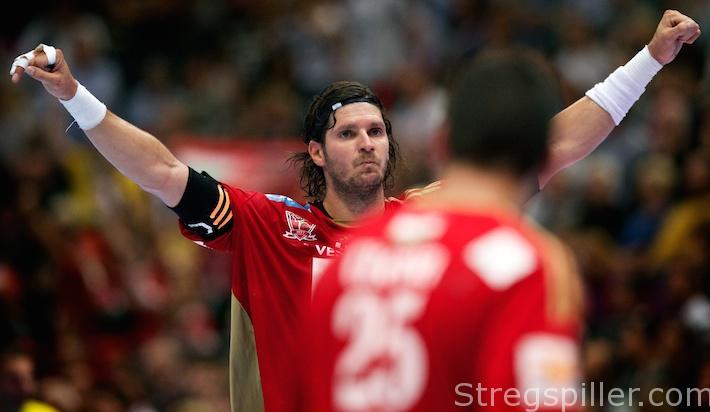 SEHA League: Ilić masterminds Veszprem to title defence in what might be their farewell season; Zagreb comes in third.

This fast developing regional competition managed to draw a large number of fans and media representatives alike, as SEHA league have announced even more improvements for the next season, following their season-ending spectacle in Varaždin.

Russian energy giant Gazprom will remain the title sponsor of the SEHA league until 2020, while there are on-going talks with new clubs to join, some teams may bid farewell to the 10-team regional elite competition.

After having difficulties reaching the final on Friday, Veszprem defeated the Macedonian giants Vardar 28:26 (14:15) to lift the elusive trophy for the second time in a row.

Moreover, the Hungarian All-Stars now boast a perfect record in the competition, having won the league in both of their seasons (2014/15 and 2015/16) since taking part.

“Vardar have today played a great match which was the icing on the cake of the Final 4.  They were amazing at the beginning of the match.  We’ve missed some of our chances and they were doing a great job scoring easy goals but the good thing of my team is that we never give up.

“Mirko was here in the end to save some tricky shots, which decided the match and we’ve taken the trophy.  I’d like to congratulate my players. It is not easy to play good (handball) all the time but today we’ve shown team spirit and commitment and that’s what matters most.  It’s been an amazing season for us in the SEHA League with a remarkable Final 4,” said the man behind Veszprem success, coach Xavi Sabate.

“I’d like to congratulate Veszprem and especially their coach who is in my opinion doing a great job.  We were better in first half – the first 20 minutes to be more precise – and later on we’ve lacked focus and they were there to reduce the gap.

Mirko Alilović and Momir Ilić were the heroes behind Veszprem’s success. The Croatian goalkeeper proved to be unbeatable in the dying moments, recording five key saves; while the Serbian sharpshooter, Momir Ilić, lead the scoring chart with seven goals. Laszlo Nagy and Ivan Slišković both added four goals to their tallies.

Croatian playmaker Luka Cindrić seems to have flourished under Raul Gonzalez and Davis Davis at Vardar this season, putting together another impressive performance and scoring five goals.  Timur Dibirov and Alex Dujshebaev followed suit with four goals each, while Arpad Šterbik managed to record eight saves.

However, Ilić left the court in Varaždin with a bagful of trophies, as he added his second SEHA League title to his Final4 MVP as well as the regular season MVP.  Ilić’s inclusion in the All-Star team of the tournament rounded off the individual recognitions of the fabled 34-year old.

Meanwhile, Zagreb were able to bounce back from the disappointing semi-final defeat to edge the third place match against Meshkov Brest just narrowly – 24:23 (14:13).

Defensive frugality ran the show, as the Croatian side took a turn for better, once again demonstrating the virtues of a spotless 6-0 defense against an injury struck Meshkov team.

“Coach Bebeshko had some injured players today, so it was not easy for them and even with such a roster they’ve managed to play a good game, which was a tight one.  We were a bit luckier today than we were in the semi-final and now after everything is done, I guess I can say that this SEHA season was successful for us,” said Zagreb coach Veselin Vujović.

The “wall of Zagreb” commanded by Tonči Valčić was matched by the towering Meshkov line-up, with the intimidating presence of right-back Dainis Krištopans recording five goals, while Rastko Stojković wrecked havoc on the line, scoring six.

“I can say I’m proud of my boys especially after such a tough match in the semi-final against Veszprem.  It is not easy to play after you lose like that. We’ve missed a bit of strength and luck to get the win, but we have what we have now.

His compatriots wearing the Zagreb uniform, Ivan Stevanović and Filip Ivić also had a night to remember with a joint effort of 14 saves.  Stevanović (eight saves) was the standout goalkeeper of the tournament, finding himself in the All Start team, alongside his Zagreb teammate Zlatko Horvat.

“This tough match is behind us, especially after our semi-final against Vardar which was really tough.  In the end, we’ve managed to prepare well for this game, played a good match and took third place which we are, of course, satisfied with,” said Zagreb’s Stefan Vujić.

All Star team of the tournament:

What’s next at SEHA League?

This fast emerging regional competition announced several improvements when the tournament returns in August.  Having made a huge step forward with the inclusion of high profile VELUX EHF Champions League contender Veszprem two seasons ago, the announced changes are going to raise the quality of the competition even further.

The contract with the patron of the competition, Russian energy behemoth Gazprom, has been extended until 2020.

The Moscow-based company will continue to invest in the SEHA League project for another four years, almost assuring that the format of the competition will remain largely unchanged.

“(Next season) the league will have 10 teams. Our foremost priority is to match the EHF calendar, followed by SEHA, and then the domestic competitions.  We have had consultations to include the two best teams from each country, not the two best placed.  It was sparked by the paradox of Metalurg being granted a wild card for the Champions League, and not for the SEHA League.  We will have all the answers on how the 10-team league will look like for the next season, until the end of May,” said SEHA Gazprom League president Mihajlo Mihajlovski.

“The league itself has earned great respect, backed by the results that we have accomplished. When we have founded the SEHA League, the goal was to gradually come close to the Bundesliga standard, and show that the best handball is played in this region. Gazprom is a world-leading energy company, and it is our pleasure that they are following us and finding joy in the success that we have accomplished. If there wasn’t a sponsor like Gazprom, we would have been hard pressed to achieve what we have done until today,” said Mihajlo Mihajlovski, and added:

“We have extended the contract with Gazprom until 2020. We have had several difficult meetings, to address what we want to achieve as well as what is expected from us.  The new goal for us is not only to get close, but to become a better league than the German Bundesliga until the end of the contract (by 2020),” added Mihajlovski.

Slovenians in, Veszprem out?

All the expenses and costs will therefore continue to be covered by the league’s sponsors, as the financial appeal of the league has been widely popular, especially among the less economically viable teams.  The format and benefits of the competition in comparison to the financially and competitively starved domestic leagues will undoubtedly raise the appeal of the SEHA League and attract the best regional teams.

However, despite boasting a vast array of top quality teams from Belarus, Slovakia, Hungary, Macedonia, Croatia, Serbia and Bosnia & Herzegovina – Slovenian teams are yet to enter the SEHA Gazprom League, following several failed attempts to lure Celje and Gorenje away from the Slovenian domestic competition.

“It is now 95% certain that two of the best Slovenian teams – Celja and Gorenje will join next year.

“The two clubs want to play in the SEHA Gazprom League, and it is very important for us that the managing board has allowed the teams to play in the SEHA League. It is, however, necessary that the decision is upheld by the association of Slovenian clubs, and confirmed at the Slovenian Handball Federation assembly,“ said Mihajlovski.

However, the inclusion of the two Slovenian top flights might be followed by the unwanted departure of the league’s leading force.   Hungary’s league has stuck a lucrative sponsorship deal with the Hungarian Lottery, which will in turn spark a significant investment in the domestic league and its teams.

One of the long-term SEHA targets, Pick Szeged, has already played down any chance of joining the league, and while no other Hungarian teams would present a quality addition, there are many calling for Veszprem’s withdrawal from the Gazprom-funded league in favour of the domestic competition.

The main reason for that being the obligatory inclusion of all Hungarian teams in the domestic league, as demanded by the new sponsor – Hungarian Lottery.

“Veszprem and SEHA have signed a two-seasons long contract, which practically obliges them to take part next season.  There have been changes in Hungarian handball, as the Federation has found a sponsor that requires all teams to take part in the national league. “

“We already had to deal with one problematic demand – to include the four best placed Hungarian teams – which has been rejected, since this not a Hungarian competition, but SEHA League.  We were unanimous that two Hungarian squads are welcome to play, and while we have gotten a written reply stating Szeged’s rejection to play, we have not yet heard anything regarding Veszprem’s position.”

“We will hold talks.  Veszprem and Hungarian Handball Federation will be given a 15-day notice to submit their reply, and notify us of their decision”, said Mihajlovski.

Issues to be addressed

However, the biggest issue remains the fact that the best-placed teams of this highly competitive league are still some way from being granted qualification spots for the VELUX EHF Champions League or any other continental club competition.

The qualification places for the VELUX EHF Champions League are still reserved for the top teams from their domestic league competitions, as SEHA League currently finds itself in a grey area; somewhere between the mostly weaker domestic leagues, and the competitions organized by the EHF.