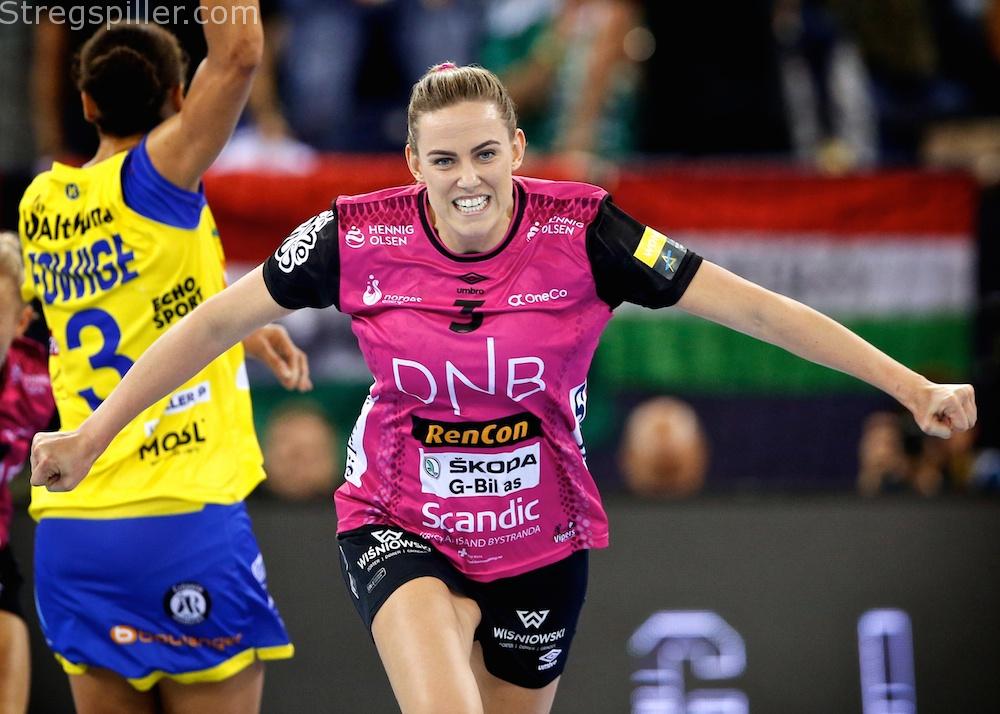 “Reaching the FINAL4 again will be tough”

INTERVIEW – Emilie Hegh Arntzen is skeptical if Vipers Kristiansand can repeat their achievement of last season and reach the FINAL4 of the DELO EHF Champions League.

The experienced left back cites injuries and a lack of stability as some of the issues that she and her teammates currently deal with.

“Reaching the FINAL4 again will be tough. Of course, it’s our dream to go back to Budapest again, but I think it will be difficult.”

Emilie Hegh Arntzen answer is straightforward, when asked how she rates the chances of Vipers Kristiansand to replicate their accomplishment of the 2018/19 season and go all the way to the FINAL4, where they finished third in May of this year.

“Last season, I doubt that there were many people, who expected us to get that far.

“This year, we do not have the benefit of surprise on our side anymore and there are many good teams out there, that have their mind set on Budapest and the FINAL4 in May,” the 25-year-old left back and Norwegian international tells stregspiller.com.

After the first half of the Champions League group phase, Vipers are second in Group A with three points from their first three matches; two points apart of top team Metz and one point ahead of FTC-Rail Cargo Hungaria and Podravka Vegeta.

Eight goals down, the back-to-back Norwegian champions were staring into the abyss early in the second half. Still, Vipers staged an impressive come back and earned a 38:38 draw.

“We got off to a fine start and went ahead by three goals, but after a timeout, Metz took control of the game and we more or less disappeared from it. Unfortunately, this has become a trend in our most recent matches.

“By the time we were eight goals down, we simply agreed to make the best of the remaining match. Apparently, this decision lifted the pressure from our shoulders – after all we took one point,” explains Emilie Hegh Arntzen, who was Kristiansand’s high scorer with eight goals.

“As the match went on, we created more space for our backcourt players and I benefited from it, especialy,” she says.

As mentioned above, the match against Metz was a good example of Vipers´ Champions League efforts this season.

The team has been lacking stability. In the opening round, they defeated FTC 31:22, only to lose 25:24 away to Podravka before their roller-coaster game against Metz.

“Yes, you are right, we have been inconsistent as of late.

“We may have become overoptimistic after our big win against FTC. Of course, we should never lose against Podravka; that was silly, simply put, and our match against Metz also showed how we lost our grip on the game.

“That’s definitely something we will have to work on before meeting Metz again, on Sunday.

“I expect a particularly tough match down there, as they will be particularly unhappy with their result in Kristiansand.

“Of course, it would be a tremendous boost for us to go to France and take another point or two. But, as I said, it will be difficult,” finds Emilie Hegh Arntzen before Vipers´s road game against the French champion.

To a certain degree, Vipers´ lack of consistency, so far this season can be explained by a very long injury list. The undisputed number one in Norwegian women´s handball has been severely hampered by injuries and currently they are still missing two of their most crucial players – goalkeeper Katrine Lunde and playmaker Henny Reistad. Neither one of them will be back soon.

“Of course, missing two essential players does have a certain impact.

“We certainly miss Henny´s way of setting up our attack and her scoring ability. Playing without Katrine has probably been even tougher.

“Her skills, her experience and her authority have saved us so often in the past, and I think it’s only now that we fully appreciate how much it means having one of the world´s absolutely best goalkeepers in our team.

“However, we cannot keep focusing on those who are not here, Those of us, who are fit, must simply make an extra effort and make sure that we’ll still be playing Champions League after New-Year, when the two of them are expected to be back,” says Emilie Hegh Arntzen.

She is also aware that the lack of opposition in the Norwegian league may be a factor, as her team is missing qualified competitors in between Champions League matches as Kristiansand play in a league of their own.

“Of course, you may conclude that this is an advantage not having to waste so many resources in the domestic league, while you play the Champions League. Obviously, it affords us the opportunity to rest some key players and to others it’s a chance to spend time on the court, a circumstance that allows our squad to grow and add more depth.

“However, as league matches are the only games that we have to prepare for the Champions League, we could need some more opposition, and I really hope that we will face some stronger teams in Norway in the near future.

“Hopefully, those Norwegian teams that play in Europe (in the EHF Cup, ed.) right now, can benefit from the experience they gain there and contribute to improving our national league,” explains Emilie Hegh Arntzen, who will turn 26 on New Year´s day 2020.

Optimistic for the World Cup

Before she can celebrate New-Year and her birthday, she will not only have to play three more Champions League games plus a number of domestic league and Cup games, but the World Championship in Japan as well. The big tournament is coming up in December and she is a key player in the national team as well, where she has scored 143 goals in 93 appearances, so far.

Like Vipers, Team Norway is dealing with injuries of several key players and already some fear a repeat of the 2018 European championship, where Norway returned from France with a disappointing fifth place. But, Arntzen is not afraid of another upset.

“Of course, we are missing some important players and we cannot deny that this is a handicap of sorts, but I still think we have a good team and a deep squad, and I do believe that many of the other teams still fear us.

“Anyway, we’ll fly over there (Japan ed.) with optimism and confidence and I am sure we’ll play a fine championship and compete for the title once again,” ends Emilie Hegh Arntzen.