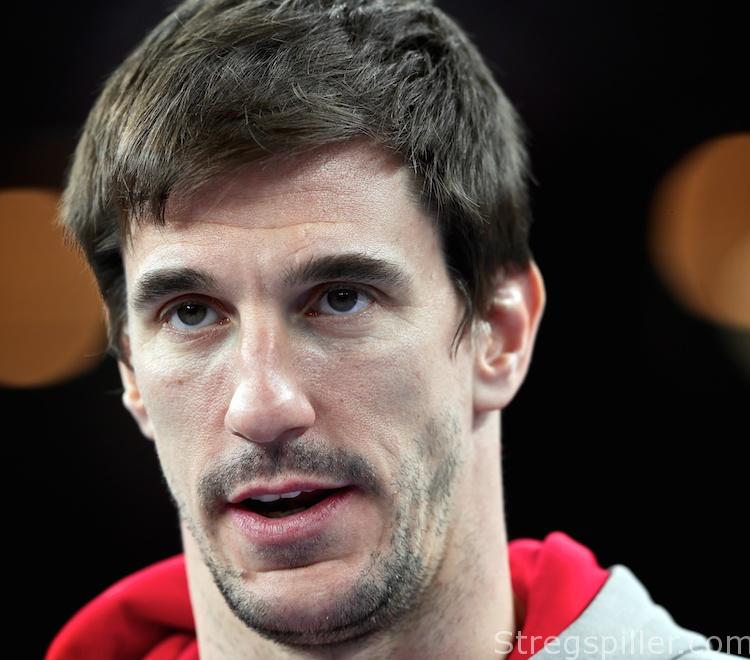 “We are ready for a physical game”

INTERVIEW – The “general” of Spain’s defense, Viran Morros, is fully prepared for a tactical and very physical semifinal against France, on Friday at the 2018 European championship.

He really is a line player.

However, when was the last time you saw Viran Morros play in offense – be it in his in his club team, FC Barcelona, or the Spanish national team?

Second-wave counter attacks aside, he usually does not cross the centerline of the pitch. 34-year-old Viran Morros is a defense specialist par excellence, and for many years Barcelona and Spain have benefitted from his talent on the back end of the court.

He has also played a significant role in Spain reaching the semifinals at the ongoing European championship, in Croatia, where the Spanish team will be meeting France, in Zagreb, on Friday evening.

“We trusted each other all the way.

“I think that’s the main reason why we are where we are, now.

“We have been working really, really hard to get here, and for us it has been a really tough tournament with many difficult games. So, we are are obviously happy having made it this far,” Viran Morros tells stregspiller.com.

The final stage of Spain´s route to the semifinals was certainly challenging, as the team played their last two main round matches within 24 hours.

Yet, one day after losing 26:31 to Slovenia, they qualified for the semifinals courtesy of a decisive 31:27 win against Germany, a team that had enjoyed two days to rest.

“I don´t want to say too much about the way matches are planned at this championship, but of course, it was not normal to play against Germany yesterday (Wednesday, ed.) after they had two days to recover from their previous match, preparing for the game against us.

“However, these were the conditions and as things turned out, we could handle it.

“We did a great job and now we are here,” says the tall defender who will be leaving Barcelona to join Paris Saint Germain after this season.

The Spaniards´ road to the semifinals has not only been tough at times, it has been a bumpy ride, as “stability” hasn’t been the term that characterizes the team´s performance best.

Along the way, Spain landed some outsized wins like 32:15 against the Czech Republic and 31:20 against FYR Macedonia, but also showed poor performances like the aforementioned 26:31 defeat against Slovenia.

“Generally, we are a young team with many new players – so obviously, these things happen.

“All in all, I think that we have played a good tournament and our efforts have taken us here – it doesn’t really matter how it was done.

“We are just happy to be where we are,” explains Viran Morros who admits to having to do some hard work as the tournament progressed.

“It has been tough at times, as we have been up against some really strong teams with some very good players in attack.

“However, the fans who have travelled here to support us, have been a great help and also for me.

“Of course, we have to keep doing well in defense, but we also depend on our goalkeepers doing well – so we can get these counter attacks that may give us those so-called easy goals,” says Morros who realizes that his country never won a European championship, yet.

“I certainly hope that we will make it this time, but we will have to take it one step at a time.

“We are meeting France in the semifinal and that’s obviously going to be a real challenge, not the least as France are undefeated so far in this tournament.

“They have a fantastic team and many great players, but I am sure we will get our chances as well,” he concludes ahead of the match against France, a meeting with lot’s of history, as the two nations met in many “must-win” matches in major tournaments over the years.

“It is not easy to say what will decide the game this time.

“All I can say is that France is incredibly difficult to play against.

“They have so many outstanding player, including two great goalkeepers and in attack, they are really, really talented.

“We definitely need to play our best (handball ed.) and minimize our mistakes, while our defense together with goalkeepers will have to perform close to perfection.

“However, as I told you earlier, I am sure we will get our chances as the game progresses and it will be up to us to take these chances,” says Morros who is prepared for a tactical as well as physical game.

“Physically we are not as strong as the French players; we are not that tall or big, but we are faster and we have good shooters on all positions.

“Obviously, we are going to fight until the end,” promises Viran Morros.