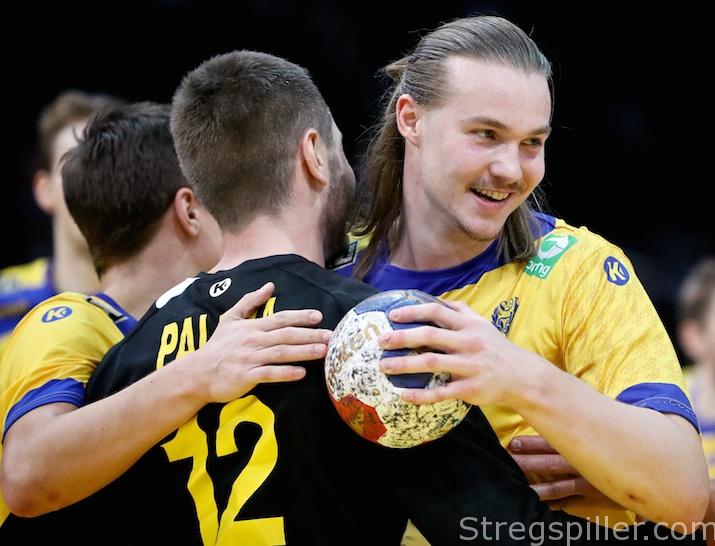 “We have a realistic chance to win the German Cup”

It’s been a roller-coaster season so far for Swedish Handball-Bundesliga rookie, Lukas Nilsson.  On Thursday, he was part of a Kiel side many had already labeled as the underdog before a second-leg tie against Rhein-Neckar Löwen, in the EHF Champions League.  But THW showed that the club still brings a lot of quality to the table no matter how many changes have been made to the roster in recent years.  Right after the match I spoke to one of the youngsters about the game, his first year in the best league in the world and the expectations for the rest of the season.

Congratulations to winning tonight and making it to the quarter finals. What made the difference over the two games?

LN: These were two amazing games by two amazing teams.  A tough fight in both games, but today we had so much fire in our eyes, that’s why we won this game.

LN: Yes – of course. Handball is a simple game, right?  Whoever wants to win the most on this level usually wins the game.  It’s easy.

It looks easy from outside, but I guess it’s not as easy on the court.  When Toft Hansen was sent off early, I thought maybe you’d be in a bit of trouble?

LN: Sure, he is a very good defense player – so, of course it caused a problem.  But we have so many good players in our team and they fight so hard every time…so it was awesome to see what Ilija Brozovic did when he came on.  To go into this game and perform the way he did – wow.  He was outstanding today, he fought for the team, and everybody pulled together, it was just fantastic.

Earlier I talked to your teammate Nikola Bilyk, who’s 20 years old, just as you are. He’s also playing his first year in the Bundesliga.  Is it all happening a bit too fast for you?

LN: Not too fast, I think.  I have had some very good games, and some matches were not so good.  I guess the tempo is okay.  It’s perfect to be here.  This year we have a young, new team, and this season is just very special, but still quite amazing.  I hope to go on like this next season and that we continue on the path we’re on right now.

Actually, there’s still a lot of handball left this season. What’s possible for your team at the REWE Final Four in Hamburg next weekend? Are you running out of gas because you have a number of players who are injured or not at full strength?

LN: Yes, some players are injured, right now.  But others are on the way back, so why shouldn’t they be ready for the Final Four?  I believe the team is good enough to win the Final Four, but we have to show the same fighting spirit that we showed today and then we have a realistic chance to win the title in Hamburg.