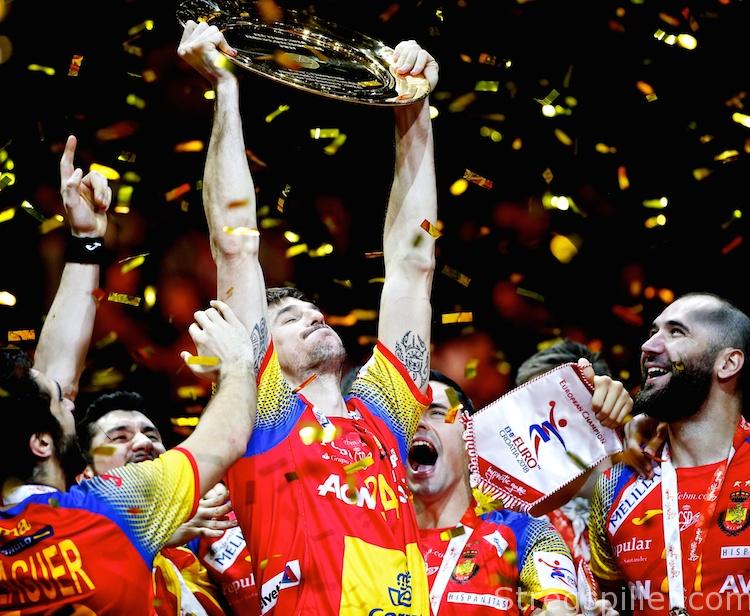 The match between Spain and Germany, in round 2 of Group C at EURO 2020, promised to be an early highlight in the competition, as a win would take either team deep into the tournament.

Uwe Gensheimer was back in the team, as he did not suffer any further sanctions following his red card in the match against the Netherlands, when his penalty shot hit the Dutch goalkeeper in the head.  Looking beyond the injured players that could not make the trip to Norway, Germany’s head coach, Christian Propkop, had his best team at his disposal.

Likewise, Spain was in full force after the victory over Latvia, two days ago.

A 5:0 run in the first half aside, Germany could not keep up with the defending champions.  The Spaniards simply outplayed Team Germany on both ends of the court and in goal, Perez Vargas (Spain) out-classed Andreas Wolff and the 2007 World champion, Jogi Bitter.

It took almost 5 minutes before Spain took the first lead in the match. Gensheimer responded immediately but then Canellas & Co. scored five unanswered goals and midway through the half Spain enjoyed a comfortable 10:4 advantage.  Coach Prokop’s earlier timeout did not show any effect and did nothing to disrupt the successful play of the 2018 EURO champions.

Rest of 1st Half

A number of turnovers, technical faults and 2-minute penalties worked for the benefit of Germany and by minute twenty, left-back, Julius Kuehn, had brought his team within one goal (9:10).  Inexplicably, Prokop’s men did not keep their concentration and loosened their grip instead and by the time the halftime buzzer sounded, Spain had re-established a three goal lead.

Germany were able to cut the margin of difference to two goals one more time (39th minute, 16:18) before the men of coach, Jordi Ribera, blew the game wide open.  Ten minutes before time, Spain had extended their lead to ten after the sixth goal of Alex Dujshebaev.

For both teams it was a critical game as a win would make the path towards a semi-final appearance in Stockholm that much easier.  Assuming that Spain and Germany will enter the main round of the tournament, only the champion of EURO 2018 will take points with them to the next phase of the competition.  Germany will have to win all matches going forward to keep the dream of a semi-final alive.

Given the lackluster performance – mildly put – of the game against Spain, such dream may just stay that… a dream. Only for a brief period of time in the first half was the 2016 EURO champion in a position to apply pressure.  The rest of the match it became quiet apparent that Spain was the better rehearsed team compared to their opponent, who was lacking precision, fluidity and a fighting spirit for most of the time.

It’s almost guaranteed that Spain will come out on top of Group C after the success on Saturday evening. The Netherlands won’t be the team that will cause trouble in their last match of the preliminary round, on Monday.

Germany will have to do some soul searching and re-group against Latvia – a do-able task.  If the humiliating performance against Spain will have some long-term effects, time will tell. Certainly, in the main round Team Germany will provide the answer to the question if today’s loss was a reality check or just a wake-up call.