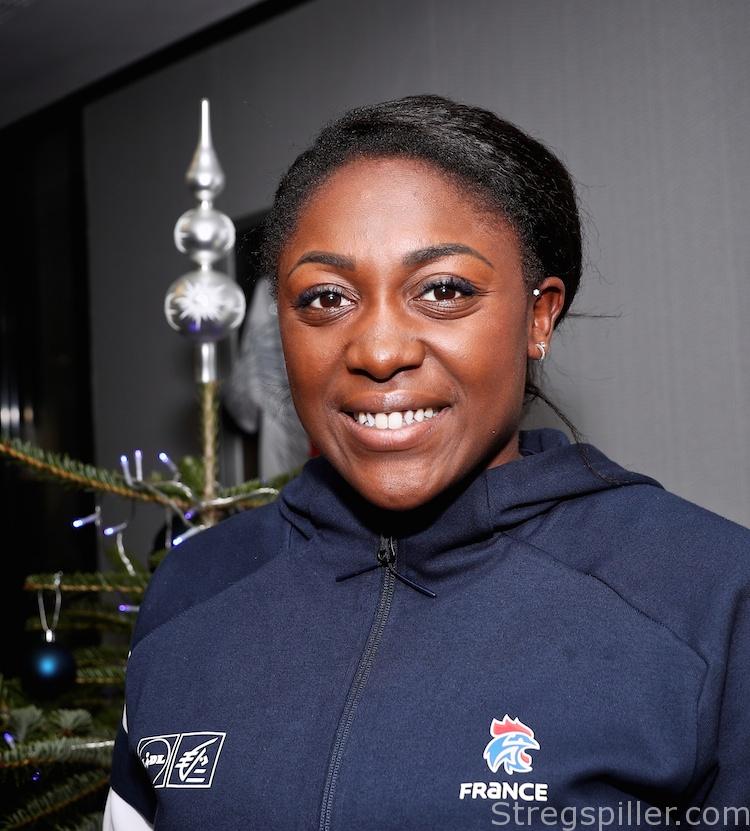 “Responsibility is fine with me”

INTERVIEW – With Tamara Horacek injured, the responsibilities of organizing the offense of “Les Femmes de Defis” at the 2018 EHF European championship rest squarely on the shoulders of Grace Zaadi.

However, the 25-year-old center back of Metz Handball is quite comfortable with the workload that she is facing at the ongoing tournament.

France is a lucky handball nation, considering that Grace Zaadi got fit in time for the European championship after her injury, earlier in the fall.

At the moment, she must be considered one of the best playmakers in the world next to Stine Oftedal and Andrea Lekic. Certainly, for France, Zaadi is one of the most crucial players in their quest for winning the European championsip, especially with Tamara Horacek missing in action.

Still, Zaadi does not feel the extra burden.

“I am fine with this role, also because I am used to this kind of responsibility in my club (Metz Handball, ed.).

“From the outside it may look like my responsibilities have grown, now that I am playing in the French national team, but I am really okay with everything that goes along with it.

“It’s a big thing to be the playmaker in the French national team at a European championship, on home ground.

“The fact that we play on home soil makes the competition even more significant for us, and I am so grateful to be a part of this mission,” Grace Zaadi tells stregspiller.com.

“Playing a European championship is really exciting and I hope we will do well, not the least as we passed a prominent milestone last year by winning the World Cup. I really hope we will do the same here in France and bring home the gold,” she says.

After the opening loss (26:23) against Russia, France improved their performance in all three matches that followed; circumstances that add to Grace Zaadi´s optimism.

“Yes, of course, we have more confidence now and even though we know that all teams at a European championship are strong and that it’s very difficult to win a gold medal, we believe in ourselves.

“Obviously, we will do all we can, to succeed in this championship,” says the playmaker who agrees with those who claim that winning a European championship is much harder than becoming World champions.

“Yes, I totally agree with it – the strongest teams are to be found in Europe. At a World Cup there are several other nations and some of them do not play at a high level. Therefore, the answer is ‘Yes’ – the European championship is a much more challenging competition.

“For me winning the European championship will be an even bigger triumph compared to the World Championship in 2017,” she confirms.

Stepping into the limelight

When talking about handball at the national team level, in France, we are used to talk about the men´s squad, who have won medal after medal and title after title for many years. More recently, however, the French women’s team has made inroads.

After celebrating silver at the 2016 Rio Olympics, they took home a bronze medal later that same year, at the European championship, in Sweden. And, their finest achievement, so far, followed at the 2017 World Cup, in Germany.

Have Dembele & Co. finally stepped out of the long shadow of the men´s team?

“You know, for us it has been great to have our men´s team serve as a role model of what’s possible and what can be achieved.

“Their success has motivated us, in trying to accomplish the same as they have done over the course of the years, and I think we are on a good path as well, as we took medals in all three of the most recent competitions.

“Actually, when I look at our men´s team performance, it makes it even more important for us to get a gold medal at home – now.”

“We realize that we already dropped two important points along the way and that has put us under some pressure.  And, when we look ahead, we still face some of the very best teams there are and we obviously have to beat them, if we want to achieve what I have been talking about.

“If you want to be the best, you have to beat the best – so, I am really okay with the situation as it is,” she reassures.

Unlike most top players, she has remained dedicated  to the same club over many years.

In fact, she has been playing in Metz Handball even since her late junior years, and she confirms that part of the reason for her prolonged stay has been her need to feel secure.

“For me, it’s important to be happy in life and feel safe. So, ‘yes’ that’s definitely part of the reason.

“However, I am also a very loyal person and as long as I am satisfied and my ambitions are in alignment with the objectives of the club, I see no reason for a change.

“On the other hand, there is no guarantee that I’ll be staying in Metz forever. After all, I am only 25 years old. Many people think I am older, but I am actually still young,” she laughs.

“For me it’s most important to keep progressing all the time and if that means that I have to make a move and leave Metz tomorrow, in order to improve my career, I would do so,” says Grace Zaadi.