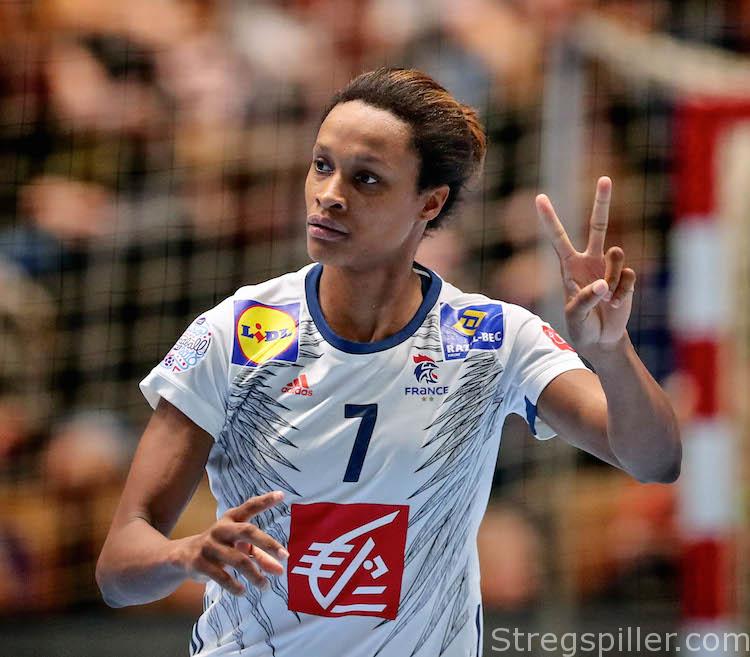 We’ve proven that we are able to succeed, not only once but repeatedly”

INTERVIEW – Eleven years ago, Allison Pineau took part in her first international competition for France, at the tender age of 18. It was a big one; a major event for French women handball: The 2007 World championship on home soil.

“A lot of things happened since then, but today it’s water under the bridge.

“I remember being really excited about it, but also having to sit back and learn and watch the older players.

“The atmosphere was crazy with all the fans backing us up – I expect more of the same at EURO 2018,” she says.

As the center-back points out, a lot of things have changed since then. In 2009, she was elected IHF Player of the Year, she traveled across Europe, made stops in Valcea, Baia Mare – just to name a few – before settling down in Brest (France), two and a half years ago.

Now, that the EHF EURO, in France, is rapidly approaching, her role in the French team has changed as well.

” I bring my experience and my knowledge of handball to the youngest players in the squad.

“They have the energy and the talent, but they also know that they can rely on players like me, or Amandine Leynaud, or Camille Ayglon, when things are getting tough.

“It’s important to have both sides (youth and experience ed.) to balance a team,” she says, sounding like a 30+ year old veteran when, actually, she’s only 29.

After suffering an ankle injury in 2017 and her decision to get surgery to be fit in time for the tournament on home soil, her come-back at the World Cup, in Germany came as a surprise.  Driven by her ambition, Pineau was key in the final games of the competition.

“This gold medal has increased my appetite for success even more,” Pineau says.

“You always want to win and get medal after medal. Especially, when you see how the French men’s handball team has been performing – you really want to match it.

According to all the players, the base line from where to measure French success is the year 2016.  A few months before the Olympics in Rio, the coach was replaced and, all of a sudden, the team was back on track.

“That’s when our momentum began – it would be wrong to think that our success story only dates back to Germany 2017.

“Since Rio, we brought back a medal every time – we’ve been following through well, I think.

“And now we want to confirm it all at EURO 2018, for multiple reasons and especially because we’ll be playing in front of our fans,” she explains.

Home court has not always been an advantage at the European championships, as the hosts of the more recent tournaments have not reached the semi-finals since 2012, in Serbia. Could there be a curse for hosting nations?

Judging by the amount of journalists who were present at the press conference, on Tuesday, there may be another risk, that players’ minds begin to wander… away from what needs to be done on the court.

“Playing at home adds to the pressure. When you host such a tournament, you want your team to be in the spotlight and show your best to your fans.

“But, you have to turn this pressure into something positive, so it boosts your confidence,” says the Brest player.

The opening game against Russia will be indicative, how France will handle the stress. Yes – it will be a replay of the 2016 Olympic final, but Pineau is quick to point out the difference.

“Different players, different adventure – of course, we want to beat them but that’s not revenge by any means,” says Pineau, who acknowledges that confidence is running high at the moment.

“The results of the past have increased our self-confidence.

“We’ve proven that we are able to succeed not only once but repeatedly.

“On these achievements we’ve built and we have improved step-by-step.

“Competing at home and having won the last international tournament means that we are the favorite. And, I won’t shy away from the responsibilities this statement implies,” she concludes.