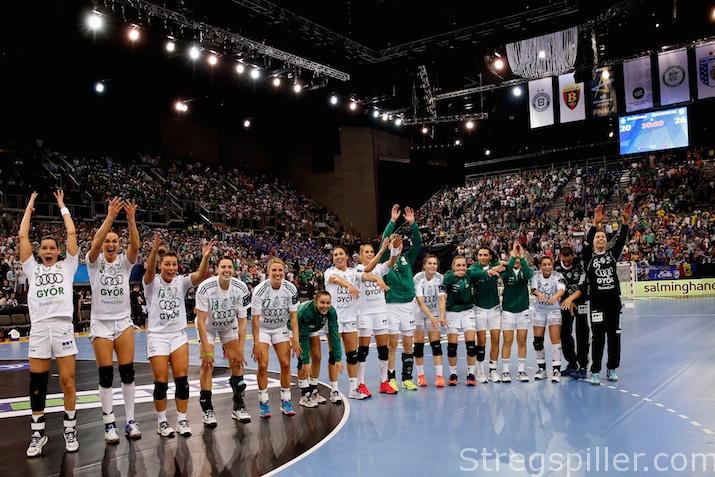 Györ got their revenge against Rostov-Don and clinched main round berth, but they had to work hard for it. Metz suffered their first defeat while Vardar’s record remains flawless.

Defending Champions League winners Györ avenged their earlier loss against Rostov-Don and booked their main round ticket. Despite leading 11:5 and 22:17, the Hungarians had to fight hard for the two points.

Round 4 saw Metz Handball suffering their first defeat, while Vardar had some trouble at home against pointless Larvik. But in the end the Macedonian champion managed to take their fourth straight win.

Although, the Hungarian champion was leading by five and six goals along the way, Györ kept 5,500 spectators on edge, before they could celebrate their deserved victory at Audi Arena.

Not until Stine Bredal Oftedal made it 25:23 with 55 seconds left on the game clock was the matter decided.

With limited options due to the aforementioned injuries, Györ coach Ambros Martín did his best to rotate his squad, providing his key players with some rest from time to time.

For a while, he played 4-2 when in attack, using both line players, Yvette Broch and Anja Althaus, at the same time.

He also moved Anita Görbicz from left wing to the playmaker position. He could afford it, as 21-year-old Szidonia Puhalak showed an impressive performance on left wing.

Rostov-Don´s French coach, Frederick Bourgeant, had far more alternatives than his Spanish colleague, but at first he did not make much of it.

His team was only able to follow Györ in the opening phase of the game (3:3), before the home team went up 8:4 and 11:5.   Actually, Rostov were fortunate trailing by four goals only at the half time buzzer.

From the start of the second half, Györ continued to dominate, and it was hard to see, how Rostov would come back into the game.

Györ went up five once again (21:16 and 22:17), but at that point, it looked as if the home team was paying the price for their narrow squad.

Even though Ambros Martín did all he could to provide some relief, his players´ physical resources were coming to an end after all.

Rostov-Don played seven-against-six for the last 10 minutes, and a 22:17 Hungarian lead was reduced to 22:21, eventually. Ana Paula Rodrigues had cut the deficit to one goal on a penalty shot with less than seven minutes left to play.

And with a minute and a half left, Rostov even had the chance for the equalizer, but Eva Kiss in Györ’s goal denied Alexandra Barbosa, while Stine Oftedal sealed victory with a quick under arm shot.

It was certainly not written in stone that Buducnost would win this match against a strong Metz.

The team of coach Mayonnade had shown impressive and consistent form until their visit to Podgorica, on Saturday night.

However, Buducnost´s uncompromising defense succeeded in spoiling Metz’ offense, and without being able to find their rhythm, the French champion became an easy victim to Dragan Adzic´s clever tactics.

The Norwegian playmaker was here and there and everywhere, when FC Midtjylland defeated Brest Bretagne for the second time in two weeks – 27:23 at home, this time.

With 12 goals, Kristiansen put her impressive mark on the match, along with a stellar Sabine Englert in goal.

This time – it must be said – Brest was a disappointment. After three rather good performances and close defeats, they did not appear to believe in their chances this Saturday afternoon, in Ikast.

Now, it will be very difficult – maybe impossible – to proceed in the tournament, while FC Midtjylland can look forward to the main round, already.

It had no significance on the result, but that did not make Amandine Leynaud’s save any less spectacular, when she lifted her leg even higher then Arpad Sterbik in his best years, stopping an open shot from Larvik, in Vardar´ 30:27 home win.

With two match days left, six teams are ready for the main round.

CSM Bucuresti and Krim (Group A) have both qualified, Györ and FC Midtjylland (Group B) and Vardar as well as FTC (Group C) have booked their tickets for the next round, while no team has advanced from Group D, yet.

In Group A, Nykøbing should be able to move on when visiting Vistal Gdynia already Friday, while CSM are expected to book another two points for the main round despite playing away against Krim.

In Group B, Györ will be travelling to Denmark facing Midtjylland in Ikast – where the Hungarians suffered their only defeat in their entire Champions League campaign, last season.

Brest Bretagne have a last chance to keep their main round hopes alive when receiving Rostov-Don. For the team of coach Bourgeant a draw will suffice to reach the main round in France, on Saturday.

In Group C, Vardar will face their toughest task so far in the group matches, when they meet FTC in Budapest. Before, Thüringer HC and Larvik will square off in a deciding match for the last main round ticket.

Group D will have thrilling matches in store after the most recent results. Tension will run high before Vipers host Metz, Friday night, while Bietigheim take on Buducnost, on Sunday.