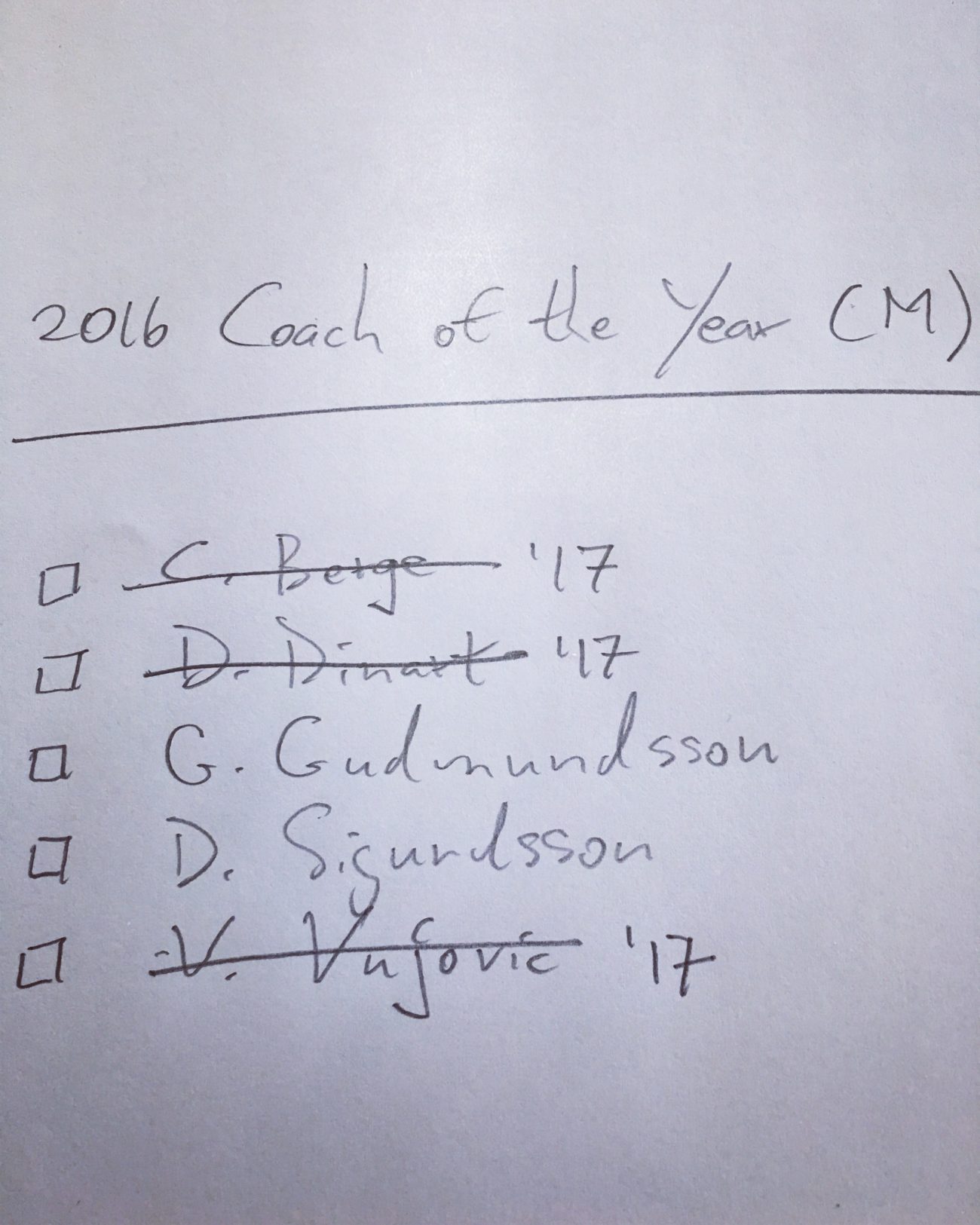 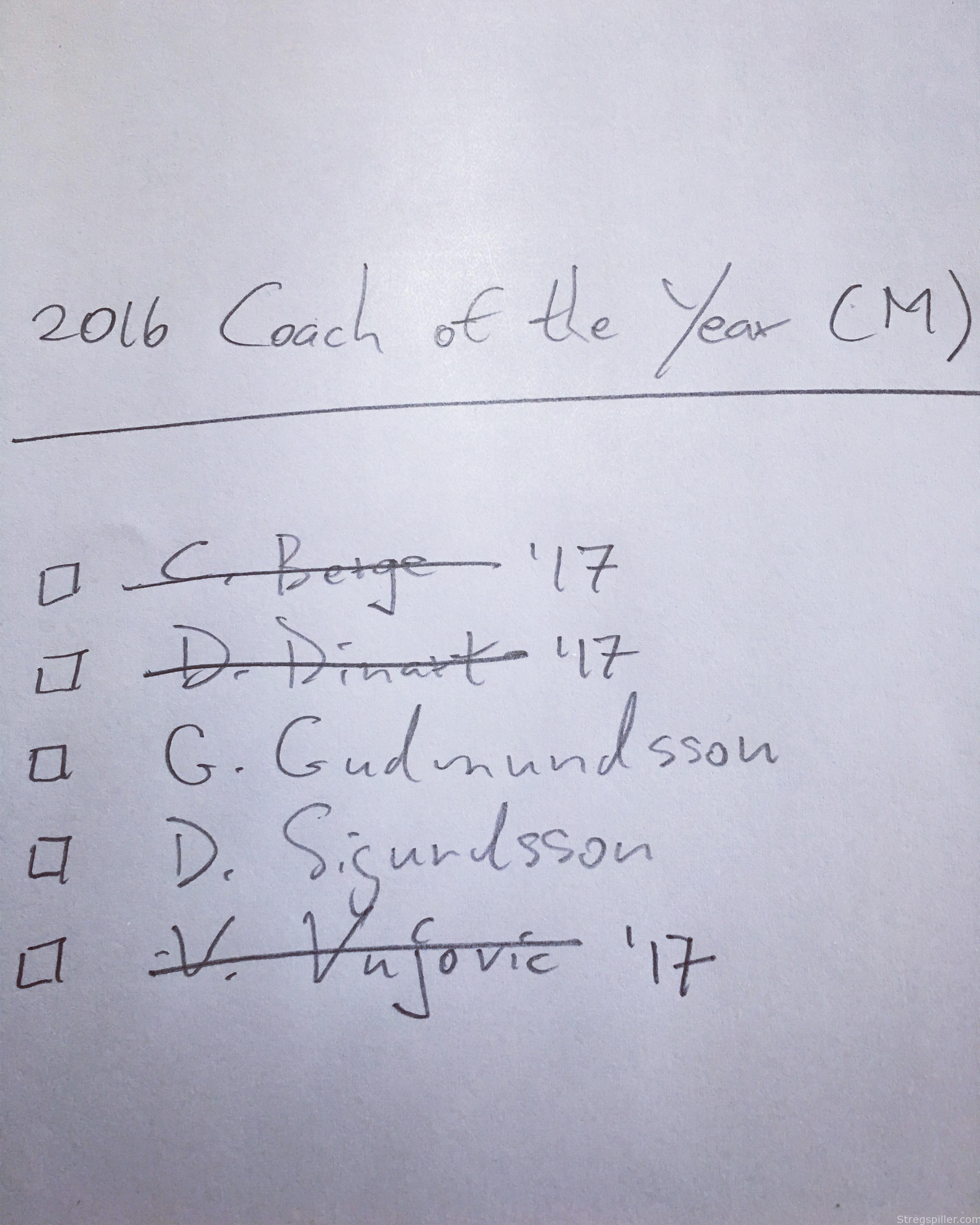 Just recently the IHF announced the shortlist of nominees for the World Handball Player of the Year 2016 award. While the nominated players raise some question marks, the list of coaches on the men’s side I find unacceptable.

But first, I will take a look on the women’s side – ladies first, as it should be.  Here the IHF did a decent job selecting a deserving pool of candidates.  There’s absolutely no doubt at all that Nora Mørk (Norway), Cristina Neagu (Romania), Nycke Groot (Netherlands), Isabelle Gulldén (Sweden) and Kari Grimsbø (Norway) showed amazing performances in 2016.  All of them either won a major title or dominated the game almost every time they took to the court.

Mørk won the European championship and a Bronze medal in Rio, Groot was named the MVP of the Olympic games, while Gulldén succeeded in the Champions League with underdog CSM Bucharest, while taking the scoring title.  Grimsbø won everything that Mørk  did, and she also reached the final of the Champions League.  Which leaves me with Neagu, who in my view is a true “game-changing” player – possibly the only one.  It’s a tough choice, in 2016 I’d probably put Gulldén over Neagu by a hair.

No complaints either when I look at the nominees for “Wold’s Best Women’s Coach”.   Thorir Hergeirsson (Norway), Olivier Krumbholz (France), Evgeniy Trefilov (Russia), Henk Groener (Netherlands) and Kim Rasmussen, who coached both CSM Bucharest and Hungary last year, made the list – all worthy candidates.   My choice is Rasmussen, because he was able to lead CSM Bucharest to the most upsetting Champions League triumph in recent history.

Now it gets interesting, as I focus on the men’s side. Nikola Karabatic (France), Mikkel Hansen (Denmark), Domagoj Duvnjak (Croatia), Sander Sagosen (Norway) and Andreas Wolff (Germany) made the cut.  Let’s check the facts first – Karabatic, a two-time winner of the award, just as Hansen, won a Silver medal in Rio and the French league title, but he wasn’t even the best player on the French team in Brazil – my no means.   Is his name more important than his performance?

Hansen, meanwhile, took the Gold medal in Rio and made all the difference for the Scandinavians.  While Denmark totally under-performed in Poland, Mikklel Hansen’s value was on display at the Final 4 of the 2016 Champions League.  When PSG coach Noka Serdarusic decided to bench Hansen for almost the entire second half of the semi-final against Kielce, he made an important contribution to PSG not reaching the last match of the tournament.

Duvnjak, is a tough case, to be honest.  His abilities are beyond doubt.  He’s a fantastic athlete and a great guy to talk to.  But fact is that his club didn’t win a single title for the first time in ages and Croatia lost in the Rio quarterfinals after winning the group.  Sure, a third place at EURO 2016 is  fine, but he didn’t make the All-star team in Poland.  So when you compare his performances of last year with the ones of other potential candidates, he just does not make the list – plain and simple.

It all leaves me with Sagosen and Wolff, two of the fresh faces in handball.  The Norwegian wizard is a joy to watch. He still has to gain some experience on the top level, but he did prove his talent in France at the recent World championship.  But that was in 2017, wasn’t it?  Last year he had an excellent EURO, but he didn’t compete in a major league, like Germany or France.  He also didn’t play a single minute in the Champions League or the Olympic Games.  You get my drift.

Wolff, along with Hansen, is the only true and worthy candidate, as he dominated throughout the whole year.  He was the driving force behind a stunning German victory at EURO 2016, he then won a Bronze medal with the “Bad Boys” in Rio and showed that his move to Kiel was the right choice as he did not have any problems adjusting to a higher level, on a consistent basis.

So who else could have made the list?  I have two names for you, one of them is a no-brainer.

Tobias Reichmann – he had a breakthrough year, winning the European championship, making the All-star team while adding a Bronze medal in Rio.  He also succeeded with Kielce, winning the Champions League, scoring on all of his nine shots in the amazing final against Veszprem in Cologne.  He should have made the award list, without any doubt.

I also think that Andy Schmid should have been on there.  I know Switzerland is not really doing a lot of great things when it comes to international handball, but how can you overlook his importance to his club Rhein-Neckar Löwen?   They won their first league title in club history, also because of his outstanding leadership and brilliant passes.   Single players should not be omitted or overlooked just because their national team isn’t doing great. Otherwise, how could have Kyung-Shin Yoon or Filip Jicha ever won the award?

My choice is obvious – it’s Wolff, because his performance in Poland was just too good to be true, especially in the last game against Spain, when he “shut the door” on world-class players like Victor Tomas, Valero Rivera or Julen Aguinagalde.  I might be biased as a German, but could you argue Wolff winning the award?  I don’t think so.

There is one category left and it actually is a most questionable assembly of names (the two Icelandic coaches aside)  I’ve seen in handball in a long time; certainly when considering the year 2016.

Yes, Didier Dinart made the cut for World Coach of the Year 2016”. The very same Didier Dinart who acted as head coach in two – yes, in two – competitive games for France last year – one against Lithuania and one against Belgium.

And where is Talant Dujshebaev?  As far as I remember he won the Champions League with Kielce and made the semi-finals at the Olympic games, leading an over-aged Polish side in their last attempt to reach glory.

The coach of the 2016 Champions League winner doesn’t make the list, are you kidding me?  What happened?   Did someone at the IHF just roll the dice to come up with some names by coincidence?

It’s time for more transparency.  And performance should matter, not marketability.