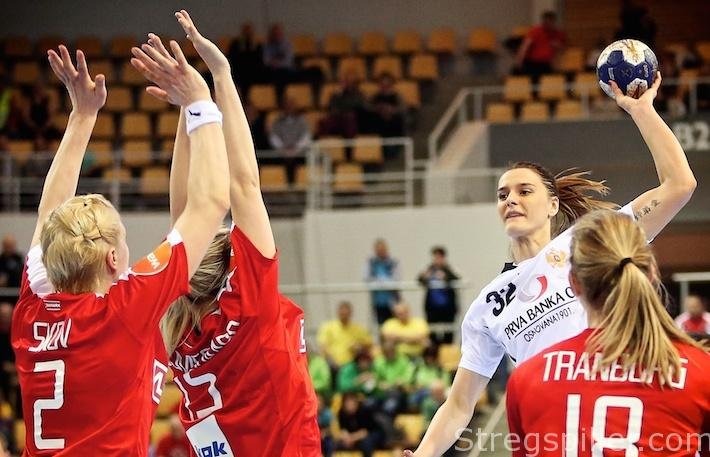 Romania and Montenegro made sure that the final matches in their Olympic qualification group, in Aarhus will be of no importance, as both teams managed to book their Olympic tickets already on Saturday.  A decisive win for Montenegro against Denmark leaves no room for surprises.

The outcome was assured beforehand.  The squad from Romania is so much better than Uruguay, that there was absolutely no doubt about their victory before throw-off.  The Romanians came off a convincing performance and a clear 32:25 win against a disappointing Danish team on Friday evening, while Uruguay had done well in the first half against Montenegro, but were run over 34:19, after all.

Despite of playing with their substitutes throughout the 60 minutes, Romania had no problems cruising to an even bigger win, than Montenegro did against the South Americans, the previous day.

Despite Uruguay´s fine start against Montenegro, Romania´s coach Tomas Ryde decided to start the game with his reserve team. Still, it appeared to be a good idea from the Swede, as the substitutes were quite keen on doing well, while his regular starting line-up might have taken things a bit easier.  Of course, we will never get the true answer – fact is, that the Romanians were particularly efficient intercepting Uruguayan passes, that resulted in a number of easy goals.  Just like in the match against Montenegro, Uruguay scored the first goal, but that was all for the Latinas, who soon went down by five.  It would not get any better.

Coach Ryde continued with his bench players and they thanked him for his confidence by keeping up the heat, while increasing their lead, as the last 30 minutes progressed.  The Romanians fans remained as dedicated as the players on the court.  A goal is a goal and deserves to be celebrated, no matter who the opponent is, and no matter how big the lead.

For Romania, an unimportant match awaits against Montenegro on Sunday, while Uruguay will continue their learning process against the Danish hosts.

It was “do-or-die” for the Danish hosts – and even a win could possibly not be enough to save their Olympic dream, following their disastrous performance against Romania.

Montenegro, on the other side, did not have to spend many physical resources to defeat Uruguay (34:19) in their opening match. Coach Adzic could even afford to rest his key players during the second half, which gave the Montenegrins an additional advantage.

Romanian and Montenegrin fans could join in theirs celebration, as the result assured both nations a slot in the Olympic tournament, in Rio de Janeiro, later in August.  The outcome also means that the Sunday’s matches will be of no significance, whatsoever.  Even though Denmark left a better impression when compared to the game against Romania on Friday night, they were unable to score a much-needed victory.

At first, this offensive formation appeared to be working well. Keeping a 6:0 defense formation also looked like a good idea from Bruun Jørgensen.  However, it did not take the Montenegrins long to “read” the Danes and take the initiative as well as the lead. Coach Jørgensen kept changing the lineup without finding the key to bring his team back into the game.  On the other side, the Montenegrins were keen on taking the pace out of the game and slow things down.   They did so successfully and by half time Katarina Bulatovic & Co. enjoyed a three-goal lead.

It was a much-improved Danish team that came out of the locker room after the break.  Denmark’s defense was considerably better and Rikke Poulsen showed up in goal.

During the early part of the second half, Denmark managed to reduce the deficit to one goal several times, and with 11 minutes and 50 seconds left, right-wing Trine Østergaard provided her team their first lead since 2:1, as she made it 20:19.  However, Denmark´s Olympic hopes were extinguished as quickly as they appeared.  The hosts did not score in the following nine minutes, while Montenegro put up six consecutive goals.

At 25:20, Montenegro was “through”, together with Romania, and a large part of the 3,349 spectators began to leave Ceres Arena, way before the final buzzer sounded.

Literally, Montenegro can book the tickets for the Olympic games in Rio together with Romania.  Sunday’s encounter with Neagu & Co. has been reduced to a test match.  For Denmark, all that’s left is making sure to beat Uruguay and avoid finishing 4th.  Not at all what the hosts had hoped for.