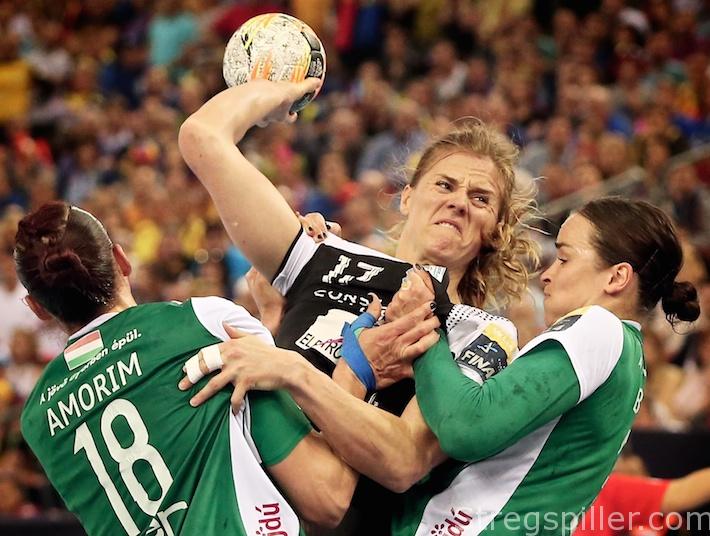 Much to the surprise of (almost) the entire world of handball, CSM Bucuresti won the Women´s Champions League in 2016.  Not nearly as many people will be astonished, if they repeat the triumph this season.

CSM Bucuresti took everyone by surprise last season, as they came from behind to win the Women´s EHF Champions League.  Only the most die-hard CSM fans had seen this coming after the Romanian champions reached the quarter-finals while finishing only fourth in their main round group.  Not even two sensational one-goal wins against Rostov-Don in the quarter-finals changed the prospects ahead of the FINAL4 in Budapest.

Still, following the impressive 27:21 win against Vardar in the semi-final, not many experts gave them much of a chance in the final against Gyor.

And we all remember, how the final turned out. After a nail-biting match and two periods of extra time, CSM won 29:26 after penalties.

It was a tremendous personal triumph for head coach Kim Rasmussen.  Thereafter, Rasmussen moved on to take charge of Hungary´s national team and has been replaced by another Dane at CSM – Jakob Vestergaard.  And Vestergaard knows how to win the Champions League.

He has done so twice with Viborg, in 2009 and 2010, and given the quality of players that he has at his disposal in the Romanian capital, no one should place any doubt that he will be able to repeat Kim Rasmussen´s achievement.

Even stronger than last season

Jakob Vestergaard has taken over a team that appears to be stronger and certainly deeper than the crew who won the Champions League back in spring.

On left wing, Majda Mehmedovic, has joined from Buducnost to replace Danish international Maria Fisker.  She is yet another reinforcement, and with experienced players such as Carmen Martin, Aurelia Bradeanu and Cristina Varzaru CSM appear stronger than ever.

They will need all this strength from their first group match onwards.  CSM was drawn to Group C, together with Rostov-Don, Gyor and FC Midtjylland as their opponents.   Jakob Vestergaard and his squad will be challenged from the very start.

Still, they will be able to face these challenges, and their main round group – expected to include Larvik, Savehof and Esbjerg – will not be an obstacle on the road to the quarter-finals either.

Depending on CSM’s ranking in the main round, they may run into an unpleasant competitor in the quarter-final, but it will take a strong team to defeat CSM this season.

CSM will make it to the FINAL4, and they are definitely a contender for the title again, although one or two other teams may be the more convincing candidate to lift the trophy.

What do you do when your top left-wing player leaves?  You hire one that’s even better, of course.

When Danish international, Maria Fisker, left after the Champions League triumph and a second successive Romanian championship in the spring for Randers HK, CSM signed Majda Medmedovic instead.

The 26-year-old Montenegrin international is most definitely a very substantial reinforcement to the team of CSM.  Furthermore, her arrival from Buducnost may change the balance of power between CSM and one of their most competitive rivals for Europe’s handball throne.

As if CSM were not strong enough already on their right back position with Danish international, Line Jørgensen; French international Camlle Ayglon has arrived from Nice to back-up the big Dane.

Her experience and strong defense skills will complement Jakob Vestergaard´s squad even further.

Is it a coincidence that we only name foreigners as the three most outstanding players?

But we simply have to mention Isabelle Gulldén – and not only because of her impressive efficiency from the penalty spot.  A skill that CSM benefited from greatly in the Champions League final back in May.

With her ability to read the game and to create her own scoring opportunities, she is a complete playmaker.  CSM should consider itself lucky that the 27-year-old Swedish international decided to extend her contract with the club ahead of this season.