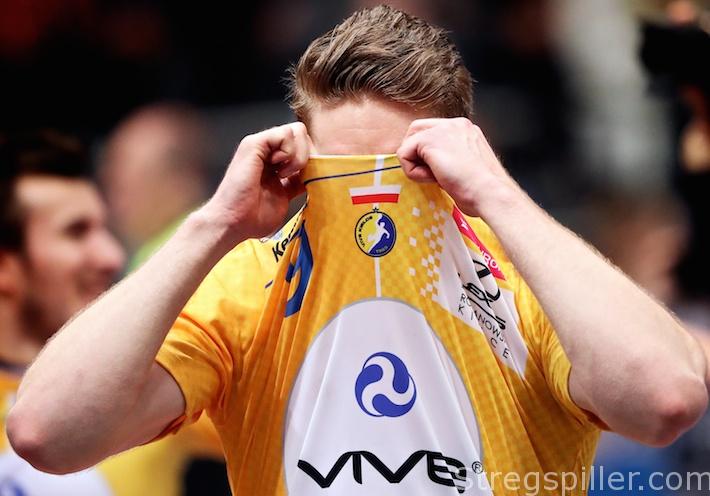 MATCH OF THE DAY – Kielce lived up to the “rule” that a defending Champions League winner won’t do a repeat in the following year.

Once upon a time, a five-goal lead was not a whole lot to take with you into a second leg game, in the Champions League.  In recent years, however, things have changed, and it has made live easier for the visiting teams.

After winning 33:28 at home, last weekend, Montpellier had a fine chance to pull a sensation, sending the ruling champions out.

Even on home ground, catching up with a five-goal deficit, for Kielce it appeared to be some mountain to climb.  And as it turned out, it was.

The first one hit Montpellier, who were in control, leading by two goals only to see Kielce cruise past them towards half time.

The second – and deciding break-down – hit Kielce, when they were leading by five goals before letting victory slip out of their hands.

In the end, Montpellier could celebrate, clinching a Champions League quarter-final berth, after winning in Poland by two.

The half time break came at the best possible time for Montpellier – and the worst for Kielce.

The home team was about to completely smash their opponents in the last minutes of the first half, scoring seven straight goals before the buzzer sounded.

Actually, Montpellier seemed to be in firm control after neither team was able to take the initiative in the opening minutes of the match.

In fact, Montpellier was in the lead at 4:2 and 11:9, leading by seven goals in aggregate, before the first meltdown in the game.

Montpellier virtually stopped playing handball, and the last seven goals of the first half belonged to Kielce who were almost even by the time the players went to the locker rooms.

At first it looked like the break had not done much good for Montpellier.

Kielce still were the dominating team, and by the 39th minute, Manuel Strlek had provided that crucial five-goal lead for the home squad, when he made it 19:14.  At that point, Montpellier appeared beaten.

Missed shots, wrong decisions and technical errors were part of the host’s game.  The visitors said “thank you” and caught up.

And when Jure Dolenec and Bingo increased the score to 23:20 for the team from the south of France, the matter was decided.

Kielce caught up one more time at 23:23, but it was too late to turn the tables.

The sensation was perfect, and in the final minutes of the match, Montpellier built their lead while celebrating their quarter-final berth.

The possibly most over-rated coach in the world of handball – Talant Dujshebaev – lost again, ending a miserable season for Polish handball.

After the failure of the national team at the World Championship, not to mention Wisla Plock’s Champions League exit after the the group phase, Kielce had to leave the tournament in the round of Last 16 – prematurely.

To French handball, Montpellier´s triumph obviously was a further boost to an already outstanding year. For the first time, France has two teams in the quarter-finals of the Champions League.

“Extremely shaken Flensburg cheat the gallows”, read the headline of my colleague Björn Pazen on Eurohandball’s website after Flensburg secured their quarter-final access following a tough fight against Meshkov Brest.

Simply put – I could not have said it any better!

With four minutes left in the game, HC Meshkov Brest were leading 26:24 at Flens Arena, and at that point Flensburg´s 26:25 win in Belarus, a week ago, had lost its significance.

However, scoring the last four goals in the match, the North Germans actually did cheat the gallows and proceeded to the quarters courtesy of a 28:26 victory.

Just like in the first match against Pick Szged, Bjerringbro-Silkeborg were only able to perform well in the first half.  The Danish champions were leading 16:14 at half time, also because of a fantastic buzzer-beating, direct free throw, from Nikolaj Markussen.

Saturday’s matches had not produced any upsets, as Paris Saint-Germain qualified for the next round through a 35:27 home win against Nantes, while Veszprém ran over Zagreb, 29:19.

Just as in 2014, when Flensburg won the Champions League, the team of coach Vranjes will be meeting Vardar Skopje in the quarter-final.  A good omen?

A true classic awaits Kiel when they meet FC Barcelona for a second time in this Champions League season, while Montpellier will try to continue their amazing streak against Veszprém.

Am I the only one who can hardly wait?