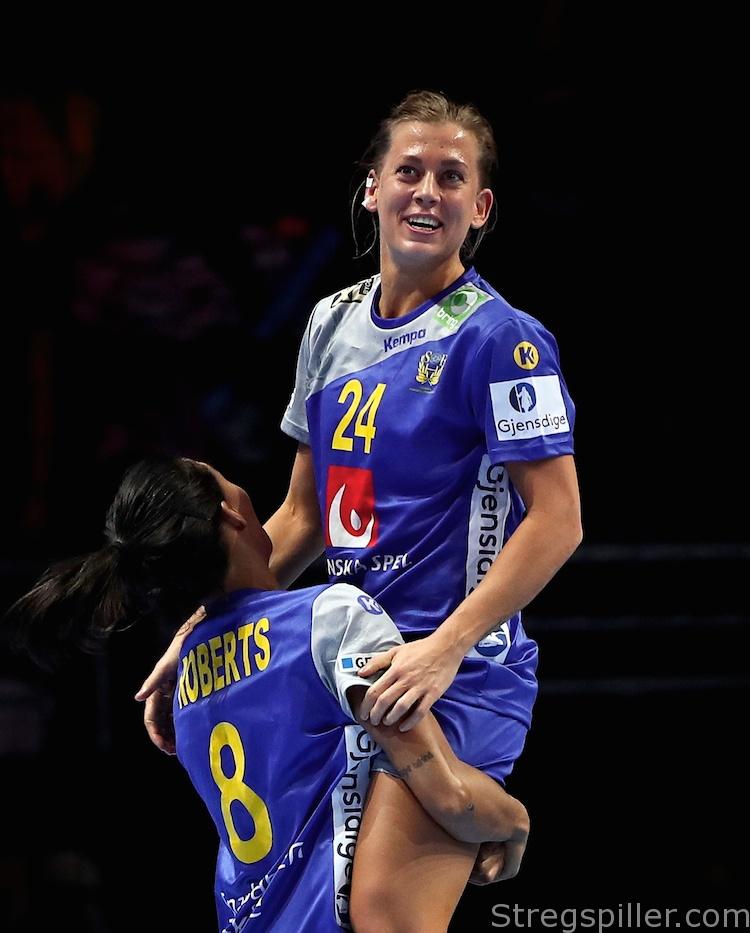 Russia with historic loss against Sweden

MATCH REVIEW – With no less than 17 goals on 18 attempts, Nathalie Hagman played an outstanding role in Sweden´s victory over Russia – a win with a historic dimension.

*Russia were already in the semifinals but still had the group win to play for.  Yet, the real question was how much Dmitrieva & Co. would invest in the match and if Evgenij Trefilov would rest key players for the final round of the competition, on Friday.

*After Montenegro´s defeat against Denmark earlier that day, Sweden´s frail hope to reach the semifinal was still intact.  It would not only require a win against Russia and a Serbian victory against France, but Sweden had to catch up with the French goal difference, which was 10 goals better

It became quite obvious that Russia were not interested in winning the match, but that should not take away from Sweden’s excellent result, and a memorable performance of Nathalie Hagman, scoring  17 goals on 18 attempts.

Sweden’s success left the door to a semifinal appearance open; an outsized Serbian win against France was all that was needed.

Head coach Trefilov started  the game with his best outfit, but this did not prevent Sweden from having the upper hand throughout the first half.

But, Russia did not take the match lightly, as evidenced by an early timeout when they were down 6:4.  Unfortunately, the short break didn’t pay off, as the Nathalie Hagman show began to take form.

The right right wing from CSM Bucuresti, scored no less than eight goals – she was just brilliant.

Still, as Trefilov kept searching for solutions, Russia managed to get back into the game (17:17), but Carin Strömberg’s buzzer beater handed Sweden a one-goal lead.

The remaining 30 minutes of the game became downright embarrassing, as a much improved Swedish team trashed the 2016 Olympic champion.

Nathalie Hagman continued her one-woman show and towards the end of the match, Sweden’s advantage even reached double-digits on a couple of occasions.  Eventually, the nine-goal loss turned into Russia´s biggest defeat ever in a European championship match.

“I think we played very well, especially in attack – still, I am amazed that we could win this big.”

“I am a little bit disappointed.

“We should be able to play better and matches like this one should not happen – we simply have to try better and harder going forward.”

In the semifinals, Russia will meet the Netherlands, the winner of Group II, while Sweden will play for fifth place in a Scandinavian derby against Norway – the team of coach Hergeirsson did not make it to the semifinals for the first time in 18 years.

Despite losing a five-goal lead along the way, Denmark  kept a cool head in a hectic finish and defeated Montenegro by one.

“I think this was a great comeback considering our recent poor performances.

“After our match against Russia we looked each other deep into the eyes and I think you could see the fire today.

“Even though Montenegro caught up with our five-goal lead, I wasn’t nervous, as we were in control on the defensive end.

“I think this was a good lesson for all of us, and showed what we are capable of, if we are present mentally and concentrated.”

“Denmark deserved to win, as they probably played their best match in this tournament.

“We got off to a very poor start and even though we did much better in the second half, it was just not enough.”

Nothing – as both teams will be heading home.