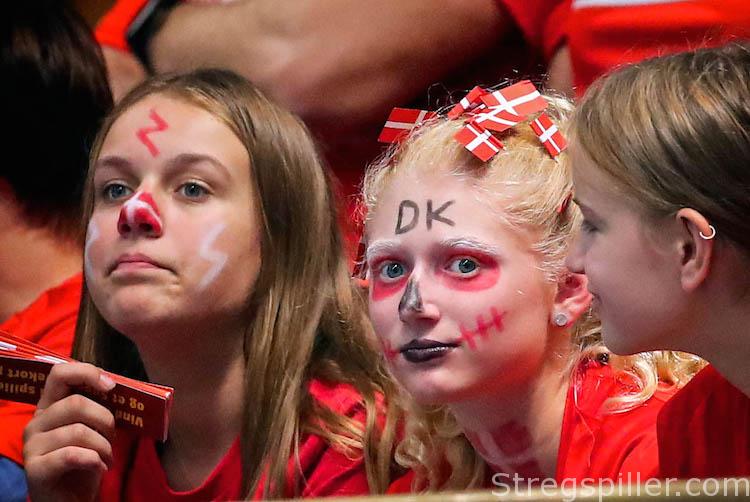 ANALYSIS – All three of the Scandinavian countries will enjoy “home court advantage”, at least to some extent, for almost the entire 2019 World Championship.

Recent achievements also indicate a successful tournament for Denmark, Norway and Sweden – but not all of them will benefit equally.

Lady Luck was touching all three Scandinavian nations at the draw of the upcoming World Championship.

The Danish host as well as Norway and Sweden were all drawn into the easier bracket and will play all their matches in the preliminary- and main round in Denmark, where all three of them will feel at home.

For Denmark it’s a given, of course, but neither Norway nor Sweden will have to deal with a truly “hostile” environment, except for the games when they face the home team.

Such outside factors have led to increased expectations in all three Scandinavian countries, and their recent achievements on the international stage only add to it.

Two years ago, Norway finished as the runner-up at the World Championship in France, while Sweden took the silver medal at the EHF Euro 2018, and Denmark, of course, are the ruling Olympic champions.

Just a brief look at the group stage makes it crystal clear that two of the three Scandinavian teams will make it to the semi-finals – but can they go any further than that? Let’s see.

The Danes were unable to hide their smiles at the World Cup draw in Copenhagen’s City Hall, on June 25, last year.

A preliminary group including Norway, Austria, Chile, Tunisia and Saudi Arabia explained much of Denmark’s joy back then. Only Norway will pose a serious threat that could jeopardize Danish ambitions of winning the group.

Looking further ahead into the main round, Sweden, Hungary and Qatar are the most likely opponents Mikkel Hansen & Co. will have to deal with.

But, recently such smiles just turned into a smirk because of the troubles around the right-back position.

Denmark´s two best players who occupied the position in the past, Kasper Søndergaard and Mads Christiansen, have said “good-bye” to the national team long ago, and the next in line, future Rhein-Neckar Löwen player, Niclas Kirkeløkke, is injured and Peter Balling has not been in form during the fall season.

All of this leaves national team coach, Nikolaj Jacobsen, with Nikolaj Øris (Bjerringbro-Silkeborg) and Mads Larsen from PAUC (France) as his next best options.

In Denmark´s test matches, Øris has done remarkably well, but he may leave the team during the tournament, as his wife is about to give birth before the end of January.

Meanwhile, Nikolaj Jacobsen has indicated that he would try a right-handed player on this position, at least during parts of the game, but so far he has not put the idea to use.

Other injuries only add to a situation that must described as sub-optimal, as line player, Henrik Toft Hansen, is sidelined with a muscle injury and he won’t be seen in action until the group “final” against Norway on January 17th, and maybe not until the main round.

His presence will not only be missed in attack, but on the other end of the court as well, where his older brother, Rene, together with Henrik Møllgaard now form the central block in defense.

There’s also some reason to worry about left-back, Nikolaj Markussen, who sustained a foot injury in Denmark´s last test match against Hungary, this past Sunday. Coach Jacobsen must feel somewhat relieved that Mikkel Hansen is back in the Danish camp after becoming a father over the weekend.

The injury list is completed by right-wing, Hans Lindberg, who is nursing a calf injury, but the veteran player of Füchse Berlin is expected to be fit for Denmark´s opening match against Chile.

Injuries are not the only problems the Danes have to worry about. Mental stability may be a factor as well that has to be taken into consideration.

Lately, Team Denmark have lacked stability over the course of 60 minutes and shown a tendency to all of a sudden underperform. It was highlighted once again in their last test match against Hungary.

After defeating them 33:19, Denmark collapsed in the first half against the same opponent only three days later. The Hungarians were leading by as many as nine goals, before the Danes caught up, limiting the loss to three goals (28:25).

Some may argue that test matches are not the real deal but dismal performances have not eluded Denmark even when it counted. Here are two examples. Both occurred at the European championship, in Croatia, a year ago.

After defeating Hungary 32:25 in convincing style, the Danes ran into a “road-block”, recording a sensational 28:27 defeat against the Czech Republic. And, after four fine performances in a row, the phenomenon repeated itself in the semi-final, where a depleted Swedish team, playing without a proper backcourt line, managed to defeat the Danish favorites 35:34 after extra time.

In summary – Denmark can hit rock bottom, it’s certainly within reach as the team has demonstrated in the not too distant past. Can coach Jacobsen help to get rid of the bad habit?

Norway – not injury free either

Winning the silver medal at the 2017 World Championship has created a taste for more. In the upcoming World Cup, Norway will be put to the test at least twice en route to a semi-final – against Denmark during the preliminary round and Sweden in the main round .

Norway do have a strong and deep squad, but they are being hampered by injuries as well and some players have only recently returned to the court.

Right-back, Kent Robin Tønnesen (Veszprem) – he was easily replaced by Harald Reinkind (THW Kiel) – is only the latest casualty.

There are bigger question marks behind those names, who only recently returned to the court.

Is line player, Bjarte Myrhol, already in top form or close to it? The Skjern veteran has been out for most of the fall season and the same applies to right-wing, Kristian Bjørnsen, and the backcourt players Gøran Johannesen and Christian O´Sullivan.

The fact that Sullivan is even able to play the World Championship is amazing as he was expected to miss the tournament only some days ago. He can provide welcome relief for Sander Sagosen, who certainly cannot play ten games at full speed and still be the asset for the team that he is supposed to be.

Still, Norway have every right to feel optimistic before a first ball is thrown in Herning, where they will be playing their first eight matches of the tournament – and if all goes well – a final or a bronze medal match.

One of the reasons explaining such confidence is Alexander Blonz.

The 18-year-ol left-wing from 1st Division club, Viking, made headlines this past weekend, when he scored seven goals on eight attempts, in Norway´s 36:29 win against the Netherlands.

It’s fair to assume that young Blonz won’t be playing in the second best of Norway’s leagues much longer.

At the 2018 EHF Euro, Sweden suddenly popped up and took the silver medal after many years of trying.

In Croatia, the Swedish team demonstrated how to win the right games. In fact, they lost as many matches – four – as many as they won. Yet, it was enough to secure a silver medal, although they did not stand a chance against Spain in the final match, in Zagreb.

Last year’s success in Croatia has led to elevated expectations in Sweden as well, and if “Tre Kronor” can repeat the performance of 2018 they may go far once again. Just as their Scandinavian neighbors, they’ll enjoy the advantage of an easy program during the first phase of the competition.

However, to go deep into the tournament, Sweden’s goalkeepers will have to reach the same level, as they did at the European championship.

The goalkeeping duo, consisting of Rhein-Neckar Loewen’s, Mikael Apelgren Andreas Palicka, must be at their absolute best and so must be their 6-0 defense formation, to lay the foundation that will allow those fast-breaks.

Lukas Nilsson, Simon Jeppsson and Kim Ekdahl du Rietz – national coach, Kristjan Andresson, has three left-backs at hisdisposal with very different qualities, but on other positions, especially when in attack, Sweden will facechallenges when playing six-against-six.

The Frank Sinatra of handball

Of course, we will have to spend a few words on Kim Andersson as well.

After joining Ystad, where he almost disappeared from the “handball radar screen”, the 36-year-old is back in the national team once again – just like Frank Sinatra returned on more than one occasion.

Just as “Old Blue Eye” who announced his farewell several times, only to make one comeback after the other, Kim Andersson has announced his retirement from Sweden’s national team time and again, only to change his mind in die course – just as he did this time.

The obvious question is what can we expect and how much will the Swedish team benefit from his on-court presence? The next two and a half weeks will provide answers.

As I stated earlier, there is next to no doubt that two of the three Scandinavian teams will make it to the semi-final and in my opinion Denmark and Norway will make the cut.

These two teams will then have to leave their comfort zone in Herning and play the semi-finals “on the road” in Hamburg.

Given the proximity to the Danish border, Denmark maybe OK but at least for Norway (if they make it) a final four appearance may be a real “road” match, if Germany qualify for the semi-final – a circumstance that I am not convinced of happening.

The team of head coach, Prokop, is a dark horse that certainly should not be underestimated, not the least because of home court advantage at this stage of the competition. Still, my favorite teams to reach the semi-finals from Groups A and B are France and Spain.

Some of the pundits argue that France will be missing Nikola Karabatic, but the 2017 World champion are so much more than Karabatic these days – they will be a contender for the title once again.

And so will be Spain. The ruling European champions still look very strong.

In my book, the semi-finals at Barclaycard Arena will be France versus Norway and Denmark against Spain.

If both – Danes and Norwegians – can overcome such strong opponents and make the final an all-Scandinavian affair, Herning’s Boxen Arena will be on fire, on January 27th.

It’s wishful thinking – my head tells me that we will see France and Spain competing for the top prize. In the end, the Scandinavian teams won’t have what it takes to go all the way – they’ll fight for bronze.