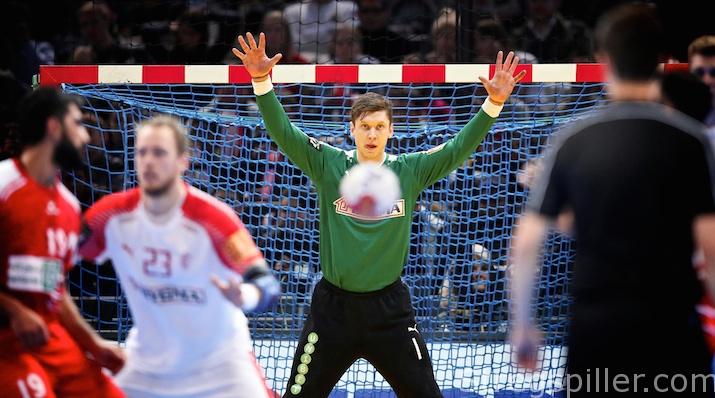 For many, maybe for most it’s the key position in handball, it’s the one between the pipes. If you can field a good, maybe even a great goalkeeping tandem, you’re on the right track to form a winning team. But putting a goalkeeper on the bench, especially one of very high quality, is a great risk. Goalkeepers have big egos. Just take a look at Thierry Omeyer, the French legend, who is arguably past his prime, and still doesn’t want to take a seat even during blow-out wins.

Actually, Omeyer is a very good example of the “risk” that a great goalkeeper brings along.  Maybe he’s the extreme example, but I remember a game during last year’s EURO in Poland when France was winning by a mile and back-up Vincent Gerard was sitting on the bench because then-head coach Claude Onesta didn’t have the guts to to take out his long-term number one.  Times have changed since then, as Didier Dinart has different ideas.

All right, maybe with the national teams it’s a bit different, because you only see each other every now and then and you try to win at any cost once a year, or twice every four years, when Olympic games are scheduled.  But on a club level it’s a ticking bomb.  How long can it work that two big egos will live with shared playing time peacefully?  How long before the explosion goes off because of trouble in the locker room or other animosities?

I remember the 2006/07 season when German powerhouse THW Kiel fielded the possibly best goalkeeping trio of all time, especially in retrospect.  Omeyer had just joined the club, but right from the start he established himself as the clear number one.  Henning Fritz, who had won the World championship with Germany, in January 2007, decided to leave Kiel after six years. Lack of form – but mental reasons played a role too, as he claimed later on.

Mattias Andersson, the Swedish shot-stopper, was happy to join the roster back then as well.  Now that’s what I call a nice choice to have.  One year later, Andersson had seen enough and opted out, heading to TV Großwallstadt, a decent team back then.  He preferred to play for a spot in Europe while doing his part, rather than sitting on the bench most of the time.  These days he’s showing his talents almost on a weekly basis for SG Flensburg-Handewitt.

Which leads me to the conclusion that the reward is obvious.  It’s almost impossible to have a bad goalkeeping performance over 60 minutes if you are able to sign two quality keepers.  Obviously, THW did a great job handling the situation back then, but could do so only for one season, because everyone was focused on winning.  Kiel won the domestic league, the cup and also lifted the Champions League trophy for the first time in club history.  The risk paid off.

Today, the world’s best goalkeeping tandem is once again wearing the uniform of the “Zebras” – maybe not a coincidence.  Andreas Wolff joined THW Kiel last summer and it didn’t take him too long adapting to his new home.  His performances in the Champions League and for the national team continued on a very high level.  Meanwhile Niklas Landin is not known to be an understudy to anyone. How long can this partnership co-exist?

Time is not on their side.  Should the club end up without a title for a second straight year, questions will arise.  Wolff is a charismatic individual, while Landin has a calmer personality.  Still, he is extremely ambitious.  Of course, it could all work out, because Wolff and Landin are so different.  But there is one thing that unites both of them – they like to play.  If they find a way to put their egos aside, club and fans will be celebrating trophies again very soon.  But with goalkeepers you never know – especially when Wolff enters his second season.