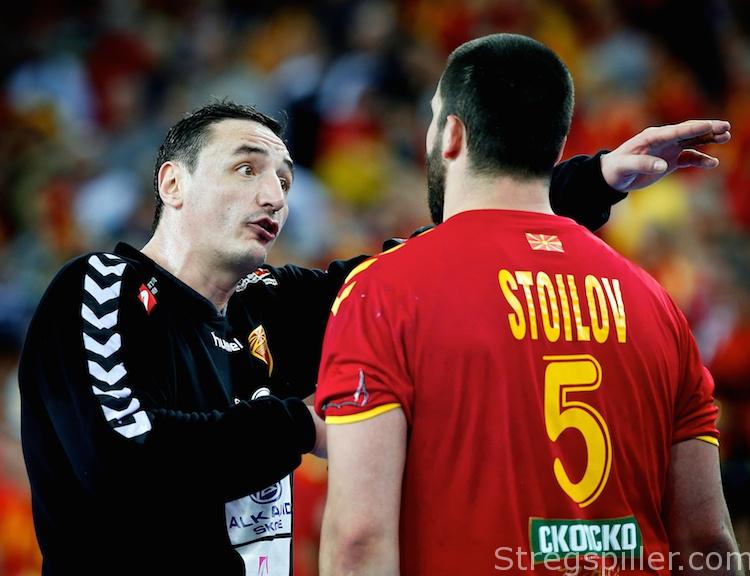 “Seven-against-six does nothing good for handball”

INTERVIEW – Macedonian goalkeeper veteran, Borko Ristovski, is no fan of playing seven-against-six when in attack; a tactic his team practiced quite a bit against Germany in their last group match, at the European championship.

“It may have earned us a point, but it does nothing good for handball,” the 35-year-old says.

FYR Macedonia began their last match in Group C at the 2018 European championship against Germany playing seven-against-six and staying with it for most of the match.

Afterwards most of the pundits agreed that this measure was crucial in Macedonia managing a 25:25 draw.

“Macedonia surprised us with this tactical move, and it took us some time adjusting to it,” admitted Germany´s coach Christian Prokop.

However, there is at least one player on the Macedonian team who will never become a fan of this tactic – Borko Ristovski.

“You can play that system in one game like today against Germany, for instance, but it is not something that should be part of a team´s regular tools.

“We practiced it against Germany, but that was because we realized that their defense was so strong that we would not have a chance six-against-six otherwise.

“They have big defenders who block very well, and they have magnificent goalkeepers, while we do not really have any great shooters.

So, tactically speaking you can use it once in a while with success, like we did against Germany” explains the 35-year-old goalkeeper from FC Barcelona.

“I agree that it may have earned us a point against them, but in general it does nothing good for handball.

“It does not even have anything to do with handball!

“You may still have to work two minutes to score a goal, and 1 second later you risk the ball landing in your own empty net.

“The system is okay to use for 10 minutes or so, if you are in desperate need to catch up.  Or you may practice it for more or less an entire match, if you are short on solutions six-against-six, like we did against Germany.

But no serious team plays seven-against-six all the time or on a regular basis, and I am happy that my coach in Barcelona, Xavi Pascual is no fan of this system either,” Borko Ristovski further remarks.

Leaving playing seven-against-six aside, he points towards another important reason why Macedonia finished on top of Group C.

“I am deeply impressed that so many came her to support us, and I am overwhelmed by their enthusiasm.

“What can I say – I cannot praise them enough.

“They help us a lot and without them, we would not have been able to get a draw against Germany.”

“Zagreb is my second favorite city, as I come here for private reasons quite frequently and I have a lot of friends here – I also feel welcomed by this city.

“The people here are friendly and helpful, and I would like to thank the Croatian fans in this tournament as well.

“It almost feels like playing at home, partly due to our own fans, but also thanks to the support of the many of the Croatian fans,” he says.

“Our team spirit is all we got”

Sitting on three points Macedonia will start on top of Group II in the main round, where Spain, Denmark and the Czech Republic will be waiting.

Still, the experienced keeper sees his team as the underdog, and he will not rule out the possibility that Macedonia will play seven-against-six again.

“When you have no chance playing six-against-six, you have to find another solution.

“We are not Spain and we are not Denmark.

“Our team spirit is all we got, but I can guarantee you, that you will see us fighting from start to finish in every match of the main round, just as we did during the group phase.

Then, we will have to see where it takes us.” ends Borko Ristovski.