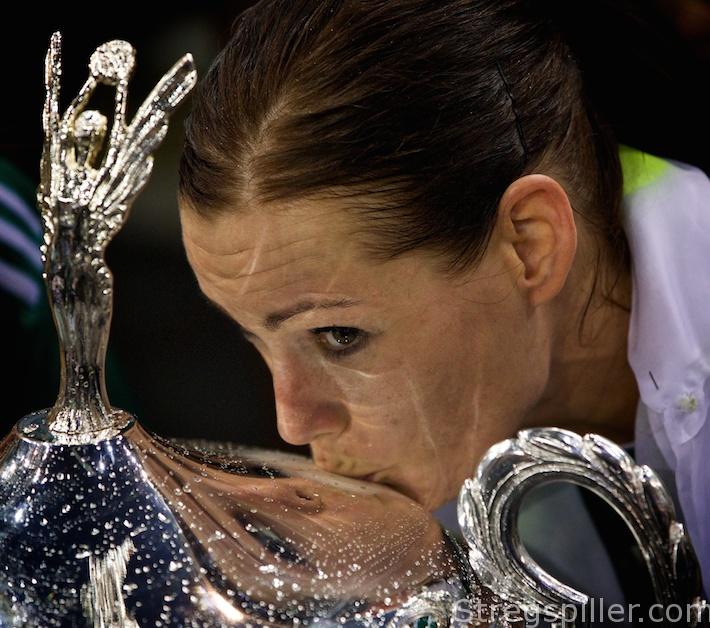 Match of the Week – Champions League (W) Round 5

Both teams were under meaningful pressure to secure valuable points for the tournament’s Main Round after they both suffered defeats at home earlier in the competition.  Vardar was also seeking to revenge a humiliating 27:22 loss to Gyor on the very first game day of the 2015/16 Champions League season.

After an even start, it did not take long for Vardar to take the upper hand.  From the get-go, the visitors from Macedonia demonstrated that they meant business and were serious about avenging the defeat suffered at home, some weeks ago.  Although Gyor fought back, the first half belonged to Vardar, getting ahead by three goals before heading to the locker-room.  The situation could have gotten worse for the home team if Gyor’s coach Martín Ambros had not replaced Kari Aalvik Grimsbø with Eva Kiss in goal. Sending Anita Görbicz on to the pitch with eight minutes to play helped too.

From the start of the half, Kiss´ saves in addition to Görbicz´ goals and perfect passes changed the match decisively.  By scoring no less than seven unanswered goals, Gyor changed a 14:17 half-time deficit into a 22:18 lead.  Still, Vardar managed to strike back and at 25:25, the teams were equal again – a nail-biting and thrilling end was in the works.  Gyor went ahead by two goals but with 45 seconds left, one of Vardar´s best players in the match, right-winger Jovanka Radicevic, could draw even one more time – 27:27.  With Andrea Penezic suspended after receiving a red card, Vardar had to play the final 12 seconds with one player less.  The last of Anita Görbicz´ many brilliant passes found Heidi Løke on the line, and the experienced Norwegian international did not fail and thrilled the vast majority of the 5,089 spectators by scoring the winning goal.

Anita Görbicz did not manage to change the game right away, when she took to the court late in the first period, but as the second half progressed, she shaped the outcome of the match decisively – not only considering her eight goals but because of her superb passing.  The Queen of Hungarian handball is certainly back!

Decision of the Match

The two Swiss referees Arthur Brunner and Morad Salah had the courage to give a player from the home team a two minutes suspension after only 30 seconds!

Surely, Gyor obtained a feeling of satisfaction after being robbed of a repeat FINAL4 appearance in the 2014/15 season, by Vardar.  More importantly, the four points Ambros Martin’s team earned in the group matches against the Macedonian champion may turn out to be of critical importance further on in the tournament.  The Hungarian club has a chance to collect two more significant points for the next stage if they can win in Denmark against FC Midtjylland, next Sunday.  Vardar ‘s next encounter with Hypo Niederösterreich will have no impact.

Good game occupying the left wing again, now that Anita Goerbicz is back.  One of the key players of the Hungarian club. If she does well, so does Gyor.  Perfect score: 3/3

Solid performance in central defense.  Got better on both ends of the court as the game progressed.   Best moments in offense during the early goings of H2 when she helped extending Gyor’s lead to four goals.

Couldn’t get the “starting backcourt” working properly; continued in right-back position for most of the second half. Improved defensive play in H2.  Scored her one and only goal in a clutch moment (55th minute).  A versatile player – very much in demand vs. Vardar.

Did not start well into the match; collecting her first 2-minute penalty after 30 seconds.  Had her hands full defending against two of the best left-backs in Europe (A. Penezic and S. Damnjanovic).   Irreplaceable on the offensive end; missed a few open shots but scored the match-winning goal with 2 seconds on the clock.

Somehow didn’t get involved in the game.  Scored on a 7-meter penalty and had a great assist to Loke, early on. Her game ended after 20 minutes.

Unassuming but effective.  Converted all her shots (3/3) while playing sound defense.

Earlier in the week she was announced as one of Norway’s two national goalkeepers for the World Cup’15 in Denmark, instead of longtime rival and goalkeeping legend Katrine Lunde.  The confidence booster did not do much for her game against Vardar.  Eva Kiss took over in H1 already and was a better help in bringing home the “W” – today.

Once on the field, she changed the direction of the game almost single handedly, late in H1 and in the early minutes of H2.  Impressive performance, led all scorers and set up the isolation play for Loke’s final shot – a classic.  Exceptional!

Strong defense throughout the game; reducing Linn Jorum Sulland’s impact close to nil.  Best period during the middle of the second half when she interrupted a 7:0 Gyor run with two consecutive goals.  One of the best Vardar players today.

Scored on three of the (only) five shots she took.  Vardar’s top scorer was not a factor on the offensive end – for the most part.  Much better performance defensively but her “spike” against Tumori translated into a red card, with seconds on the clock.  The rest is history.  There will be better days ahead.

Very strong first half when everything worked out including scoring twice.  Struggled in H2; often operating too close to Gyor’s defensive formation, making it easy for Amorim + Co. to interrupt whatever play she had in mind.  Tiredless fighter.

Robust game of the German line-player.  Her defensive skills are well known but today she also showed a solid game on the other end of the court.  Was replaced by Andrea Covic in what turned out to be Vardar’s final offensive play – why?

Showed a powerful performance during the first thirty minutes.  Played as the “extra-woman” during penalty periods for her team.  But Vardar’s all-rounder could not make the difference in the second period. Still one of the better players.

Deep into the final minute of the match, her “soft-handed” lob tied the game; the last highlight of a commanding presentation of the right-winger from Montenegro.  It was almost enough to secure a valuable point for the Main Round of the tournament – almost.

Started vigorously and was replaced in the early part of the second half by Amandine Leynaud without returning to the floor.  Considering the achievements of Leynaud it begs the question – why not?