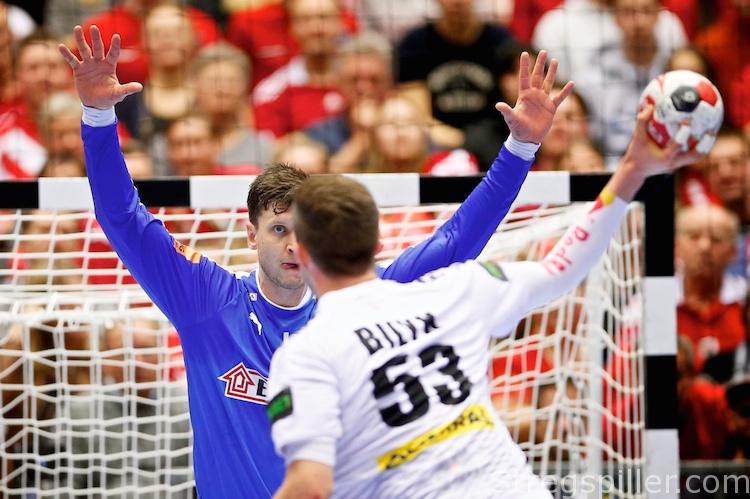 Finally! The match everyone in Herning has been waiting for ever since the start of the World Championship has finally arrived.

The Scandinavian showdown between hosts Denmark and their northern neighbours Norway takes place in Boxen Arena, on Thursday, at 20:15 hrs local time.

This match will not only decide first place in Group C, but also which of the two Scandinavian handball giants get the best starting position for the main round and with it the best prospects of reaching the semi-finals.

Chris O’Reilly and Peter Bruun take a look at how the teams stand before the clash in the Jutland moors.

DEN: Niklas Landin is one of the absolute best goalkeepers in the world and has posted ridiculously good statistics thus far. The Danish problem is that the second choice Jannick Green is usually too far below Landin’s level.

NOR: The two Norwegian shot-stoppers, Torbjørn Bergerud and Espen Christernsen are closer to each other’s level than the Danes, but one will need to have the game of his life to match Landin. Both capable of huge days, but have also failed to deliver on big occasions such as EHF EURO 2018.

DEN: There is only one Mikkel Hansen in the world, and he is Danish. He can have his bad days as he had against Austria, but those are rare, and they do not come two in a row. Furthermore, Denmark have one of the world´s best playmakers in Rasmus Lauge who is in the form of his life, while Mads Mensah is one the best substitutes for the backcourt line in the tournament. The Danish Achilles tendon in the backcourt line is the right back, where Nikolaj Øris is the only left-handed option. The Bjerringbro-Silkeborg player has performed extremely well so far in the competition, though.

NOR: Norway have Sander Sagosen who is also a backcourt player of absolute world class and controls a match better than Hansen, but he does not quite have his level of consistent brilliance yet. The other right-handed backcourt players in the Norwegian roster do not quite meet the level of their Danish adversaries, but all of them can do a job and work beautifully with Sagosen. Norway have an advantage on the right back with no fewer than three options with Eivind Tangen, Magnus Rød and Harald Reinkind. All three have various strengths to offer and could even up the back court duel.

DEN: We have known for a long time what René Toft Hansen stands for, and the Danes can consider themselves lucky that he seems to be free of injury and in great form. Alternatives Anders Zachariassen and Simon Hald, in particular, are improving all the time.

NOR: No line player in the competition reaches the level of Bjarte Myrhol, the man is a machine and has a 95% scoring rate so far. With brilliant substitutes like Magnus Gullerud and Henrik Jakobsen, the Norwegians are well equipped in this position.

DEN: If Casper Mortensen does not return from his knee injury, Denmark have a problem on the left wing. Young Magnus Landin has done a splendid job in the position, but with Mortensen still sidelined, this will Landin’s third consecutive 60-minute game. Can he still manage? On the opposite wing, Denmark have one of the best right wings in the world in Lasse Svan and Johan Hansen is a bright prospect as Svan’s backup.

NOR: In Magnus Jøndal and young Alexander Blonz, the Norwegians have a strong and interesting left wing duo. Kristian Bjørnsen may be a bit below Lasse Svan on the right wing, but he has not been far below the Dane in this competition, and he has a fine substitute in young Kevin Gulliksen. The problem for Norway is both wings underperformed on the big occasions at last year’s EURO, it has been a smooth ride so far, but can they find a way past Niklas Landin?

DEN: The center block causes concern for the Danes. René Toft is doing fine when he is on the court, but Henrik Møllgaard next to him has not quite lived up to his standards. The replacements, Simon Hald and Anders Zachariassen have not been all that reliable either. The Danes are missing Henrik Toft Hansen. It has to be said, though, that there was an obvious improvement in the most recent match against Austria.

NOR: The Norwegians have a reliable defense around experienced Bjarte Myrhol and the battling Christian O’Sullivan. Unlike Denmark, they also have the advantage in their biggest star, Sander Sagosen, being an asset in defense as well. The flexible Norwegian 6-0 formation is rarely exposed in one particular area.

DEN: With Nikolaj Jacobsen, Denmark have one of the best coaches in the world and the coach the nation was dreaming of for years. He is tactically clever, communicative, and his players are never in doubt about his ideas and opinions. He is emotional and temperamental too, but not beyond his own control, and those qualities have come in handy at times when he has found it necessary to wake up his players.

NOR: Christian Berge has many of Jacobsen’s qualities. His tactical skills are also at a very high level, and he is good at talking to his players. Berge has also managed the squad brilliantly, with only three players playing over two hours on court (compared to six Danes), which is keeping his squad both fresh and prepared for action at any time.

Advantage Norway – but we did not taken the crowd in Boxen into consideration, yet!