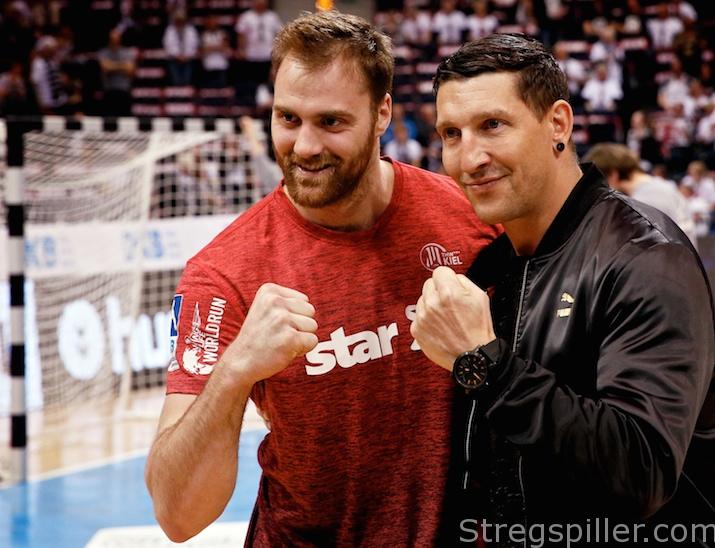 The new season of the DKB Handball-Bundesliga is set to start with two games tonight, while most of the other teams will follow up on Sunday.  To be honest, I don’t know if I have ever been this excited before the kick-off of a new campaign.  There are many reasons to look forward to the more than 300 matches.  For example, the new television deal the league struck with Sky (and public TV stations ARD/ZDF), makes sure that all games will be broadcasted live for the first time in the history of German handball.

The matches will be followed by a “Handball Talk”, hosted by Stefan Kretzschmar, the well-known former German left-wing, one of the best players of his generation and surely one of the most outspoken individuals around.  To be honest, I don’t know if the task as moderator will suit him well, as I think his qualities as expert analyst will be somewhat squandered in this new role.  But it’s worth a try and it will be very interesting to watch.  The show will air on Sky’s free-TV 24/7 news channel, in addition to a magazine summarizing the highlights of the round every Sunday evening.

Apart from extensive media coverage, the new season is all about the teams and players.  Some question marks come to mind when considering the usual title contenders.

Kiel didn’t win the domestic championship for two years in a row and often struggled – surprising given their high-quality roster.  The reigning champions, Rhein-Neckar Löwen, lost a key-player in Kim Ekdahl du Rietz and it remains to be seen if he has been adequately replaced.  And SG Flensburg-Handewitt will have to do without their mastermind, head coach Ljubomir Vranjes, going forward.

These developments have opened the door for other clubs such as Füchse Berlin, for example, to crack the Top 3.  They are featuring almost half-dozen German internationals, including goalkeeper Silvio Heinevetter and right-back Fabian Wiede.  They also added “size” with Erik Schmidt and Marko Kopljar joining Berlin over the summer.  From the outset, it seems they could be just fit enough to make a serious run at first place.  The team is that good, at least if you ask me.

SC Magdeburg is another club poised to move up, and if “Breathless” Michael Damgaard is able to find his form, who would seriously bet against a team that didn’t lose in 22 matches at some point during last season?  I certainly wouldn’t.

Still, there are some squads in the middle of the pack that are capable of surprising any of the favorites. Göppingen, Wetzlar, Leipzig, Erlangen and Hannover are definitely above average and can beat any other club on home court, on any given day.  Hannover made a stunning move replacing former head coach Jens Bürkle with Carlos Ortega – Iker Romero will assist him, as he knows the league from his active days as a player in Berlin.

By the way, Hannover was even on points with Magdeburg right after Christmas 2016 before not winning a single game in the following six months.  That’s how closely matched teams are in the wold’s best league.

I still recall people saying, “It’s boring, because Kiel is winning all the time”.  No, they are not.  Not anymore.  And that makes it extremely interesting.

Small-budget clubs like Ludwigshafen and Hüttenberg aside – latter team is not even allowed to use their very own arena – the race towards relegation is wide open.

Clubs like Lemgo, Stuttgart, Minden, Lübbecke and Gummersbach will all have to fight hard to avoid any sort of negative surprise.  In case Ludwigshafen and/or Hüttenberg play above potential – it can always happen – the season of the aforementioned five squads might end up in disaster.  Games between these clubs will be fun to watch, as every single match will be of great importance.