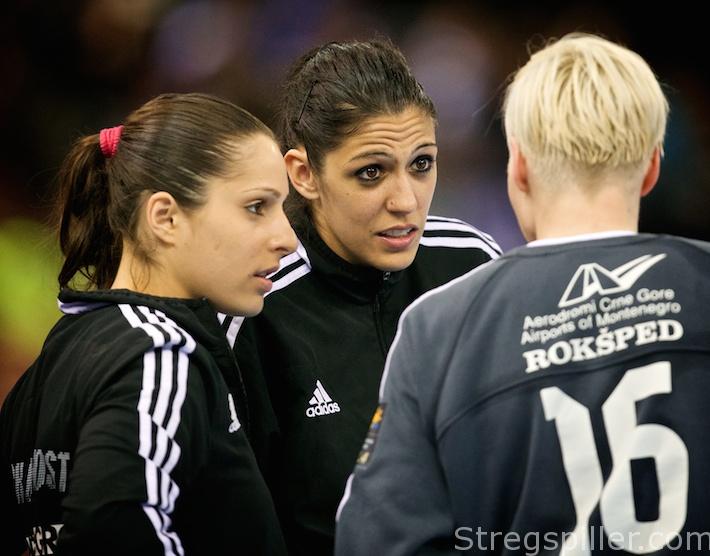 Match of the Week – Champions League (W)  Round 4

It was loud but not sold out at Moraca Hall when Buducnost’s players entered the court to the tune of Tina Turner’s “Simply the Best”.  3,500 spectators had gathered in anticipation of an encore performance of the hosting team after their impressive win in Romania’s capital seven days earlier.  While Buducnost coach Dragan Adzic had a complete team at his disposal, his colleague Kim Rasmussen did not register Brazilian right-back Deonise Fachinello on the match report.

This time it would be different – and Bucuresti’s playmaker “Bella” Gullden together with left-wing Franca da Silva would make sure of it.  Both players had an outstanding performance during the initial 30 minutes of play as both teams were trading goals without gaining a meaningful advantage over each other.  Buducnost was playing catch-up for most of the time while the two goalkeepers (Zderic (Buducnost) / Pessoa (Bucuresti) were unable to make a difference.  With seconds to play, a fantastic “rocket” by Aurelia Bradeanu from the 10-meter mark – somehow the goal did not make it to the EHF’s “Top 5 Goals of Round 4” – provided coach Rasmussen’s team with the slight advantage going into the locker room with a 13:12 lead.

While Gullden and da Silva were dominating the first half of the encounter between the two handball “heavy-weights”, the second period belonged to the two right-backs, Katarina Bulatovic (Buducnost) and Danish international Line Jorgensen (Bucuresti).  Especially, Jorgensen fought tirelessly on both ends of the court, trying to keep her squad ahead.  Yet, it did not quite work according to plan for Bucuresti.  One of Dragan Adzic’s adjustments had much to do with it.  Once Suzana Lazovic entered the field, Buducnost’s defensive formation tightened up significantly, causing a 14 minute Bucuresti scoring drought – it felt like an eternity.  Unfortunately – taken Buducnost’s perspective – Milena Raicevic & Co. were not able to push the Romanian top club over edge throughout this period.  Christina Neagu missed a couple of penalties, while the two wing-players Majda Mehmedovic and Radmilla Petrovic could not convert several open shots mid-way through the second half.  Uncharacteristically, the team from Montenegro was unable to score even when having a woman extra on the pitch.  Coach Rasmussen’s move to exchange Brazil’s national goalkeeper Mayssa Pessoa for Jelena Grubisic paid dividends – big time.  Grubisic was instrumental that the reigning Champions League winner was not able to catch up until the 55th minute when Katarina Bulatovic scored her 8th and final goal of the match.  What followed was a dramatic finale to a second period that at times was slowed down to a snails’ pace.  Apparently, coach Rasmussen had called for a final time-out just before Isabelle Gullden’s offensive foul against Suzana Lazovic, in the dying moments of the match.  After some commotion around the time-keepers table, the two Russian referees decided pro Bucuresti.  Dragana Cvijic’s goal that would have handed the lead – and possibly victory – to Buducnost was annulled.

Bucuresti’s Kim Rasmussen.  The Danish skipper made successful adjustments on both ends of the field after the loss at home against coach Adzic’s team.  His second-half move to replace goalkeeper Pessoa with Jelena Grubisic paid-off particularly well and so did his “last second” time-out.  On Sunday, he and his team demonstrated what it takes to push Buducnost against the ropes.  Isabelle Gullden et. al. had tied the score going into the final minutes of the match, despite a painfully long period when Bucuresti could not get the ball past Marta Zderic.  Rasmussen’s team has passed the “acid test” at Moraca Hall and only now should be considered a real and serious contender for the FINAL4 in Budapest.

Djurdjina Jaukovic (Buducnost) – a flawless performance during her short time on the floor when replacing Christian Neagu during the intense moments towards the end of the game.  She showed no nerves when scoring on a powerful jump-shot, tying the match at 21:21, while vigorously defending.  Fans across Europe can look forward to see more of her.

Not her best game on the offensive end; missed several open shots in the second half that could have turned the match; strong defensively

Strong during the first 30 minutes but her confidence faded considerably after missing on two penalty shots during H2 of the game.

Serbia’s answer to Didier Dinart (France).  A human bulwark on the defensive end.  This Sunday it was not different – robust defense, paired with a powerful presence on the other side of the pitch.  Almost decided the match in its dying moments.

If LeBron James is called “King”, Bulatovic may well qualify for the title of “Katarina the Great”.  Another superb performance and a constant threat while scoring from anywhere on the pitch. Kept Buducnost in the game when nobody else did.

Good start to both halfs of the match.  Missed on a number of open shots, including one from the 7-meter mark.  Had problems dealing with da Silva during the opening period.  She wash’t her usual self.

Had a tough time during the first half of the game getting her hands on the ball (H1 save rate stood at 23%).  When Buducnost’s defense tightened up in the second period, so did her rate of saves.

Outstanding first half shooting 4/4.  Not as effective when Buducnost turned on “defensive screws” during the second period.

Took a beating but scored the final goal of Bucuresti from an unlikely angle while being tackled hard.  Significant challenges when playing defense; Katarina Bulatovic was no match for her.  Fouled-out during the closing moments of the game.

The MVP of EURO 2014 showed why the title was awarded to her and rightfully so.  Unstoppable in the first 30 minutes of the match while scoring six of her seven goals.  In the second half she slowed down the pace when Bucuresti needed it most; especially when Rodrigues was sitting-out her 2-minute penalties.  One of her very best Champions League performances to date.

Together with Gullden and Grubisic, Bucuresti’s key player of the match.  Scored all her five goals in H2 and was the sole remaining back-court danger.  Much more focused on the defensive end as well compared to a week ago.  Relentless fighter – impressive.

Her battles with Dragana Cvijic fighting for position on the line provided some of the highlights for any defense-minded handball afficionado.  Had less scoring opportunities when compared to the previous game; converted on her one shot on goal.

Scored two timely goals; fought as hard as her teammates but Buducnost’s physical defense was not her cup of tea.  Solid performance.

The 20% save rate at the end of the initial period was in line with her performance a week earlier – unfortunately.  It wasn’t her day.  Was replaced by Jelena Grubisic at half-time.  It turned out to be coach Rasmussen’s most critical switch of the game.

Hopefully, a re-match between the two teams at the FINAL4 in Budapest 2016.  Drama and excitement seems to be all but assured.

You’re simply the best, better than all the rest

Better than anyone, anyone I’ve ever met

Tear us apart, baby, I would rather be dead