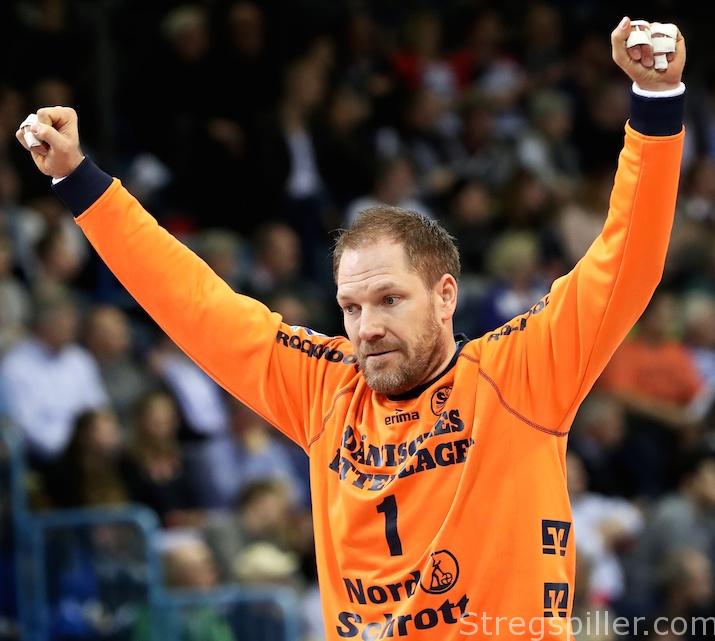 ”Small things can decide the destiny of a team”

INTERVIEW – The fact that matches in the last round of the Champions League group phase are not played at the same time is unfair, as it gives some teams an advantage and others not, finds Flensburg goalkeeper Mattias Andersson in this exclusive interview with stregspiller.com.

He also explains why Flensburg is the best of all places for him to end his career.

It would be unthinkable that games in the last round in the football Champions League would not be played at the same time.  In this competition, 20:45 hrs. CET is standard kickoff time for all matches.

In handball it’s different, and it is not okay, if you ask Mattias Andersson.

“All matches in the last round should be played at the same time.

“As it is now, the games are scattered around the last weekend and some events even occur before.

“This gives some teams an advantage and others a disadvantage, as some clubs already know the result of their rival, simply because they play later,” finds the experienced goalkeeper from SG Flensburg-Handewitt.

His own team is not likely to face this problem this season, though.

Flensburg will meet Veszprém on the road, on Saturday evening in what appears to be a direct duel for third place in Group A.  Flensburg are virtually assured of finishing fourth, assuming a victory in their home game against Schaffhausen, on Wednesday.

Some of the pundits think that finishing third or fourth is not that big of  a deal, and they are probably right if you look at the expected  round of Last 16.

The way things look right now, Flensburg will meet Celje if they finish third and Meshkov Brest if they end up fourth, and in both cases, Flensburg will play the second leg at home.

“I am not sure if it would be a particular advantage to meet one or the other of these two teams, but finishing at home is crucial, of course.

“We saw it in our quarter-final last year against Kielce, when we were probably sent out because we played the second leg away,” says Mattias Andersson, recalling the thrilling quarter-finals between Flensburg and Kielce of last season, where the first game ended 28:28, and Kielce winning the return match 29:28 after a controversial finish.

Many observers – not only Flensburg fans – found that Andersson & Co. were denied a clear penalty in the last seconds of this dramatic encounter.

“You are not going to hear me claiming that we were robbed of a penalty.

“I will leave it to others, but this shows how small things can decide the destiny of a team,” says Mattias Andersson.

A third Champions League title would be a dream

Lately, Mattias has done his part bringing Flensburg in a favorable position ahead of the knockout stage.

In the home game against Bjerringbro-Silkeborg last Saturday, he prevented his team from losing, unlike Flensburg’s archrival, THW Kiel, one week earlier against the same opponent.

Andersson was sent on, as the visitors were leading 17:14 early in the second half.  Some spectacular saves contributed in a decisive way to Flensburg turning the game around and winning 26:24.

“I am not sure if I was the one who changed the game.

“It was probably more a question of all of us stepping up and better focusing.

“Anyway, It was a difficult match against a clever and well organized squad.  But fortunately, we were the better team at the end of the day.”

He has won the Champions League twice already – with Kiel in 2007 and Flensburg in 2014.

Despite a tough quarter-final that may be awaiting Flensburg, provided they overcome the round of Last 16, he allows himself dreaming about a third title.

“Of course, it was a fantastic experience in 2014, when no one expected anything from us, and of course, it is a dream I have.

“However, very little things can decide how far you get.

“Once again, you only need to think of our quarter-finals last year to reassure yourself,” he says.

We have good focus

His collection of German championships is somewhat larger than the one of his Champions League trophies.

He won the Bundesliga five times, all of the titles with Kiel.

However, taking the trophy with Flensburg once before ending his career is a strong wish of the veteran.

So far, Flensburg succeeded in winning the German championship only once, in 2004.

This year, chances for a second triumph look promising.  With 12 matches left to play, Flensburg are on top of the Bundesliga, five points ahead of Kiel.

But, third-placed Rhein-Neckar Löwen have played two matches less and they can reduce the gap to two points, assuming two victories.

The fact that Flensburg are leading the Bundesliga pack is a bit of a surprise considering that key players such as Johan Jakobsson and Tobias Karlsson have been out injured for several weeks, now.

“We have simply been good at focusing on the tasks in front of us, and furthermore, we have been good at sticking together.

“We have appeared very much as a close unit this season, and this is probably the reason why we have been able to compensate the loss of a couple of key players.

“Of course, winning the championship with Flensburg is another big dream for me, but it still is a long way to go.  It is too early to have too much of an expectation,” explains Mattias Andersson.

I miss the national team

This winter, he quit the Swedish national team, the very squad he won a European champion with and two Olympic silver medals.

“It is really too early to say if I got more energy for my club career by quitting the national team, but I felt that being able to rest during the World Championship helped me a lot.

“There is no doubt that I miss the national team, when they play the major championships, but I did have my time there and some great moments.

“I am turning 39 later this month, so I found it was about time to step aside and leave the position to some younger forces,” he says.

Instead, he is focusing on his career in Flensburg, where he recently extended his contract for another year until the summer of 2018, before calling an end to his outstanding career.

“Next season will be my last.

“I have said it several times, and I am sticking to it.

“I am going to turn 40 before next season is over.  So it will be about time to call it quits,” says Mattias Andersson who will be part of a somewhat different Flensburg team in his final season.

Already several months ago, the club announced that the squad will have to be reduced from the current roster of 18 players to 15, next season.

Experienced athletes like Johan Jakobsson and Anders Eggert will be leaving and younger ones, such as Norwegian right-back Magnus Abelvik Rød, and Swedish left-back Simon Jepsson, will be joining the club.

On top of all, head coach Ljubomiv Vranjes has decided to take on double duties, as coach of Veszprém and  the Hungarian national team.

Flensburg were hoping to sign Norway’s national coach, Christian Berge, but the former Flensburg playmaker said “thanks but no thanks” after careful consideration.

“Of course, it is a peculiar situation with all the changes in the squad and the fact that we still do not know who will be our coach next season.

“However, I am sure the club will find a satisfying solution for the coaching position.  And with regards to the new additions, it will be up to us experienced players to take on some extra responsibility, making things work.

“Anyway, I am sure we will have a strong and well-functioning team – also in the future,” says Mattias Andersson.

Flensburg is special for me

When he ends his long career next summer, he will have spent seven years in Flensburg.  Just as long as he played in Kiel.  During his exceptional career, FC Barcelona and TV Grosswallstadt also benefited from his skills between the goalposts.

However, it is no coincidence that Flensburg is the club that he has chosen to end it all.

“Flensburg is special for me, because of the club’s spirit.

“People are there for each other, and it is easy to feel at home.

“That is why it is a good place for me to play my last year here,” says Mattias Andersson.