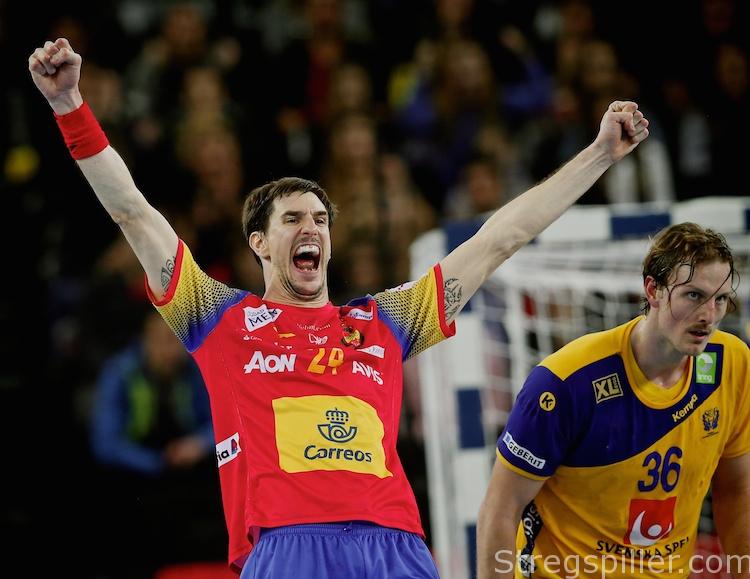 In their fifth final at a European championship, Spain finally managed to lift the trophy.  After an impressive second half, coach Ribera’s men sealed the triumph against the four times European champions from Sweden.

None of the two teams arrived at the final weekend undefeated.

Spain had suffered two losses along the way, while Sweden got beaten no less than three times before the final weekend in Zagreb Arena.

For Sweden, it was their fifth final at a European championship, and their first since 2002.

All of Sweden´s previous EURO finals ended with victories and one of them in Zagreb. Led by Ljubomir Vranjes as the brilliant playmaker, Sweden defeated Russia 32:31 after extra time, back in 2000.

To Spain, it was the fifth attempt as well, to succeed in the European final, but unlike the Scandinavians, they had never won the title.

In their most recent try, they lost by as much as 24:17 against Germany, in Poland, two years ago.

Pundits had the tendency to talk Spain down before the tournament.

But on the last day of the competition, a strong Spanish team demonstrated that this was simply unjustified. Spain broke the curse, and recorded a clear 29:23 victory against Sweden.

By 12th minute, Hampus Wanne had provided for Sweden’s first of several three-goal leads, when he made it 7:4.

Spain reacted, adjusting their defense to a 5-1 formation and sometimes 3-2-1, but Sweden continued to find ways producing good scoring opportunities. On the other end of the pitch, Spain had ongoing troubles to get the ball past Appelgren in goal.

Appelgren, who’s performance throughout the tournament was not good enough for a nomination to the EHF’s All Star Team, reached a saving percentage of 48 in the first half.

He was the most important factor, why Sweden stayed three goals ahead for most of the time in the first half.

Everything changed from the start of the second half.

It took Spain less than two minutes to draw even and a good minute later they led the game for the first time since 3:2.

Unlike in the first half, Spain’s defense efforts began to pay off, while Arpad Sterbik, who had replaced Rodrigo Corrales in goal, stepped up.

As a result, Sweden scored only two goals in the first 20 minutes of the second half. Turnovers and missed shots led to a barrage of Spanish counter attacks.

Both of Spain’s wing players, Ferran Sole and Aitor Arino, benefitted a great deal and following a “hat-trick” from Sole, a 13:14 deficit turned into a 16:14 lead.

By minute 50, Spain had outscored Sweden 11:2 and the match was effectively decided, while the celebrations of Entrerrios & Co. began way before the final whistle.

Brought in as a substitute only hours before the semifinal, Sterbik had a decisive influence on the final outcome.

After 23 minutes, he replaced Corrales in goal, and almost immediately the 38-year-old keeper from Vardar Skopje keeper made some spectacular and timely saves. It almost seemed as if his mere presence made Sweden’s players think twice before taking a shot on goal.

Spain can celebrate a deserved first gold medal at a European championship after four lost finals. In addition, they directly qualified for the next World Championship in Germany and Denmark in 2019.

Sweden, who lost half of their matches in the tournament, settled for silver in their first European championship final in 16 years.