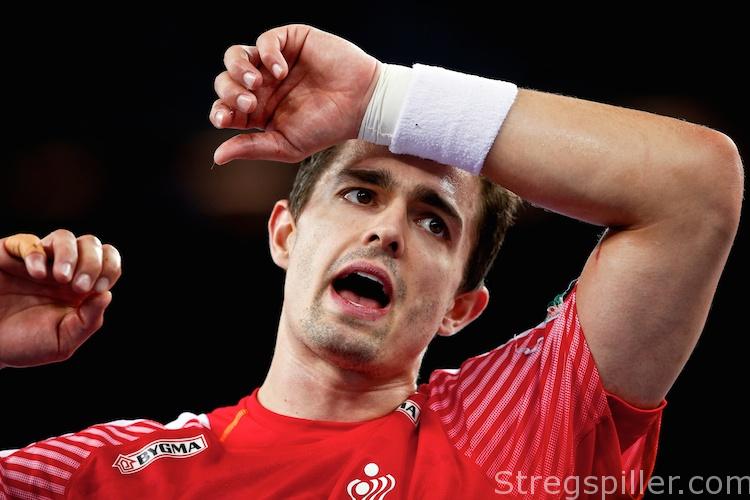 The semifinals at the 2018 European championship turned into a day of surprises.

First, Spain got the better end of France, winning decisively and in the last match of the night, Sweden defeated their Danish neighbors in a thrilling match, where the Danes forced extra time.

The return of Arpad Sterbik was the talk of the day.

The 38-year-old world-class goalkeeper from Vardar had replaced the injured Gonzalo Perez de Vargas – a change that looked more like a reinforcement of the team.

The match itself was yet another edition of one of the most class encounters in men´s handball over the past couple of decades. This time France assumed the role of favorite despite of Sterbik´s.

It was impossible to not be impressed by coach Dinart´s achievement, operating with a squad handicapped by injury; the French had entered the semi-final with six straight wins.

Spain were inconsistent in their 2018 EURO campaign, still they finished the main round group with a convincing performance against Germany (31:27), despite having played back-to-back games.

Spain took the pace out and dictated the rhythm of the game; once France found their bearings, it was too late.

Arpad Sterbik did not start in Spain’s goal, but he still made an impact in the first half.  In the 21st minute, he entered the pitch for a penalty – a shot he saved from Kentin Mahé.

Four minutes later, he repeated the effort against Michaël Guigou and only in the third attempt from the spot did Daniel Cuacheteux succeed, beating the veteran.

The three “old boys” in the backcourt, played a crucial part in Spain´s surprising dominance.

Eduardo Gurbindo (right back), Dani Samiento (center back) and Raul Entrerrios (left back} did just great against a very physical French defense formation, that failed to impress the three veterans.

And when Samiento needed a break, there still was Joan Canellas who took over in style as playmaker.

Speed was what France needed to change the course of the game.

However, the second half started the same way as the first 30 minutes – by Spain continued to slow down the match.

Finally, when France added pace, it looked like they could turn the tables.

At 23:14 (14th minute) it appeared that Spain had decided the matter already, but six French goals in a row, not only created some suspense but also threw the outcome of the encounter in question.

However, France did not get any closer than three goals and the Spaniards managed to ride the storm.

Entrerrios sealed the deal at 25:21 with two and a half minute left on the clock.

Of the four semifinalists, Spain has been the only nation who never became European champion.

Now, the proud handball nation has an excellent chance to change handball history, when they meet Sweden in the final, on Sunday. It will Spain´s second European final in a row.

France and Denmark will have to dig deep and try to find motivation before playing for the bronze medal.

Sweden, after having lost half of their games en route to the semifinal, were severely handicapped before this Scandinavian derby.

First, their highest scoring player (right back Albin Lagergren) was ruled out with a concussion. A difficult situation for the Swedes who had already lost their other right back Johan Jakobsson because of an injury in their last main round match.

And only a few hours before the match against Denmark, Sweden’s second highest scoring player, the young left back, Simon Jeppsson, was listed as unable to play because of a throat infection.

Andreas Cederholm was called up to replace Lagergren, while it was obviously too late to find a substitute for Jeppsson.

The Danes had to worry about their first-choice goalkeeper, Niklas Landin, who was ready to depart, as his wife was about to give berth.

Flensburg’s keeper Kevin Møller would replace him, but much to the relief of the Danes, Landin was ready to play.

After the unexpected outcome of the first semifinal, we got an even bigger surprise, as a depleted Swedish team won a thriller against their Scandinavian neighbors.

Goalkeeper Andreas Palicka became the hero for Sweden, against a Danish team that forced the game into extra time, after trailing all the way. Eventually, Sweden got the job done.

Injuries and illness forced Sweden´s coach, Kristján Andresson, to find alternative solutions in his starting lineup. The usual right wing, Mattias Zachrisson, played as right back, while Viktor Östlund, from Danish TTH Holstebro, had his debut EURO 2018 on the opposite back.

Denmark´s coach Nikolaj Jacobsen went back to starting with Morten Olsen on the right back position.

From the beginning, it was hard to see that Sweden were missing their two best goal scorers.

In the first 21 minutes they had absolutely no trouble getting the ball past Niklas Landin, who could not get his hand on the ball (1 save in the first half).

Eventually, Landin was replaced by Jannick Green who performed a couple of saves, before fading behind a Danish defense formation that was almost non-existing.

At the same time, Sweden’s defense did not have much trouble with a Danish squad that too many times picked the wrong decisions, making Palicka’s goalkeeping job easy.

Sweden went up by five goals (16:11), and coach Jacobsen had to spend to timeouts before the 40th minute.

Only after changing to a 5-1 formation (in defense), and playing seven-against-six on the other end of the court, did his team perform better.

In fact, the Danes kept their opponents from scoring in the last nine minutes of the first half. But, Denmark’s attack still had to work extremely hard for their own goals, and Sweden were leading by two at half time.

Andreas Palicka in goal, continued where he left off before the break, saving the next six Danish shots, while his teammates re-established their five-goal advantage on the other end of the court.

It almost took eight minutes, before Mikkel Hansen scored Denmark´s first goal in the second half.

Denmark managed to get back to a two-goal deficit, but could not do much better, until Hansen brought about the equalizer (54th minute).

But after Gottfridsson’s score (28:25) with two minutes left on the clock, it looked and felt like a decision. Then came a crazy finish.

First, Rasmus Lauge reduced to 26:28 and Lasse Svan followed through, making it 27:28. Sweden handled the ball for the last 30 seconds and Denmark looked like a sure looser. But an ill-advised shot from left wing landed in the hands of Mikkel Hansen and Svan converted a superb pass from Denmark’s star player – 28:28.

A breath-taking Danish finish turned out worth nothing.

After trading goals throughout extra time, it was Jim Gottfridsson, who gave his team another two-goal lead at 35:33 with 25 seconds to go – finally it was over.

The record European champions, Sweden, have made it to another final again and now have two days to prepare for the clash with Spain.

The Danes will compete for the bronze medal, in yet another classic battle against France.

Before the semifinals, Croatia defeated the Czech Republic 28:27 in the match for fifth place.