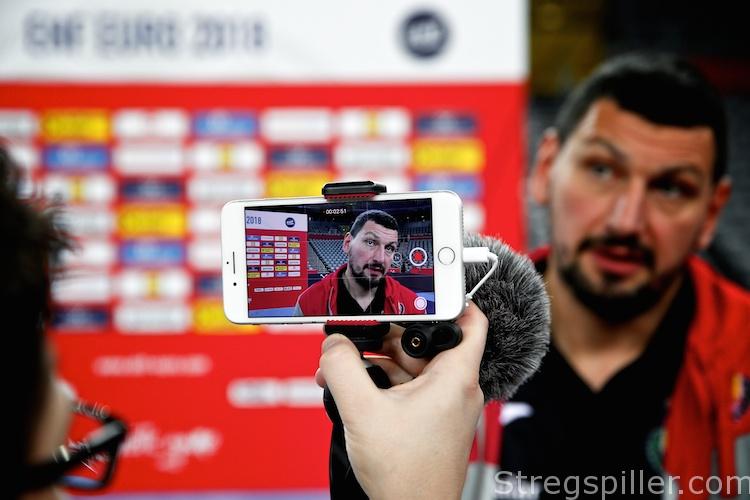 FEATURE – … on at least one thing ahead of the final at the 2018 European championship, on Sunday night:

Talking to the players from Spain and Sweden the day before the final of the 2018 European championship, in Zagreb, you come to realize that players from both sides agree that defense and goalkeeping will make the difference in the last match of the tournament.

Julen Aguinagalde and Joan Canellas from Spain as well as Sweden’s Jesper Nielsen and Mattias Zachrisson are all pointing at defense and goalkeeping when asked about naming their success factors, ahead of the final clash at Zagreb Arena.

“We are, of course, happy to be in the final again, but we also realize that Sweden will be a tough task, not the least because of their defense formation and goalkeepers.

“The two Swedish goalkeepers, Appelgren and Palicka, have played a particularly good tournament, but of course, we have a dream to beat them,” says Spain´s line player, Julen Aguinagalde, who is looking forward to his battle with the Swedish defenders.

“I know they are very strong in the defense, and I am aware that it will be difficult for all our players, not only for us line players. But, I think I know a trick or two to get the necessary space.

“Spain have never been European champions before, as you know, and we really hope to make it this time,” Julen Aguinagalde tells stregspiller.com.

“I know the goalkeepers all too well”

Playmaker Joan Canellas finds that he and his teammates can take plenty of self-confidence with them after their 27:23 win against France in the semi-final.

“I certainly feel that this victory emphasized that we deserve to be in the final.

“When you have beaten the possibly best team in the world, you definitely deserve to play the final.

“Everything in our team worked fine, but our defense did very well.

“It was only natural that a team such as France would come a bit closer towards the end (of the match ed.), but we were able to resist.

“I see the game between Sweden and us as a match with 50% chance for either side. It is a final that no one was really expecting.

The way I see it, both teams can play without pressure, as they have been performing better than most people expected.

“I only hope that their two goalkeepers “Palle” (Andreas Palicka, ed.) and Appelgren do not have a day like on Friday against Denmark.

“From the Champions League, I know both of them all too well. My team – Vardar – are in the same group as Rhein-Neckar Löwen and I am not surprised to see how important they have become for Sweden’s success in this tournament.

“Of course, it is difficult to win a game against a goalkeeping duo that’s saving around 40%, but hopefully we’ll find a way to cope with it.

“Obviously, we will need to be very concentrated when taking our shots and pursue the right opportunities,” says the 31-year-old playmaker.

Strong moral will help us

Sweden”s line player and central defender, Jesper Nielsen, finds that he and his teammates can benefit from the moral the team showed in extra time of the semifinal against Denmark.

“The finish of this match was really tough and the Danes certainly had some momentum going into extra time, but we dealt with it.

“I think it was very important for us, scoring the first goal in extra time, and we can take the confidence with us to the final,” says the 28-year-old player from Paris Saint-Germain, who will be continuing his career with Germany’s Rhein-Neckar Löwen, next season.

He is a bit in doubt, as Sweden spent some more physical resources in their semifinal compared to Spain´s game against France.

“I do not really know. We have all played many matches by now, but of course, we played some extra minutes on Friday, while Spain had the chance to rest a bit longer. But, I do not really think it will be that big of a problem,” expects Jesper Nielsen, who can look forward to some hard work at both ends of the court.

Not only does he play on the line when in attack, he also is a key defender – a player Sweden relies on heavily.

“I probably played around 68 minutes against Denmark, and after the match I was really tired, but I know that my role is to play at both ends of the court.

“The fact that, I am so badly needed in defense will inevitably harm my game when in offense, especially after seven matches,” says Jesper Nielsen who is convinced as well that defense and the goalkeeping will be decisive.

“Absolutely. We won our semifinal against Denmark because of our defense and goalkeepers. And that was also the reason why we defeated Croatia last week, so this will be our key to success.”

Playing right back is cool

Denmark was taken by surprise when Mattias Zachrisson performed on the right back position throughout the semifinal, on Friday night.

Actually, it is a position that he is quite familiar with.

“In the national team, I haven’t played the position much, but in my club, Füchse Berlin, I occupy the position frequently, so it is not entirely new to me. Obviously it’s great to play in this position in a match such as the one against Denmark,” says Zachrisson who scored seven goals in the semifinal.

“It looks as if I am going to play as right back again.

“Both of our usual right backs are injured and for them the European championship is over.

“That’s sad news for them, but I am happy to stand in, as I find it cool to play as right back every now and then.

You become more part of the game compared to playing on the wing.

“However, the match will be decided in defense and by goalkeeping.

“We have won all our matches in defense and our goalkeepers have done great throughout the tournament. And that’s the way it will have to be for 60 minutes tomorrow,” ends Mattias Zachrisson.