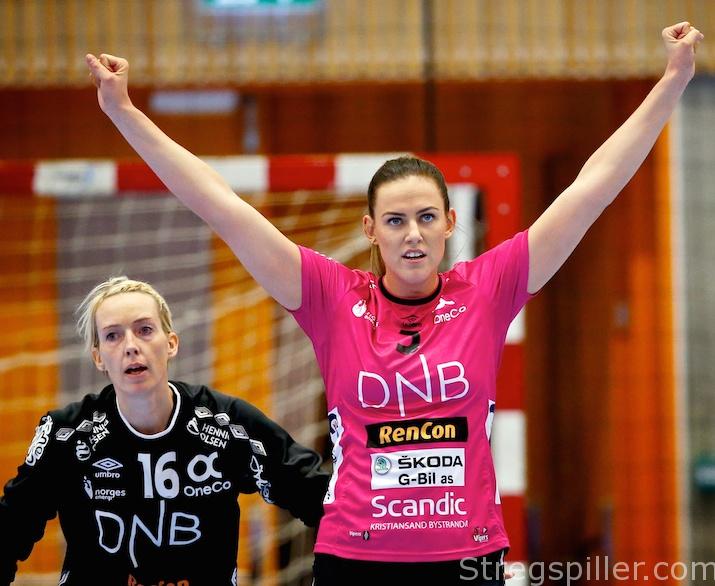 FC Midtjylland pulled off the only real surprise in the second round, while Vipers avenged a poor start with a great performance at home.

Vardar and FTC did the expected, while Györ had to work hard against Brest.

The only two undefeated teams of the first round met in Nordhausen as Vardar had opened their Champions League campaign with a 34:31 home victory against FTC, while Thüringer won 31:27, in Larvik.

However, Germany’s runners-up of last season quickly came to realize that there was some kind of a difference between winning in Larvik and trying to beat the 2017 Champions League finalist – at least when considering Thüringer´s present squad.

THC had Italian left back Anika Niederwieser back from injury, but they were still missing four players, with Anne Hubinger and Macarena Aguilar being the most prominent absentees.

Therefore, Thüringer had only 12 names on the team roster, and this was a major reason why they were not able to offer Vardar much more resistance.

If anyone had expected Thüringer pulling a surprise was corrected early.  Any such hope was put to bed between the 11th and the 18th minute, when Vardar went from 6:6 via 12:6 to a 14:8 lead.

The hosts managed to reduce the deficit to three goals after playing with two extra players on the court, but as soon as Vardar got back to full strength, a six-goal lead was re-established and even extended by two more before half time.

In the second half, Vardar took it a bit easier with regards to goal-scoring, as coach Garcia Parrondo used his bench a bit more, and Thüringer got some consolation by drawing the second half.

Györ had trashed FC Midtjylland 27:16 in the first round, while Brest lost 26:24 away to Rostov-Don. Still, the French team left Russia feeling good about their performance.

This weekend the club from the west of France made Györ work for their points as well, as both teams scored in waves.

Brest had their first run, when they changed a 2:6 deficit into a 7:6 lead – only to see Györ score the next six goals making it 12:7 in their favor.

The period before the break belonged to the home team again when Brest changed from 8:13 to 12:13.

Brest even caught up as Melinda Geiger made it 14:14 on a penalty shot with six and a half minutes into the second half.

But then Györ seemed to decide the matter with another scoring run, increasing their advantage from 18:17 to 21:17.

The Hungarians went up by as much as 25:20, but Brest hung in and created new excitement towards the end, as they reduced to 25:23, before Anita Göbricz closed the game (26:23).

Brest may still be without points, but they sure look like a team for the main round.

Surprise of the Week

Maybe we should stop calling it a surprise when Midtjylland defeats Rostov-Don as the Danes just repeated their achievement from last season, when they beat the Russian powerhouse 25:23.

But, let’s face it – defeating the ambitious and star-studded team from Southern Russia is still astounding, considering the quality of the squad.

Midtjylland stubbornly hung in and stayed with the Russian champion throughout the match. A justifiable red card for Rostov’s keeper Mayssa Pessoa after only 18 minutes helped as well.

Early on, Rostov controlled the game, leading 3:0, but then the home team got started. Increasingly, the visitors came under pressure as Midtjylland was backed by yet another brilliant performance of Sabine Englert, in the Danish goal.

At the beginning of the second half, Rostov took charge again, going up by three at 17:14 and 18:15. But impressive morale and tactical skill allowed Midtjylland back into the game and in the final minutes, the Danes appeared to be the quicker squad – mentally and physically.

It’s a pity that the match only attracted 1,682 spectators – it would have deserved a larger audience.

Putting a fantastic performance on display, 37-year-old Katrine Lunde played a very important part in Vipers´ resurrection after their poor debut against Metz, a week ago.

Lunde´s many saves contributed a great deal to Vipers´ clear 29:19 victory against Buducnost.

Vipers can definitely feel good about their prospects, having Lunde on their team.

Van der Heijden did not play a big part in FTC´s Champions League opener last weekend, when the Hungarian’s lost 34:31 away, to Vardar.

However, it all changed, this past weekend as FTC defeated Larvik 37:33 at home.

This time, the 27-year-old Dutch right back really got her chance and she grabbed it with both hands.  After scoring 10 goals, she did more than her duty securing FTC´s first win in the tournament in the 2017/18 season.

37 goals, was the largest amount of goals, the Norwegian champion ever conceded in a Champions League match.

The previous record wasn’t far back, though. On November 19th of last year, Krim Ljubljana scored 36, when they won 36:31 at Boligmappe Arena, in Larvik.

Vipers are back on track

After a pale performance and a 30:22 defeat in Metz, last weekend, Vipers resurrected themselves at Kristiansand’s Aquarama.

Buducnost, who opened their Champions League campaign with a surprisingly clear 32:24 home win against Bietigheim, were without a chance against the Norwegian Champions League debutants, who were leading by 12 goals a couple of times before settling the score at 29:19.

After losing 30:22 on the road against Buducnost, Bietigheim recorded another defeat, when they played their first Champions League match in front of a much anticipating home crowd.

In fact, Metz´s win at MHP Arena was much more decisive than the final score indicated.

Actually, the French visitors were leading by eight goals in the second half already, before Bietigheim put some cosmetics on the result.

Is this really the best the German champion can do?

Other Results of Round 2

In Group A, CSM Bucuresti are the outsized favorites against Nykøbing Falster despite playing away, while being on the road should not stop Krim from defeating Vistal Gdynia.

In Group B, Rostov-Don will have to rise after the letdown against Midtjylland, when they receive Györ for the biggest clash in round three.

An exciting match awaits in France where Brest Bretagne will face a team from FC Midtjylland that’s kicking and alive.

Last season, Vardar sent Larvik out of the quarter-finals, and this year it will be a sensation if the Macedonians will not return from Norway with a clear win, whereas, the Group C meeting between Thüringer HC and FTC appears to be more open.

In their third Champions League match Vipers will find themselves in the role of favorite, in their Group D fight against Bietigheim who have been a disappointment so far.

Metz enjoys home court advantage versus Buducnost and it should show, given the French clubs impressive performances so far in the 2017/18 Champions League campaign.