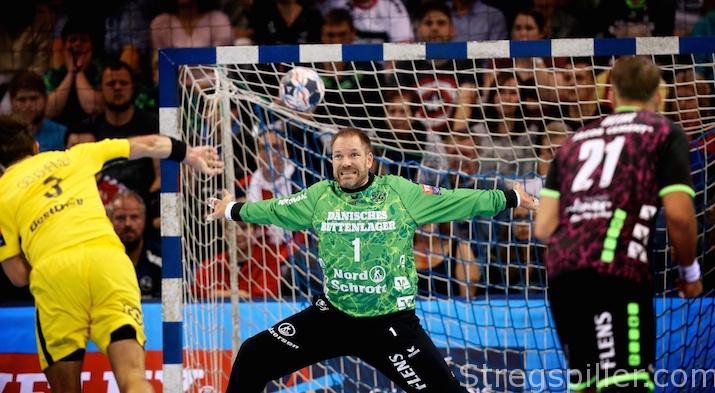 SG Flensburg´s Handewitt´s impressively outplayed the favorite, Paris Saint-Germain, and brought new excitement, not only to Group B, but to the entire Champions League.

The match demonstrated that PSG are not as invincible as many think, considering their impressive squad.

After round three, Vardar and Veszprém are now the only teams with maximum points.

PSG’s performance in their first two matches may not have convinced everybody – both encounters resulted in modest victories against Kiel and Meshkov Brest – but no one could possibly imagine the trashing of the French crew this past Saturday evening.  After a hesitant start, PSG seemed to have the match under full control, when they changed a 9:6 deficit into a 12:9 lead, but already before the half time buzzer did they start to lose the grip again.

What followed was a Flensburg handball extravaganza, led by Mattias Andersson in goal and Rasmus Lauge directing the game of Flensburg.  For long stretches in the second half, the visitors were virtually humiliated. And as the second half progressed, Paris could not find their way past veteran goalkeeper Mattias Andersson anymore.  On the  other side of the court Rasmus Lauge and Holger Glandorf were unstoppable.

While Flensburg deserve plenty of credit for their fantastic performance, it is hard to understand why Paris could not get more out of so many star players.

Uwe Gensheimer was the only PSG player who could be fairly content with his performance.

It is hard to argue with 11 goals – some spectacular – against the biggest Champions League favorite of all and against a goalkeeping legend like Thierry Omeyer.

Apart from consistently hitting the net, Lauge did a great job as playmaker as well. And if the 25-year-old Dane can maintain this level in the months to come, Denmark´s opponents at the European championship in Croatia will feel the heat in January of next year.

I have to repeat myself – Mate Lekai was outstanding once again, for a second weekend in succession. He was the key factor as Veszprém got out of trouble, succeeding in Brest.

This time, the Hungarians left Belarus after a hard-fought 29:26 win against Meshkov Brest. Lekai was awesome, not only because of his eight goals, but also because of his fine playmaking.

At this point Aron Palmarsson is a faint memory.

After defeating Kiel 32:21 last weekend, the Polish handball powerhouse suffered their second defeat on the road, in the tournament. From the start, Celje took the Polish champion by surprise, leading 15:9, before Kielce managed to reduce the gap a bit before half time.

In the second half, Kielce got close to catch up on a few occasions, but the distance never diminished to less than one goal.

Getting their first points of this Champions League season, Celje gained new hope to proceed from Group B, while the match refreshes the question, how long Kielce’s management will keep their faith in Talant Dujshebaev.  At times, the Spanish head coach looked more frustrated than constructive, like a man without clue how to turn things around on the floor.

The movie title “No Country for Old Men” does not apply when talking about handball goalkeepers.

They often prove that age is far from being a handicap in handball – quite the contrary.  Mattias Andersson (39) and Thierry Omeyer (41) are two of the best examples to prove the statement.

Over the course of the whole match, Andersson clearly decided the duel in his favor, although Omeyer looked sharp in the first 30 minutes.

Family reunions on the pitch are especially fun to watch, but when Celje defeated Kielce (31:27) in Group B, the younger Dujshebaev enjoyed a last laugh.

Not only was 20-year-old Daniel Dujshebaev in the winning team – he also played better and scored a goal more than his five year older brother Alex.

“It’s been a long time that another team scored 20 goals against us in one half.” (Noka Serdarusic after the loss of Paris in Flensburg)

The fact the Meshkov Brest lost 26:29 at home to Veszprém did not prevent them from scoring spectacular goals – when Rastko Stojkovic made it 21:20, with twelve minutes into the second half, shot around his back while hanging in the air above the pivot line.

Other Matches of Round 3

In Group A, Rhein-Neckar Löwen drew for a second time, as their Wednesday match in Nantes ended 26:26.  The Lions had victory in their hands but Cyril Dumoulin denied Andy Schmid from the penalty spot as time had run out.

In the other match on Wednesday, Kiel recorded their first points in Group B after a narrow and hard-fought 27:26 win, at home, against Aalborg.

It has the taste of “Match of the Week”, when third-placed Pick Szeged will receive Group A leader and reigning champion, Vardar, on Saturday.

Likewise, the encounter between Barcelona and Nantes looks interesting as Kiril Lazarov returns to his former home court.

And so does, Group B match between Kielce and Flensburg. Can Kielce revenge their poor performance in Slovenia at home against a confident Flensburg team?

Paris Saint-Germain should be able to rise again at home against Celje, while Veszprém is expected to defeat a discouraged Kiel.