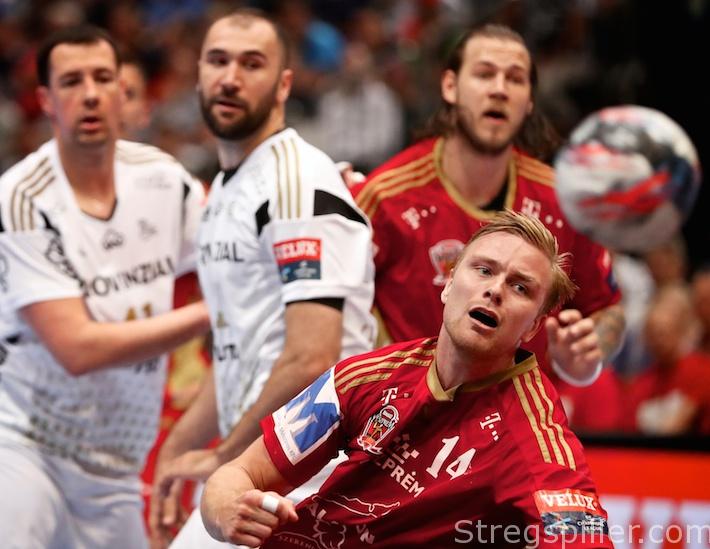 Hey Aron Palmarsson, I hope you’re reading.  I remember quite well when you told me, we, the journalists, could do some more stats.  When I asked you what you dislike the most in handball, you said: “That you guys don’t do enough stats!”  True, there’s almost no reliable or really interesting statistic in handball.

Because what does it really tell us when Uwe Gensheimer or Victor Tomas score on 85 percent of their shots or if one team had five more players sent to the bench for a suspension?

It tells a bit, but not the whole truth.  Let’s take German captain Uwe Gensheimer as an example.  I didn’t check any match report and just made up the following example in my mind.  Gensheimer, arguably the best left-wing in the world at the moment – for sure one of the top five, there’s no doubt about it – plays for his national team in a game against France.  Let’s imagine it’s the final of the next world championship.

Gensheimer has scored on an impressive 89 percent of his shots during the tournament prior to the last game. Quite impressive, I’d say.  He has done it against low-level teams, but also against top-tier opponents.  Most of his goals have come from the penalty line (91 percent) and on the fast break (95 percent).  He is less successful from the wing (85 percent).  But overall it would translate, him being on fire.

In the final match, Gensheimer is only able to convert 66 percent of his shots.  However, after missing his first try from the line, hitting the inside of the post – it can happen to the best – his replacement Tobias Reichmann converts all five of his attempts.  On his first shot of the game, from the wing, Gensheimer was clearly fouled, got off a throw, but couldn’t beat the keeper.  Nevertheless, he scores on his next four shots.  So what does it tell us about his performance?

By his standards, a shooting percentage of 66 percent isn’t exactly “good”; it’s not good enough for a winger anyway. Gensheimer scored four times overall, which isn’t necessarily bad but what the statistic doesn’t show is the quality of shots, Gensheimer had taken.  Is there a way to make sure the box score will show it?

It will be hard, but there could be a way and it might be even better and easier when it comes to measuring overall performance quality in a tournament or over the course of a season.

In baseball there’s a quite interesting statistic called W.A.R. (Wins-Above-Replacement).  The WAR value calculated for a player reflects the number of additional wins his team has achieved above the number of expected team victories if that player was substituted by a back-up player.

Let’s make it a handball statistic: You take the average shooting percentage of any left-winger during the whole tournament and compare it to Gensheimer’s rating.  So, let’s assume percentage-wise Gensheimer scores 0.7 goals per game more than the average left-winger, given the same amount of shots.  Gensheimer’s W.A.R. would be 0.7.

It’s also important to note that you have to take in perspective that Gensheimer is having a massive advantage in W.A.R. compared to a playmaker, who after of all, doesn’t always run a fast-break or sometimes doesn’t even play defense.  Also, while a playmaker will tend to assist in goal scoring, wingers are there to take the shot.  There’s a need for a formula, to make sure you can find out who gives his team more wins.

To be honest mathematics wasn’t my biggest strength in school.  Still, with a good statistical system, it might be possible to calculate, how many more goals wingers score compared to playmakers or line-players.

In the end it could lead to a total different approach in how to rate a player.  Yes, you need a lot of people doing stats, but I guess every club in the top leagues and / or the federations, like the EHF or IHF, could afford a mini-jobber.

So do you still think that stats lie? I don’t.  And just like Aron Palmarsson, I would love to see more of them in handball.

Stats about a player’s performance during crunch time, against weaker teams, against stronger opponents, there are a lot of options.  And trust me coaches would love it, because in the end stats don’t lie.