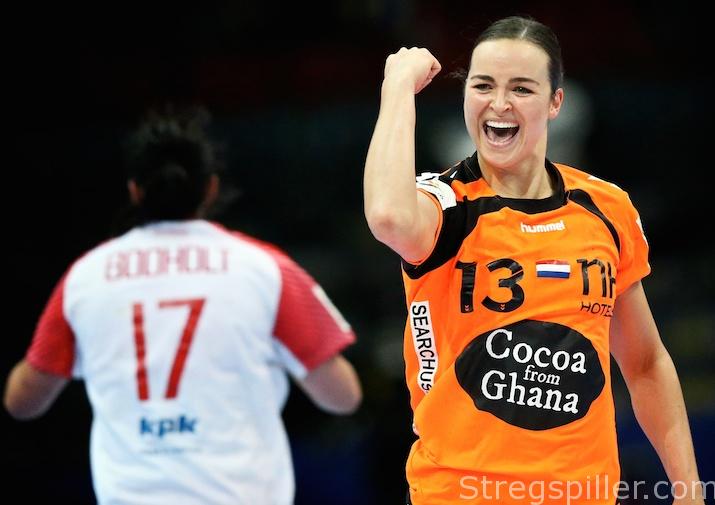 Yvette Broch joined Hungarian powerhouse Gyor in the summer of 2015 and wanted to learn from a legend like Heidi Løke. Now the Norwegian is unable to play because of her second pregnancy, so the young Dutch line-player had to take on more responsibility earlier than expected. I talked to Yvette about the new situation, the upcoming Final4 of the Champions League and handball in the Netherlands just days before the big event in Budapest.

Let’s talk about the team first. Maybe you can provide a short summary of your season, so far. What has worked out well, where do you still see room for improvement?

YB: I think, we have a good crew and we proved this year that once again that we are one of the best teams in Europe. But is has been a difficult year since Heidi Løke got pregnant and that’s a big loss for us. Everybody had to step up. But I think during this season we did a very good job. But, as you said there’s always room for improvement. I hope you can understand that I can’t tell you more about our week points at the moment.

How do you rate your chances against Buducnost in the Champions League Final4, a team, which might offer the better backcourt with Katarina Bulatovic and Cristina Neagu (at least from my perspective) and the more physical line-player with Dragana Cvijić? What will be needed in order to reach the final?

YB: I think it’s a 50-50 game. They have a very strong team and they have superstar players. They are also playing together for a longer time, which is a big advantage.

How do you think your role has changed since Heidi Løke does not play anymore in Gyor? It’s not just about you getting more minutes but also more responsibility. How do you experience this new situation?

YB: First of all, I’m really happy for her, because that’s what she wanted. So it’s great. But for the team it’s a very big loss, as I said. I like to take and have more responsibility, although it’s impossible to replace Heidi Løke. I can’t do that by myself. I also need my teammates to help me. But it’s nice to play more in offense and defense alike.

I still remember when you were moving to Metz and the huge step forward you made during your last year there. Where did you improve most in your eyes?

YB: In defense, definitely. I really begin to enjoy playing defense. That’s probably where I made the most progress.

Has the role of the line-player changed from your point of view and how do you see it developing in the future?

YB: In the last years, I don’t really see a big difference in the role of the line-player. At least not the extent that I have experienced it.

The Final4 is just a few days away. Do you feel nervous already or at all?

Timur Dibirov of Vardar’s men’s team told me recently that he remembered their loss to Flensburg in 2014 until their match last week. How much do you have last year’s historic final against CMS Bucharest on your mind?

YB: Of course, I remember it very well. But in another way, this is sports. It was really hard and difficult to lose the final on penalties, but I always try to get the positive things out of it and it was such a good experience to play the final. However it will probably stay on my mind for a long time.

Well, maybe you get a chance to get it out of your mind rather soon. Lately I asked Lois Abbingh about it as well – do you see any chances of a super-strong club team in the Netherlands developing after the recent success of the national team? Countries like Macedonia or Montenegro only have one good team as well and compete for the Champions League title.

YB: I think right now, the responsible people in the Netherlands are really focusing on the kids and the young players. They are trying to build an academy for talents so that there will be a new generation – a good one – after ours. But right now, handball is not popular enough yet, although it gets more support every time we do well with the national team. So, I think in the future there will be a possibility to have a good club team as well.