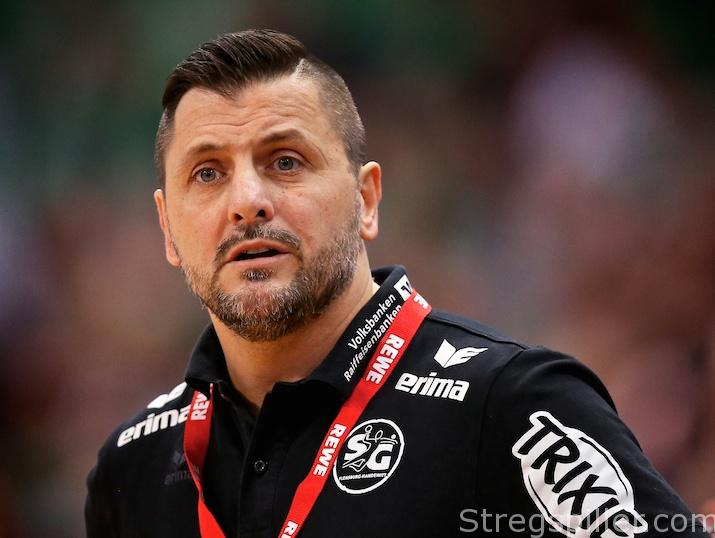 On Thursday, Flensburg have an extremely steep mountain to climb in Skopje.

The match today, took place exactly three years and one day after the two-teams´ previous quarter-final meeting in the Champions League.

Remember the unforgettable quarter-finals, when Flensburg secured access to the FINAL4 based on away-goals?  Eventually, the team from the north of Germany went on to win the Champions League.

This time, Vardar were allowed to skip the round of Last 16 as group winners.  They proceed directly to the quarter-final.

Flensburg, on the other hand, had their troubles overcoming Brest Meshkov.  Having won 26:25 on the road – after leading 25:20 with 10 minutes left – the North Germans were teetering on the edge of exit against the Belarusian champions at Flens Arena.  Yet, Flensburg managed to land a narrow 28:26 win in the end.

Prior to the quarter-final match, Vardar’s owner, Sergey Samsonenko, had added extra “flavor” with some rather controversial remarks.

Samsonenko threatened to “leave handball”, if he got any “trouble” from the Danish referees Mads Hansen and Martin Gjeding who have been nominated for the return match, this upcoming Thursday.

“Why must we have Danish referees, when all of Flensburg´s sponsors are from Denmark?” Mr. Samsonenko asked earlier in the week, implying that the two Danes robbed his team of the 2014 FINAL4 participation.

Exactly on the 25th year anniversary of their promotion to the German Bundesliga, SG Flensburg-Handewitt did not have any reason to celebrate.

Flensburg restored some honor in the second half, but they did not rescue the result, which brings Vardar extremely close to the FINAL4 in Cologne, after having missed Europe’s premier tournament three years in a row.

The game belonged to Vardar from the start.

Ljubomir Vranjes called for time out after nine minutes already – his team had only scored once, compared to three Vardar goals.

The early break in the game did not bring about any positive change, when taking Flensburg’s perspective. Instead, Vardar increased their lead via 5:2, 10:5 to 12:6.

The visitors kept changing between a 6-0 and a 5-1 defense formation, pushing Joan Canellas forward instead of Timur Dibirov who usually occupies the advanced position.

When Flensburg’s players finally got their scoring opportunities, Arpad Sterbik stood in their way.  The 37-year-old Serbian born, and now Spanish goalkeeper, showed that he still is one of the absolutely best shot-blockers in the world.  He proved it again and again at Flens Arena this Saturday afternoon.

It helped Flensburg’s attack a bit, when Vranjes sent Kentin Mahé on the pitch, with 20 minutes into the game.

The French world champion added desperately needed pace and creativity to the German attack.  Still, it was not enough keeping Vardar from accumulating a six-goal lead.

As the first half progressed, and with the self-confidence of Vardar players increasing, the visitors stepped up the quality of their offense as well.

As a result, Vardar took a deserved six-goal lead into the half-time break.  When was the last time, Flensburg were six goals down at half time on home court?

However, they continued having troubles with Sterbik, and on the other end of the court, Flensburg still had no recipe of how to deal with Vardar´s vivid offense.

Yet, Flensburg began to reduce Vardar’s advantage.  An important figure during this comeback of the home team was goalkeeper Kevin Mølller.

Neither he nor Mattias Andersson had much success in the first half or early in the second.  But towards the end, Møller got a better grip on Vardar’s shooters.

The future Barcelona keeper performed save after save in the last 10 minutes, as Flensburg cut the seven-goal deficit at the start of the second half to “only” two.

“Only” has to be in quotation marks, as a two-goal defeat at home is obviously far from being an acceptable result for a team like Flensburg.

Arpad Sterbik´s saving percentage dropped a bit in the second half, but he still played a decisive part in Vardar’s win.

As I said, he does not look like a top athlete at first sight, but you quickly forget about you first impression, once you see him lifting his foot to the crossbar.

Sterbik was the individual star, in a strong Vardar squad, who made the surprise possible.

Highlights of the Match

First, when Hampus Wanne reduced the score to two goals for the first time, in the 49th minute, benefitting from a pass across the goal area from Lasse Svan, and scoring after a brilliantly executed Kempa trick.

And, of course, Timur Dibirov´s amazing spin shot around Kevin Møller from left wing, making it 25:21.

Flensburg director Dierk Schmäscke wanted Flens Arena boiling.  Naturally, it did not reach this phase as long as Vardar were leading by six and seven goals.

Vardar supporters were in the driver’s seat at the time. However, as Flensburg slowly closed the gap towards the end, of the match, and we could hear “Hölle Nord” again, loud and clear.

Can it go wrong for Vardar once again?  Probably not.

After missing the FINAL4 in Cologne three years in a row, this should be the first time, when Skopje’s men will join the women’s team from Vardar, making it to the final round of the Champions League.

And, if Flensburg wins by three goals or more at Jane Sandanski arena, on Thursday night, I am sure Mr. Samsonenko will have something to say about the referees – no doubt whatsoever.

Veszprém will need a good performance on the road

Veszprém will have to fly to Southern France with a certain anxiety after the match against Montpellier.

Their 26:23 win at home, on Saturday evening is not enough to feel safe and secure.  Laszlo Nagy & Co. will need to show a good handball game on the road, in order to make it to Cologne again.

A red card for Istvan Schuch after 17 minutes did not entirely explain a shaky Hungarian performance. Several times, Veszprém were heading for a more comfortable result, as they were leading by five goals on several occasions.

When Laszlo Nagy increased the advantage to six goals, (24:18) with less than eight minutes to go, the home team looked like the obvious candidate for Cologne.

However, Montpellier came back once again, and I would not be the least surprised if they perform another sensation, next weekend.  First Kielce, Veszprém next?