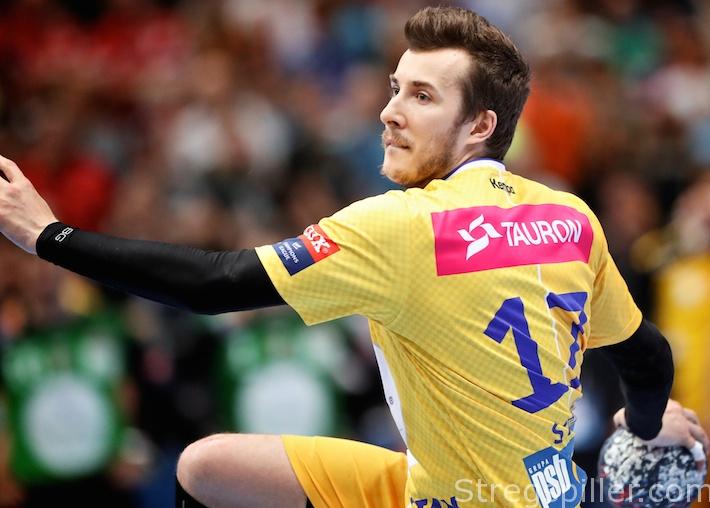 Croatian left-wing Manuel Strlek has won the domestic double with his former club RK Zagreb and his current team from KS Kielce for nine consecutive seasons.  I was wondering if it’s not getting boring for him and how it is possible to find motivation every time he takes to the court.  Obviously, we also talked about his move to Veszprem when I met him in Poland, we spoke about the defeat against Montpellier in the Champions League, his personal objectives and his future in Hungary.

After your first match against Montpellier I thought it would be hard for you to make it to the next round. How much confidence did you have left after the loss in France?

MS: Well, five goals is a big difference, but then it’s not.  If you play well at home with great fans you can do everything, but  this season we were not on the same level as last year.  But we”blacked out” in the first game in France when we led by some goals and then we did the same in the second match.

Do you agree with me when I say that Montpellier was just a bad match-up for you and a slower, heavier team like Veszprem would have suited you more?

MS: That’s really hard to say, now.  We played them last season as well and we know they play a fast handball.  But this time they really played great handball.  They have five World champions on their team, some medal winners from Slovenia… I think they also have a very good chance to beat Veszprem.

Let’s talk about you.  You decided to join Veszprem in the summer of 2018.  It’s actually not that far from Zagreb, your home town.  Did this circumstance influence your decision?

MS: Obviously, it’s a plus, but it wasn’t the decisive factor.  I wanted to take on a new challenge.  I will have played six seasons in Kielce and we have won the Champions League last year and the league and cup title every time since I came here. It was time for a change and Veszprem was the best option I had, because they will build a new team with a great, new coach and hopefully I can help the club to achieve its goals.

Actually, how difficult is it for you to find motivation when you keep on winning domestic titles – first in Zagreb, now in Kielce – every year?

MS: In sports, if you want to be a great sportsman, you need motivation.  I always find enough of  it – I want to win everything.  This is pushing me all the time.  But success won’t come easy this year because Plock has a very good team and they also changed the rules of the competition.  It will be hard.

You participated in all major tournaments in recent years, and you play a lot of games in the Champions League.  Do you feel tired?

MS: I cannot say that I feel tired.  It’s the same for all players, not only for me.  Handball is fast these days.  But we will have the summer off to rest our legs and I hope I will be in great shape again next season.

I talked to Domagoj Duvnjak after the bronze medal match of the World championship this year, he was beat-up and could hardly walk.  Are you sometimes happy to be a winger compared to a play-maker like him who has to handle all the responsibility?

MS: Every position has advantages and disadvantages.  But I have to say with Duvnjak it’s different because he usually plays 60 minutes in Kiel and every game and here (in Kielce) we have a different system.  Here every player plays 15 minutes per half so it gives more time for recuperation and rest.

Is it hard for you to accept this kind of system?

MS: It’s not easy, because you prepare yourself for it mentally. We play in this system for almost three years now, it’s the same for everyone and I think every player is satisfied.  Every player has certain things to do during his time on the court.  But we have less injuries and more time to rest.  So we are less tired than others.  Obviously, as a player you want to spend more time on the court all the time but when you prepare yourself for it; I think it’s a really good system.

You have a big season coming up next year, including the EHF EURO at home, in Croatia.  Do you feel any pressure of winning, at least, a medal?

MS: First of all, I have to say that in Croatia there is always pressure.  In the last ten years, we were always fighting for a medal.  But it’s hard to be on this level all the time, especially when you host a championship.  We have a really good national team, so I just hope for the best.

Do you think the fans in Croatia will understand if you don’t make it to the semi-finals?

MS: That’s why I say it’s a problem, because fans in Croatia think we have to make it to the semis.  Seven, eight teams can end up in the semi-finals.  The level at the top of handball is quite close, now.  Six, seven, eight teams could win the title, depending on the form of their goalkeepers, a little bit of luck and so on.

I remember when you showed up big in the national team at the 2010 EHF EURO in Austria, making the All-star team of the tournament right away.  You have played on a high level ever since.  Do you think you can still improve ?

MS: Off course, always.  In sports you can always improve your skills.  That’s why you give 100 percent every day in every training session and in every match.  Once you have reached a certain level it’s harder to improve but I hope I can still get better in the next years.

One final question – when you compare yourself to other left-wings, do you think you can keep up with the best?

MS: I have to say that I don’t think this way.  I always want to win.  It’s always great to be nominated for an All-star team – it’s nice.  It’s obviously great to be named together with the best.  But winning medals with the national team or titles with my club is my first priority, that’s my plan!