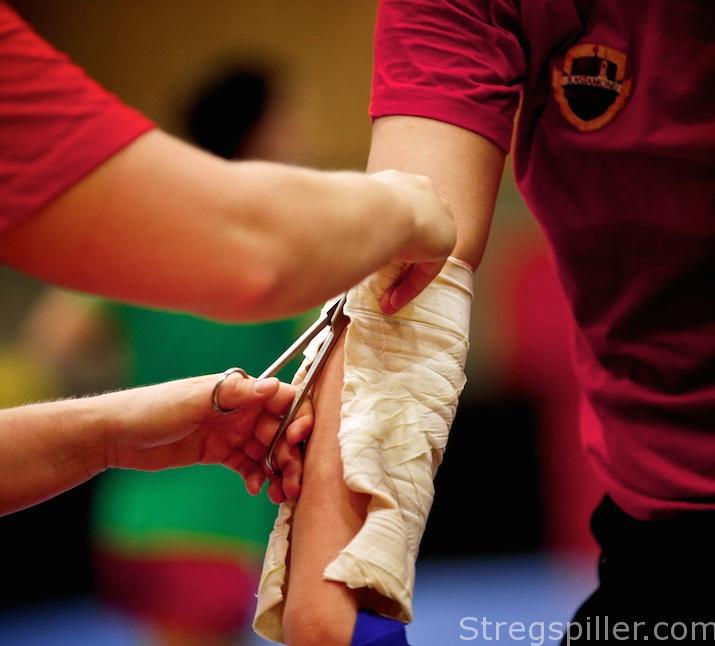 “If you do this in the street, you end up in prison”

The first matches in the 2017/18 Champions League have been anything but a kind experience for German champion SG BBM Bietigheim.  But there’s more behind it than just two losses against formidable opponents. Martin Albertsen, the Danish head coach, is not happy with the results so far.  What angers him more is an issue that he really cares about – players safety.

I talked to him about what happened in the game against Buducnost, why his players struggle adapting to a different level of handball and what he is expecting from the upcoming World championship.

To be honest, I was a little disappointed by the recent results in the Champions League. What about you?

MA: Well, I’m with you, and I already said it after our home loss to Metz. We are still not at the same level of last season.  We lost Maura Visser due to pregnancy and she is very important for us.  She is a key player in offense and defense.  Right now, we are still trying to replace her with a few different players in our team.

Do you think the Champions League is coming two months too early for you, as you signed a fantastic player with Karolina Kudlacz-Gloc?

MA: Yes, that’s true, she is a great player, but she gave birth to a child this summer as well – we are in a hurry to integrate her into the team.  Individually she is right on top, but it’s a challenge to be ready and play well with your teammates.  Champions League, though, is perfect for us.  We can play against the best and up to our level.  The question is: Will we be able to develop fast enough to survive the group stage.

Let’s talk about what made you angry, when you played against Buducnost Podgorica. What exactly did upset you?

MA: We were playing a fast-break, a third phase fast-break, actually.  Kim Naidzinavicius came charging down the court with a lot of speed, ready for a jump shot. Then, in mid-air, a player of the home team attacked her upper body with a lot of power from the side.  It was a tackle that had nothing to do with handball. Obviously, we wanted to win the game, but in a fair way.  We don’t enter the court trying to injure other players.  I think we as teams also have some kind of responsibility when it comes to representing our sport.  If parents are watching games and see incidents like this one and think about what sport might be good for their child, they will probably say, “no – thanks”, that’s not a sport for my kid. Games like this one are not good advertisement for handball.

Was it only this one scene that you object to or was it a tough game, in general with the referees having difficulties maintaining consistent judgment?

MA: I think the referees didn’t have control of the game. But at the same time, I know that those referees know enough about handball, and the same goes for the Russian EHF official at the scoring table.  He has been a referee himself.  Basically, the home team set the standard, not the referees.  They slapped players into the face, it had nothing to do with handball.  I have seen a lot of games in the Champions League and the players should represent the Crème de la Crème.  It all got out of the referees hands.  We respect the game of handball and our product and we don’t want to ruin it.

What can be done to avoid incidents like this one in the future?

MA: Well, they play like this until referees stop it.  I got my contacts within the European Handball Federation and by sending them video clips, I can make sure they will notice it and do something about it.  I know there are a lot of people trying to make handball a fair sport.  It’s a sport that can attract a lot of kids.  It’s our responsibility to make sure that handball is a sport people love to watch and love to play.  We can’t compare ourselves to kick-boxing or something like this.  Even there, rules have to be observed.  In handball, you can’t just slap players in the face.  We have to be very careful.  Safety is an issue – I know it’s a topic.  If you do something similar of what happened in Podgorica, in the street, you end up in prison.  It just doesn’t work like this.

Did you get a chance to talk to the referees after the match?

MA: No, they didn’t want to talk.  The EHF official also told me to stay away from the referees and threatened me, saying that he got a lot of contacts within the EHF.  But I know these people are coming from a different culture where we come from in Germany or Scandinavia.  We just have to try making the sport (handball ed.) a fair sport.

Are you optimistic that it’s possible considering players are getting faster and more physical every day – hard fouls are almost inevitable if you know what I mean?

MA: I know what you mean, but those players are still able to control their body.  For me, it’s not a question about handball being a tough sport, but about fairness.  Kim didn’t even see that a defense player was going to hit her. We have rules and I like our rules – such rules are sufficient.  But we need good referees applying these rules.

What will you do next, because I saw you received a lot of feedback on social media?

MA: I did what I could. I got a lot of feedback from my coaching colleagues.  Also EHF people told me that they will try their best going forward.  But we have to understand that the EHF is a big federation including people from almost everywhere, from the East and from the West.  People will always have a different perspective.  In the end, the EHF has to make sure that such incidents don’t happen and do a good job promoting our sport, in a perfect way.

Finally, the World championship is just around the corner.  Who’s going to win it all and which teams will go far?

MA: It’s always interesting to predict a World championship, but I think that Norway has developed such a winning culture and is above and beyond all other teams, right now.  They are my pick to win the tournament.  It will be exciting to see if other teams will be able to beat them.  Russia has struggled lately.  A lot of players in Bietigheim are on the Dutch national team and they have played really well in recent tournaments.  They will go far.  Germany has high expectations – the semi-final should be a realistic goal.  Brazil got a new coach from Spain, we have to see if it frees up some energy.  I just hope for German women’s handball that Germany will play a great tournament to promote the sport.  And finally, I hope my Danish compatriots will show some development.  Their roster is good enough to compete with the best teams.