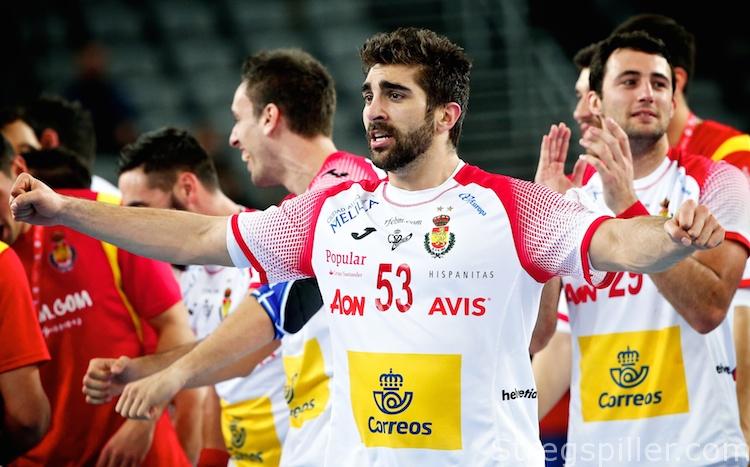 “Sunday’s game will be one in a lifetime”

David Balaguer is one heck of a successful handball player. After grabbing the gold medal at EURO 2018 together with his Spanish teammates, the right-winger of HBC Nantes has a golden opportunity to reach the 2018 Champions League Final4 this Sunday – on one condition: Protect the six-goal advantage that the French side gained in the first leg of the quarterfinal.

“It’s going to be a tough one, but I think everybody in the team knows how important this game is and what we’ve done to get to this position.

“And if we keep in mind – in every action during the match – that if we win, we’re going to Cologne, things will be much easier,” says Balaguer.

His club has been one of the two surprise teams – Skjern being the other – of the 2017/18 Champions League season. While experts were counting on a fifth or a sixth place in the group phase, the “Purple Army” came in third, ahead of other European powerhouses such as Rhein-Neckar Löwen or Zagreb.

After all, a trip to Cologne was well within their reach.

” We’ve been dreaming about it since day one, to be honest.

“And as you go on, the more you realize that Cologne is not that far away.

“We have to remain ambitious and cautious at the same time because nothing’s done yet,” Balaguer carries on.  He compares his team’s current situation to the one of his favorite football club.

“I feel a little bit like Barcelona versus Roma (in the football Champions League ed.) a couple of weeks ago.

“You would have thought they were qualified after winning so easily at home.

“I was not so happy about the final outcome of this match, but it shows that everything’s possible.”

The difference between Nantes and Lionel Messi & Co.  is that the French team hasn’t reached the top yet and still has everything to gain. And that they appear to be unfazed by all the excitement around them.

“We want to win in Skjern, but we don’t want to think of the consequences when we do.

” I mean, we don’t brag about going to Cologne or anything like that,” he says.

Actually, David Balaguer is one of  several Nantes players who’s been to Cologne, but that was when he played in Barcelona, a long time ago. Back then he visited Lanxess Arena along with Eduardo Gurbindo and Kiril Lazarov, two players who now wear the same jersey as him.

“I feel privileged; I went there twice;I entered the court; I took part in the warm-up but didn’t play.

“Now, I want to go back again, feel the atmosphere, but as a player on the field,” he explains.

Making the trip to Cologne would make this season by far the  most successful one in his career. Still, the second leg of the Champions League quarterfinal doesn’t qualify as the game of his life.

“I already played it at EURO 2018 in Croatia together with the national team. But of course, as far as club competition goes, this will the best you can experience and for the club, Sunday’s game will be one in a lifetime.”