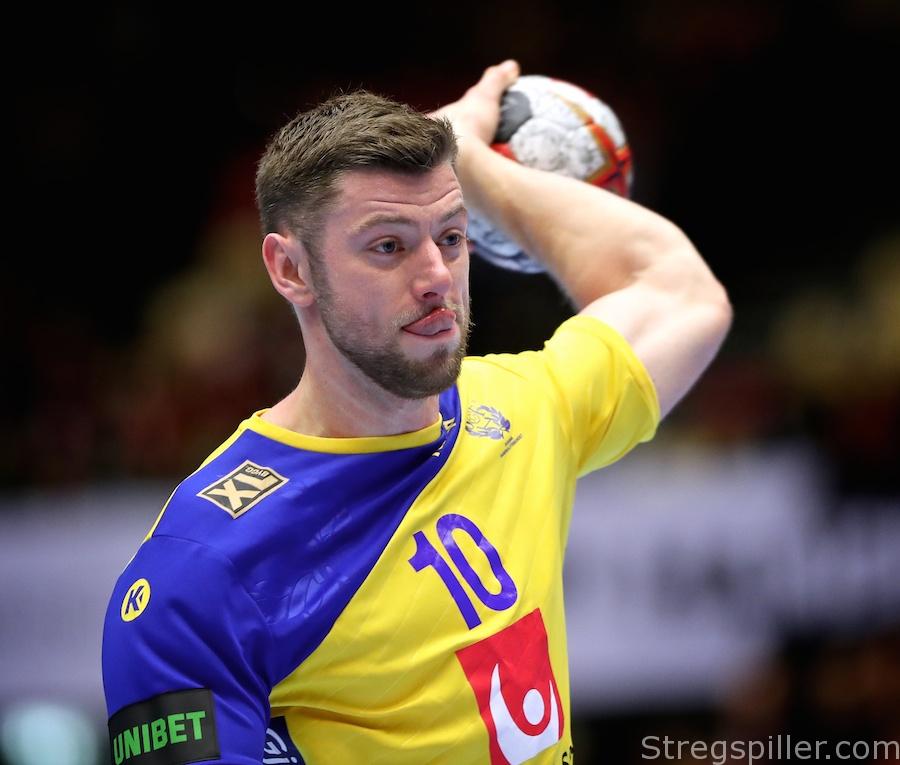 MATCH REVIEW – It took Sweden about 14 minutes to get going in their first main round match against Tunisia, but when they finally did get a grip on the match, they cruised to an easy 12-goal win.

Tunisia had reached the main round as the third team of Group C, but they didn’t bring any points forward.

On the one hand, they needed a win, if they were harboring any hopes for a semi-final appearance.  On the other hand, they had everything to gain and could play free of pressure, as no one expected them to succeed – not in this match and certainly not advancing to a semi-final.

Sweden went through their Group D without losing a single point, as a result the Scandinavians arrived in Herning on maximum points.  However, “Tre Kronors”  were without Jim Gottfridsson due to injury, possibly for the rest of the competition.

Sweden were also missing line player and defense specialist Jesper Nielsen, still the Swedes took to the court as the odds-on favorites.

The injuries did not impact Sweden at all, as the favorites needed only 13-14 minutes to get complete control of the game. Earlier Tunisia were leading by two goals several times, before the Scandinavians took the initiative and never looked back.

Supported by the tunes of some old Swedish hits during the breaks of the game, Ekberg & Co. took control as of minute fifteen.

However, Tunisia had the better start, and were leading by two goals at 3:1, 5:3 and 6:4, as Sweden’s traditional 6-0 defense formation had significant troubles dealing with the North African attack.

But, when Niclas Ekberg handed Sweden their first lead (9:8 – 14th minute), for Tunisia it meant downhill from then on.

The addition of Kim Andersson changed the course of the game.  The 36-year-old veteran still is a brilliant defender and on the other end of the court, his eye for the game is just as fantastic as it ever was.

Three powerful goals on his own, were further proof that his left shoulder, which once was in such bad condition that it threatened to end his career, seems to be totally fit again.

As a consequence, the Scandinavians were leading by six goals shortly before the break.

Tunisia’s 5-1 defense system was not much of an obstacle anymore, and even when Kim Andersson called it a day, twelve minutes into the half, Sweden continued to dominate.

Sweden ran away, extending their lead constantly throughout the half and a 12-goal advantage separated the two teams by the time the final buzzer sounded.

For Tunisia, honor aside, not much will be at stake in their remaining two, main round, games.

Sweden, on the other hand, can start preparing for the Scandinavian derbies (against Norway (Monday) and Denmark (Wednesday)); two games that will decide which team will make it to the semi-finals in Hamburg, later in the week.