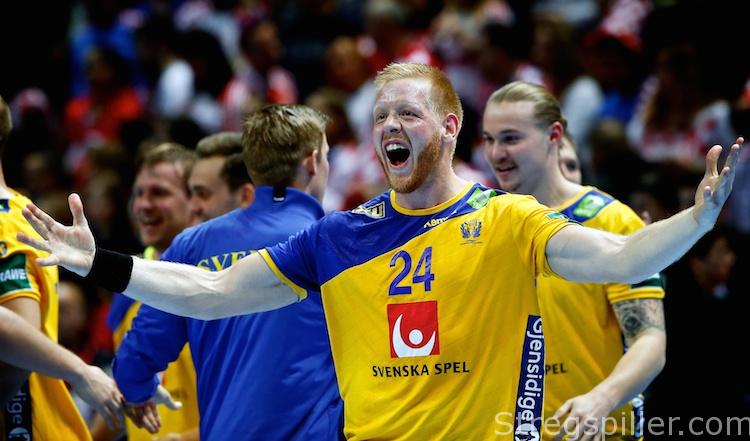 Sweden trashes host – Iceland in main round after thriller

Serbia were close to robbing Iceland of what looked like a secure main round berth in the very last minutes, in their last match, in Group A.

But Iceland managed to ride the storm.  The same could not be said about Croatia’s game against Sweden, where a four-goal difference at the end does not tell the whole story – not at all.

The terms were clear before throw-off at Spaladium Arena, in Split.

Serbia needed at least a four-goal win in order to stay in the tournament.

“Anything is possible in sport,” Serbian left back Petar Nenadic told stregspiller.com before the match, but the question was how much Team Serbia really believed in their chances against a resilient Icelandic team.

Iceland were not only playing for a ticket to the main round, they were also fighting for another two points for the next stage of the competition.

Who would have thought this game would turn into a thriller?

Only a save from Björgvin Gustavsson in the dying seconds of the game sent Iceland to the main round. For 58 minutes, not much was indicating that Serbia would get anywhere near a four-goal victory they so desperately needed.

However, when Nemanja Ilic gave Serbia their first and only three-goal lead with a minute left, a four-goal victory was within reach. And when Runar Karason missed on the other end of the court, Serbia suddenly had the opportunity before Nenadic was denied by Gustavsson.

4:2, 7:5 and 8:6 – Serbia enjoyed a two-goal advantage three times throughout the match, but each time it did not take Iceland long to pull back.  Nobody at Spaladium Arena had the impression that Serbia would be en route to Zagreb.  Winning the match – possibly yes, but nothing looked like a victory including a four-goal margin.

Scoring half of Iceland’s goals in the first half, Gudjon Valur Sigurdsson was major factor in establishing a draw by the time the two teams changed sides.

Although Serbia did not play with any sense of urgency they kept playing, believing that their time would come. Eventually, Iceland went up by two goals (15:13) still, Serbia did not give up.

They received their reward, when they caught up (23:23) and a bit later the Serbs even took the lead at 25:24 with less than nine minutes left on the game clock.  Thye managed to score one more goal but that was as far as they got.

The 32-year-old Icelandic goalkeeper did not only perform a saving percentage of 42 throughout the entire match.

He also made the crucial save in the very last second, that sent his team to the main round.

In the main round Iceland will start on two points, thanks to their win against Sweden.

Still, they will have their work cut out for them in a group, that includes France and Norway – the two finalists of the last World Championship.

Both teams were qualified for the main round already, still the match was important to both parties, to collect as many points as possible for the next phase.

Croatia had impressed in their first two matches, but Lino Cervar found it necessary to replace goalkeeper Mirko Alilovic with Ivan Pesic who currently plays for Meshkov Brest (Belarus).

Cutting a long story short it was an evening of sensations in Split.

After Serbia´s sudden chance to reach the main round in the last seconds against Iceland, Sweden demolished the host in front of a capacity crowd of 11,000.

The Scandinavian’s were dominating the match throughout 60 minutes, exposing numerous weaknesses of Team Croatia.

The first few minutes aside, when only one goal separated the two teams, the rest of the first half belonged to Sweden.

Soon the Scandinavians changed a 3:4 deficit into a 9:4 lead, after scoring six goals in a row. Thereafter, they stayed in firm control for the rest of the time.

It was a bit surprising that coach Kristján Andrésson started with Andreas Palicka in goal after Mikael Appelgren´s stellar performance against Serbia. But it turned out to be a good idea, as Palicka performed a number of brilliant saves.

Seeing Lukas Nilsson in the role of playmaker was unexpected as well, but the decision worked out to.

Despite trying several different defense formations, Croatia never got Sweden’s attack under control.  On top of it – Croatia has a serious goalkeeper problem.  Neither Ivan Stevanovic nor “newcomer” Ivan Pesic was able to do much against the Scandinavian sharp shooters.

On the other end of the pitch, Luka Cindric was unable to repeat his excellent performance from the Iceland match.  In a rather static Croatian attack, Igor Karacic stood out.

Sweden increased their lead to six goals (17:11) before settling for a five-goal margin at the half.

Croatia’s frustrations were on display, when Lino Cervar received a yellow card, objecting to a 7-meter penalty, caused by Manuel Strlek, who ran all the way through the goal area to tackle Sweden’s Mattias Zachrisson.

Sweden continued to dominate a high-scoring second half, as Croatia was unable to stop them.

Gottfridsson & Co. continued where they left off before changing sides and increased their five-goal lead to nine by the 40th minute.

At this point, coach Cervar decided to play seven-against-six, which he held on to for the rest of the match. Unfortunately, the tactical move did not help them either.

Croatia got some better scoring opportunities than before, but the Swedes scored even more frequently on the other end.

Sweden were particularly successful involving their wing- and line players time and time again.  As a consequence the margin of difference remained at seven to nine goals until the very last minutes, when Croatia managed cut the gap.

Quote of the Day:

Sweden take two points – and a load of self-confidence – to the main round, where Croatia will be starting on two points, which is less than the host was expecting – no doubt.

Group 1 in Zagreb will look as follows: