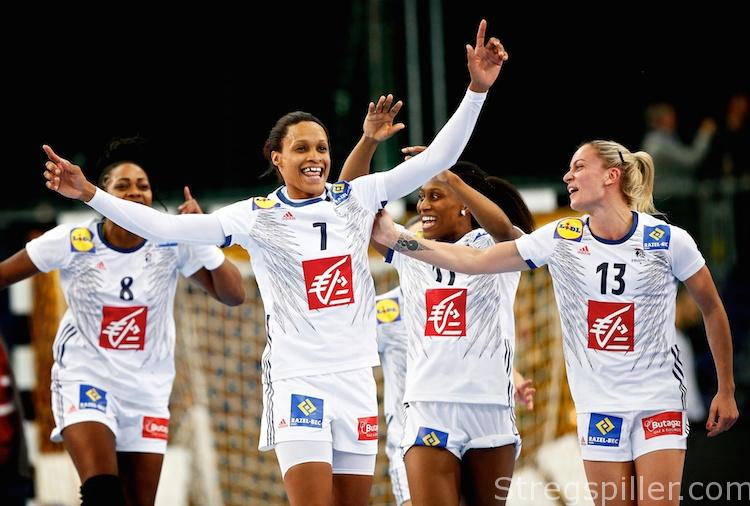 Sweden continue to make history at World Cup 2017, heading to their first semi-final ever after defeating Denmark in the Scandinavian derby, in Leipzig, on Tuesday.

In the other quarter-final, France did not have much trouble booking a decisive victory against Montenegro.

Both teams arrived at Arena Leipzig after impressive performances in the Round of Last 16.

Sweden had swept Slovenia 33:21, while the Danes eliminated the German host 21:17 without encountering any problems.

To Sweden, reaching the quarter-final had a historic dimension, as the nation never went any further than the Round of Last 16 in a women´s World Championship..

Before the game, Danes got the word out that they were going to use “pushing, slapping, striking and other dirty tricks” to get the win, while at least one Dane officially announced his support of the Swedes.

While the official bookmakers in the two countries held Sweden as the narrow favorite.  In Sweden, Svenska Spel had the odds at 1.70 for a Swedish win, while Danske Spil recorded 1.75.

Denmark got off to the far better start, but they were not able to hold on for long.

Changing goalkeepers and right back did the trick for Swedish coach, Henrik Signell, to turn the game around.  In fact, Sweden’s win was much clearer than the three-goal difference indicated.

And it was difficult to understand whyDanish coach, Klavs Bruun Jørgensen, waited until the 46th minute before playing seven- against-six, given Denmark’s struggles when in offense and it was just as hard to comprehend why he never changed goalkeepers.

It only took the Danes less than two minutes to get their first two minutes suspension, as Mette Tranborg was sent off.  But the penalty did not stop the Danes from getting an early 5:2 lead.

Sweden’s attack had obvious troubles with an aggressive Danish defense, and on top of things, Isabelle Gulldén was denied from the 7-meter spot by Sandra Toft.

On the other end of the court, the Danes did not have any problems getting the ball past Johanna Bundsen, as Stine Jørgensen and Mette Tranborg were on fire.

It all changed in the 17th minute when Sweden replaced Bundsen with Filippa Idéhn, and at the same time, Sweden’s offense got a boost when Hanna Blomstrand came in for Nathalie Hagman as right back.

On this night, Blomstrand was unstoppable as Denmark’s defenders soon realized, while Idéhn started with a couple of crucial saves.

At the same time, Denmark lost patience when in attack, leading to an increased number of missed shots, while Sweden made good use of their chances.

Denmark pushed back, regaining the advantage at 11:10, but the rest of the first half belonged to Sweden.

Filippa Idéhn continued where she left off before the break, and with Hanna Blomstrand as right back and  Nathalie Hagman occupying right wing, it was even easier for the Swedes to roll up Denmark’s defence.

In attack, the Danes neglected their wings, and as the game progressed, their two backs lost their thunder, unable to pressure Sweden’s defense any longer.  Adding to Denmark’s decline – a number of unprovoked technical mistakes.

With 14 minutes left to play and down 22:15, Danish coach, Klavs Bruun Jørgensen, called his last timeout and ordered seven- against-six.

This tactical move yielded some immediate results as the Danes reduced their seven goal deficit to only two at 23:21 and 24:22.

However, it remained a mystery, why Jørgensen did not try Althea Reinhardt in goal instead of Sandra Toft, whose performance had dropped drastically after a good start.

Denmark’s final push came too late and when Isabell Gulldén made it 25:22 with a minute and 40 seconds left, it was all over.

The 21-years-old right back, from København Håndbold, played a big role tilting the game in favor of Sweden.  She was the one who found her way through Denmark’s aggressive defense most often, scoring seven goals.

“We got off to a real good start – we stuck to our agreements, but as the first half progressed, we began to stand too far from each other when in defense.

“At half time, we talked about changing it, but we never got it right in our defense.”

Sweden will look forward to their very first World Championship semi-final, where they will meet France, in Hamburg.

France did not have many problems clinching their semi-final berth in the last match, in Leipzig.

Apart from Montenegro leading 2:0 and 4:2, the French were in control of the game all the way to the end.  Their attack functioned extremely well, and it quickly became obvious that coach, Olivier Krumbholz, had many more options than his colleague Per Johansson.

Allison Pineau’s form curve is trending in the right direction, following her long injury break.  She together with Grace Zaadi benefitted France´s attack a great deal.

Towards the middle of the second half France moved from 19:15 to 21:16, and despite a brave effort from Katarina Bulatovic, who scored nine goals, Montenegro were not able to come back.