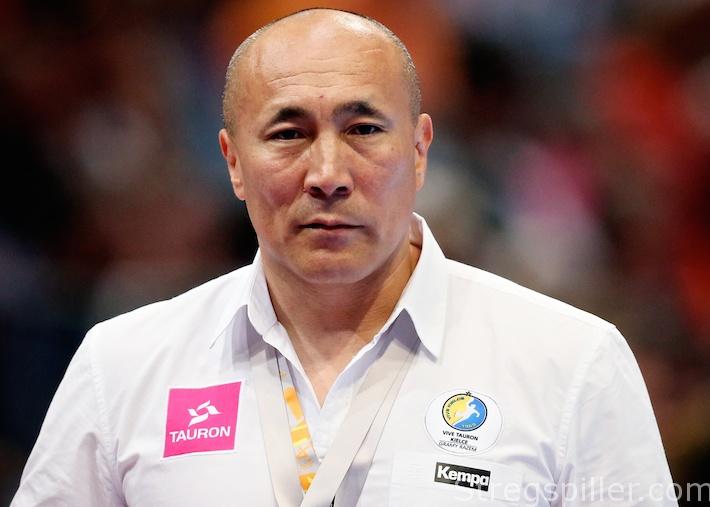 Many of you might have never had the chance to see him play, because he ended his stellar career nine years ago when social media didn’t rule the world.  Actually, he didn’t finish it the way he would have liked to.  Since then, he became the most successful coach on club level by far; winning the Champions League four times.  Talant Dujshebaev is known for being a handball mastermind, a superb strategist and motivator.  But he’s also one of the most controversial figures in the sport of handball.

When he started to play handball in his hometown of Frunze, Kyrgyzstan, then part of the Soviet Union, Dujshebaev was already 14 years old.  That he made it as far as he did, is testament of his immense talent.  Talent Talant was a swimmer and footballer before he took his skills indoors.  During his time in the military it was decided that he was good enough to join army club CSKA Moscow.  Soon he made it to the national team, where he won a gold medal at the 1992 Olympics in Barcelona.

Following the end of the Cold War a lot of Russian superstars fled to Western Europe and Dujshebaev was one of them, while still in his prime.  Teka Santander said “gracias” and within two years he had added a World Championship, the EHF Cup and the Spanish league title to his trophy collection.  The Champions League and two “World Handball Player of the Year” awards followed.

Wherever he went, he became a true leader.  His vision of the game was second to none.  The way he read a match set the highest standard for playmakers.  Back then, Magnus Wislander, officially the best player of all time, was his fiercest rival.  Dujshebaev even moved to Germany to compete with the very best, every week.  Until today, except for Wislander, only the great Ivano Balic was able to make players around him so much better, as Talant did.

After four years in the Bundesliga he moved back to Spain, joining Ciudad Real.  The club, established in 1981, had never won any trophy before Dujshebaev arrived.  During his 12-year spell with the organization, he won 26 titles, five domestic championships and three Champions League titles amongst them.  Any questions left?

The ability to make your teammates better is one thing, being able to do it from the sidelines as well is maybe even more impressive.  There’s just no other former player of his caliber with such a coaching résumé.  It’s no surprise at all that he went on to become such a great coach.  But it all happened a little bit different than originally planned.  As mentioned before, Dujshebaev is a very controversial character, to say the least.

He had just taken over as a playing-coach in 2005, when his career ended a bit earlier than expected, when he was suspended for twelve months for being involved in – some say caused – a fight with players from African champion Mouloudia, at the 2007 Super Globe.  It makes it somewhat hard to believe, as there’s not a single player who doesn’t love to play for Dujshebaev.

The secret to his success is probably embedded in his playing career.  Players respect him, they trust him and for some of them he’s like a second father.  He’s also able to adapt fast to new situations, leading perennial Polish champion – Vive Kielce – to win the EHF Champions League in May of this year, less than three years after joining the team.  It made him the only coach to have won the most prestigious club title with organizations from two different countries.

Could he become the greatest coach of all time?  Valero Rivera, the legendary Spanish coach, has won more Champions League titles, but he was not so special as a player.  That makes Dujshebaev, the former world-class player, an obvious candidate for “Best Coach Ever”.  Luckily he still has some years left to show that he is – at least to me – the master brain of handball.