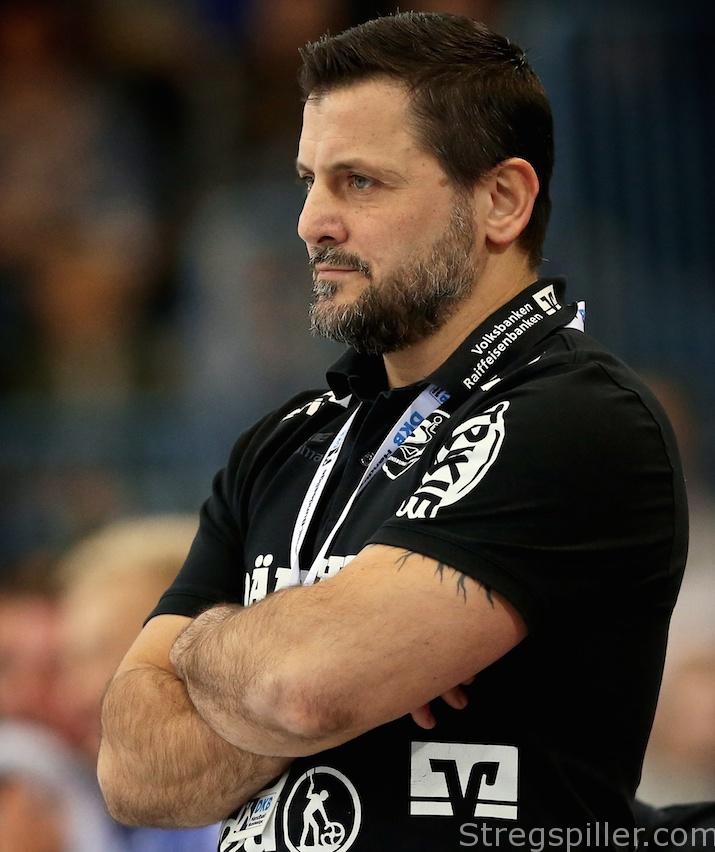 “For me the team is more important than a single star”

This summer has seen a big change of scenery for the long-time coach of SG Flensburg-Handewitt, Ljubomir Vranjes.  The former Swedish international with Serbian roots, now in charge of Hungary’s champion, Telekom Veszprem, is looking forward to the challenge.  But his first days did not turn out as smooth as planned when he encountered an unpleasant situation – Aron Palmarsson informed the club that he has no intentions to continue with one of Europe’s biggest teams.  I talked to Ljubomir Vranjes about his farewell from Germany, his thoughts on the Icelandic playmaker and his new team.

First of all, how tough was it for you to say “good-bye” to all the people in Flensburg, not only the team and the fans, but especially to the friends you made during your time there?

LV: Wow, that was really hard, because after eleven years friendships have grown quite strong and it was especially hard for my kids.  I joined them for their football or handball trainings and matches, when I found the time to do so.  But now it’s far away – we have started a new chapter in our life and we are looking forward to it.

Has it been tougher for your kids than for you?

LV: I think so, because I can put this move into perspective.  Kids only see their friends.  But I also see the future of my kids how much of a difference it can make, now that they go to an international school, for example.  They probably can’t look ahead that far, but we are happy for them and it helps their future.  But yeah, for them it’s more difficult than for us.

How did you experience your first days in Veszprem?

LV: Well, when you take it from a handball perspective, the first day was great, but the second day was a little bit turbulent, because of the Palmarsson story, when he sort of “checked out”.  But the rest was really good.  There has been a lot of excitement right from the beginning; the players were really motivated right away.  Personally there is some bureaucracy involved when you move to another country, but it’s going well.

Nice “assist” from you as a former playmaker regarding the story around Aron Palmarsson.  I’m not really interested to know why he did what he did, but how frustrating or disappointing is it for you as a coach to suddenly plan without one of the best, if not the best player in the world on this position?

LV: Well – there were rumors he wanted to join Barcelona, but I didn’t take them too seriously.  Actually, Veszprem tried to win the Champions League with Palmarsson twice and it didn’t work out.  Sure, he is an exceptional player, but for me the team is more important than any single star.  I now have a lot of stars on my team and all of them together are stronger than one single star, let’s put it like this.

That’s exactly what made you better in Flensburg, less stars, but a better team.  How much of a difference does it make for you to coach a team full of stars, now?

LV: Yes, that’s true, it’s different but it was a nice surprise to see how motivated they are and how much enthusiasm they are showing.  Especially because the team is a little bit older than most others.  It’s not like players are 20, 25 years old, but more like over 30, 35 years of age.  So, it really surprised me, but it’s a good team that’ s really interested to achieve something as a group.

LV: For me it’s always a goal to win the Champions League and the team has the same objective, they always had.  But for me it’s a bit different this time because I’m new to the Hungarian league.  Szeged is very good, Tatabanya is also good.  There is one, or two other fairly good teams, which also play on a decent level.  At least that’s what they told me.  And that’s important for me as well.  But of course, it’s our goal to make it to Cologne again and then to win the Champions League, finally.

Did you actually look forward to work with a certain player once you decided to join Veszprem, any special player you had in mind?

LV: No, not one single player, but the team in general, because there is so much quality in this team.  I already noticed that it’s possible to play handball with them, with the emphasis on “playing”.  You can see it – small things – they learn quickly.  There is a lot of quality on the playmaker position with Mate Lekai, for example.  He is guiding the team on the court.  I will have a lot of fun with him.

Is there anything you show respect for, something that might not work out?

LV: I have a lot of respect for the team, because I didn’t know the players and how they would react.  When you look at it from the outside you see a lot of stars, older players.  I didn’t know how they would play as a group and that’s why I have a lot of respect with regards to this particular issue.  Now, I can say it’s a group that sticks together.  And after ten days of training camp, I can say the team showed that there is no reason for us to not play good handball.  And when I talk about good handball I mean the atmosphere within the group, in the locker room and on the court – it’s a very good atmosphere.