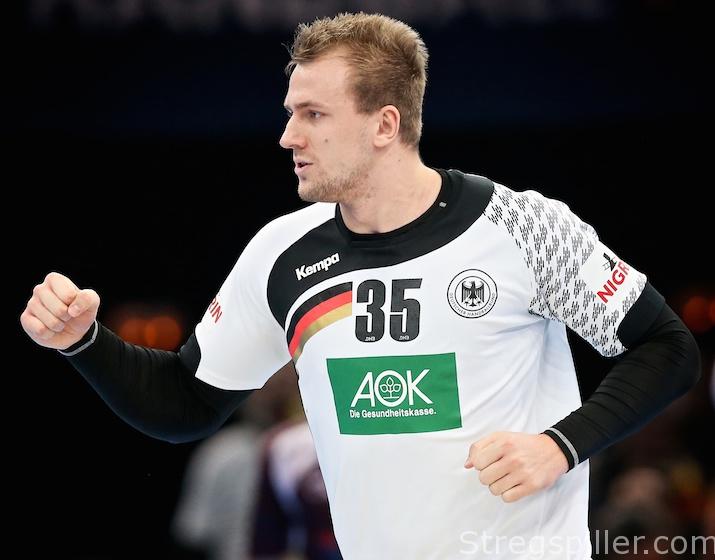 “Our team looks quite promising”

Julius Kühn took the world of handball by storm when he was called-up by then national coach, Dagur Sigurdsson, to join the German team that won EURO 2016 in stunning fashion.  At the time, he replaced injured Kiel player, Christian Dissinger, and Kühn hasn’t looked back ever since.  This summer he took his next step, signing with the ambitions club of MT Melsungen.  The goal is set: Qualifying for an event on the European stage is a must for the team from Kassel.  I spoke with the sharp-shooting left-back before the start of the new Bundesliga season.

First of all let’s look back at last year.  Your former club, Gummersbach, struggled quite a bit to avoid relegation, you missed some games due to injuries, and you took part in two major international tournaments.  How intense were the past twelve months for you?

JK: Obviously very intense.  There was not a lot of time to relax, and almost no time to rest.  Everything happened very fast.  But I think if you have the opportunity to participate in the Olympic games and in the World championship, then there’s no reason to complain about, as it is a lot of fun.

Still, did you feel the physical stress, as it was the first time you encountered this type of schedule?  You had a lot of more games compared to the past, when you “only” took part in the European championship – and you never had to play any international games with your club?

JK: I felt it, because I was injured twice.  But it’s difficult to say if such injuries happened due to increased stress.  Sure, it’s possible that it was caused by a heavier game schedule, and for sure, you can feel the difference.  It’s something else to be able to relax during the summer or in January.

JK: Yes, absolutely.  We trained well for the new season.  Especially in the beginning of the preparation phase we worked a lot on the athletic elements.  So, I think everything is fine.

What are your first impressions of your new teammates, as you already know some of them from the national team?

JK: Exactly – I knew some of the players from before and it was easy for me to find my place within the team.  The road ahead, I already had in mind.  I’m very positive when it comes to the character of our team and every single player.  I get along very well with all of my new teammates and it’s quite a decent squad.

In Gummersbach you were set as the number one player on your position. Finn Lemke also joined Melsungen, coming from Magdeburg.  One of his main reasons for the move was to get more court time in offense.  Is it okay for you to sit on the bench more frequently for the benefit of the team?  You may benefit as well while getting more time to rest?

JK: Sure, we have very good players on the left-back position, with Finn Lemke and Philipp Müller as well.  So, it won’t be a problem when it comes to getting a rest.  We will have to see how everything develops during the season, but I think we complement each other very well.  Everyone will get his time on the pitch, there’s no doubt about it.

What are you expecting from the team this season as they missed the Top 6 last year? Everybody predicts the top clubs to be even closer together in this campaign?

JK: I know that a lot of people are talking about us right now, and if you take a look at what happened this summer, it looks quite promising.  But first of all, we have to play up to our potential.  We need to find the right rhythm, although it already felt good during pre-season.  That’s why I’m quite optimistic that we can be part of that group at the top.  In my opinion the top teams will move even closer together, and you can lose points easily, I agree.  I also think we can play our part, even though the team finished seventh last year, mostly because of the bad start to the season.  But later on the club went on a run, and I believe we can continue on this path and establish ourselves in the top right from the get go.