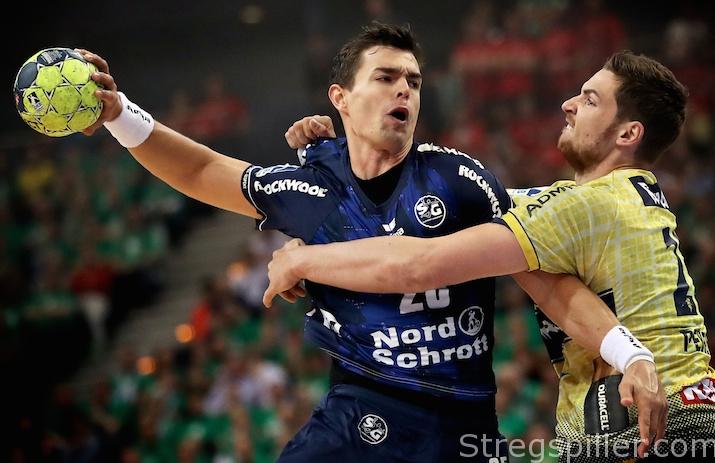 “The basics are still there”

SG Flensburg-Handewitt is working with a new coach this season, after Ljubomir Vranjes decided to leave the team to join Telekom Veszprem.  Kentin Mahé will follow him in 2018, while Mattias Andersson has announced his retirement.  Thomas Mogensen is set to return to Denmark.  That’s why the role of Rasmus Lauge as a leader of the team is about to increase, significantly.  The Dane still sees room for improvement, as he told me this past weekend during the “4 Clubs Tournament” in Gummersbach after their first match against the host.

You are in the middle of pre-season.  How is your physical condition at the moment?

RL: Basically good.  I’m still feeling the preparation, but we had a day off on Thursday to relax a little bit.  I think it already showed and we can be happy with our performance, especially on the defensive end.

What has changed since Maik Machulla took over as your new head coach?

RL: Sure, some details, but I think what has changed a lot are the power and running exercises.  It’s still very tough but different than what we were used to. It worked so far and I hope, if we can relax a little more, that we are really fit and ready for the first games.  Then we will see.  When it comes to our game – we do a lot of the same things we did in the past.  Which is good – I think – because it has worked successfully in the past, many times.  We will also change some minor things, but the basics are still the same.

What do you think about your new teammates in the backcourt? How much time will they need to adapt to your system?

RL: That’s a good question and I’m not sure.  I hope soon.  First of all, they fit well into the team.  Obviously there is still some difficulty regarding the language.  But they are learning fast and they already received all the information they need.  In the beginning it was a little bit difficult but today I already saw some improvements.

What needs to happen for your season to become a successful one?

RL: We have an important week ahead of us, starting with the “First 4” in the German cup.   We had some matches so far which weren’t that good, although the hard training has been the main reason for that.  We have to keep our level as high as possible, so we can win games even on a bad day.  That’s the biggest challenge.  But I think we have a lot of potential.  I also believe we can beat anybody.  It will be an exciting season and we will play every game to win it.

With Kentin Mahé leaving in 2018, Thomas Mogensen about to leave and Mattias Andersson retiring, is it on your mind that you have to step up even more in your role as a leader?

RL: No, not at all.  It’s still one year to go.  But I think I have to show something this year.  I always want to improve my game, every single time.  I also want to improve off the court, when it comes to mental things as well as managing my energy.  When I’m not playing, but also when I am on the court.  That’s a challenge for me and obviously I want to take a lot of responsibility.

When you talk about improving yourself, where do you need it most?

RL: Basically in every department, but with regards to my game I think a lot about my shot.  I also have to improve in offense, but also off the court when it I am responsible for handling my energy.  That’s what I have to improve on.  It will be exciting and I’m ready for it.