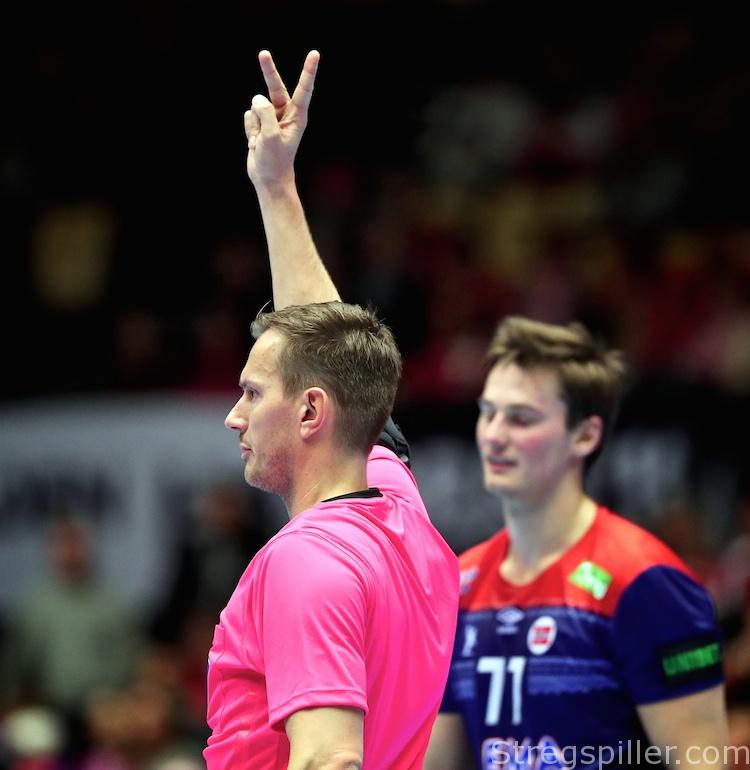 The “Challenge System” – Blessing or Curse?

FEATURE – As the first country in the world, Denmark will be testing the “Challenge System” as requested by the IHF. If the trial turns out to be a success, the system will likely be used in major championships down the road.

But, will the advancement be a blessing or a curse? Stregspiller.com has asked some of the people who’ll be affected by the change.

It will be a ground-breaking handball season, in Denmark. Already last year, referees could review their calls via video, but another dimension has been added for the 2019/20 season.

As requested by the IHF, the Danish Handball Federation will be testing a “Challenge System” in the women´s and in the men´s league. During the match, the coach of each team can “challenge” one call of the referees, but only in the following nine situations:

If the trial run turns out successful, the IHF will be inclined to implement the new rule in World Championships and Olympic tournaments in the future. So, it’s only natural that the pundits will pay close attention to what’s happening on Danish handball courts in 2019/20.

Here are some more important elements of the test case, to keep in mind:

The “Challenge System” will only apply to matches, which will be covered on live television, as TV stations will have to provide the additional camera equipment.

The coach will risk the benefit of a timeout, when calling a “challenge”. If he or she “wins” the challenge (meaning the coach was right, and the referees were wrong), he/she will get the timeout back.

If a coach decides to “challenge” a referee decision, while the opponent is in possession of the ball and he/she “loses” the challenge, the other team will receive a penalty shot. And, if the challenge took away an obvious scoring opportunity, the coach will risk receiving a blue card, on top of it.

Looks complicated? Don’t feel bad about it – it is!

The new rule raises a number of questions.

For one, will coaches be able to appreciate the pros and cons of the aforementioned nine points in the heat of the moment – including the risk of receiving a penalty at a critical juncture of the game? And, what’s it worth having just one challenge during the entire 60 minutes? Will the rule be another step undermining the authority of referees?

Plenty of questions – stregspiller.com has tried to find answers.

“Not undermining our authority”

Referees will be in focus for sure, as coaches will have a new tool at their disposal to question their calls.

One of Denmark´s top referees, Jesper Kirkholm Madsen, who’s been nominated for the upcoming European championships together with his partner, Henrik Mortensen, sees no major consequences on the horizon.

“I think it’s a great initiative and we should use technology to assist us, whenever possible.

“I don’t think it undermines our authority as referees. Our main goal always is to make the right decisions and any tool, that can help us to achieve it is welcome. That’s how I see it.

“As of now, we have to deal with TV pictures all the time and we have to accept that our decisions, in many matches, are replayed on TV again and again.

“I find it much better having the chance to correct a call on the spot instead of being confronted with a potentially game changing decision after the fact.

“However, I admit that it will take some mental preparation and it’ll also require to take the time one needs to take a thorough look at any given situation and review the scene from as many different angles as possible.

“I also admit that it might be a bit more intimidating for a young referee, who is in his/her first season in the top flight and who may feel that he/she has something to prove to players, coaches etc.

“I remember what it was like, when I made my league debut some 15 years ago. Back then, I felt the need to prove myself and that was without having the pressure of a video challenge,” remarks Jesper Kirkholm Madsen.

“Of course it also means that we’ll have more on our minds, but I gladly accept it, in order to achieve as many correct verdicts as possible,” he says.

“A step along the way”

Among the coaches reactions are positive as well, generally.

“Considering how complex the sport of handball is and how difficult it is to referee, we’ll probably never see the perfect solution, but I see this initiative as a good step along the way,” says Nicolej Krickau, head coach of Champions League participant GOG.

He had the pleasure of being involved in the first match, where the “Challenge” was used. In the game against newcomers Fredericia, he as well as Fredericia’s coach made use of the rule in the dying minutes of the match.

In Krickau´s case, he lost his challenge with less than two minutes left on the clock, as Fredericia were in possession at the time. As a result, they were awarded a penalty, which increased their lead to 32:30 before winning the affair 33:30.

“Even though the outcome of the challenge went against me, it was great to get the chance and try it.

“Of course, one match is far from enough to judge the new regime as a whole, but I think we are on the right track.

“As long as we only have one challenge per match, I’d probably always wait until the very last minutes to make use of it.

“It would take an extraordinary situation for me to call a challenge in the first half, and I would hope that referees use the tool of video review on their own, in case of a controversial scene early on,” says Nicolej Krickau.

“However, it’s still a test, and the most important thing is to get started.

“After the season, we’ll probably evaluate the experience and then it will be decided, if more “Challenges” will be allowed,” concludes the GOG coach.

“Anything that can assure correct decisions”

Former top coach and today expert commentator at TV2, Bent Nyegaard, has a positive attitude towards the new rule, but not without reservations.

“I welcome anything that can assure correct decisions and therefore I welcome the system.

“What annoys me, however, is that after a match, whenever the “Challenge” – or the video proof for that matter – was used, people talk about these scenes rather than the match itself.

“But, of course, that’s still better than a game decided by mistake that becomes the talk of the day,” says Bent Nyegaard, who finds one challenge per match insufficient.

“Of course, it’s still a test, but I think that a coach who “wins” his challenge should be awarded with one more challenge in the same match.

“Just like a coach who’ll be “punished” if he loses his challenge, a coach whose challenge turns out to be correct should be rewarded,” finds Nyegaard.

Letting technology play a critical role in the decision-making of referees obviously leads to an ethical discussion:

How far are we willing to go in allowing tech to get involved in interpreting the rules of handball?

Jesper Kirkholm Madsen does not see any alarming signals, yet.

“I think only imagination sets the limits to how we make best use of technology.

“I work in an IT company, so I know first hand how fast things move in this world and for me it’s hard to imagine, where the limits are,” says the referee.

“Every additional step will open an ethical discussion, as any new rule or system can be abused,” says Bent Nyegaard and refers to a recent scandal in a match of Denmark’s women´s league.

In this match Nykøbing scored, but if they had missed, Kobenhavn might have gotten possession of the ball and the chance to secure a draw – that was the intent when requesting the timeout!

“Unfortunately, it’s human nature to try and find the loopholes in any rule, and this incident shows that you can never be too careful when implementing new rules.

“When I was a coach, I wouldn’t have used these tactics, even if they had been available at the time.

“If that’s the price of winning, I do not want to win at any price.

“However, let’s give the “Challenge System” a chance and see how it all works out this season,” says Bent Nyegaard.