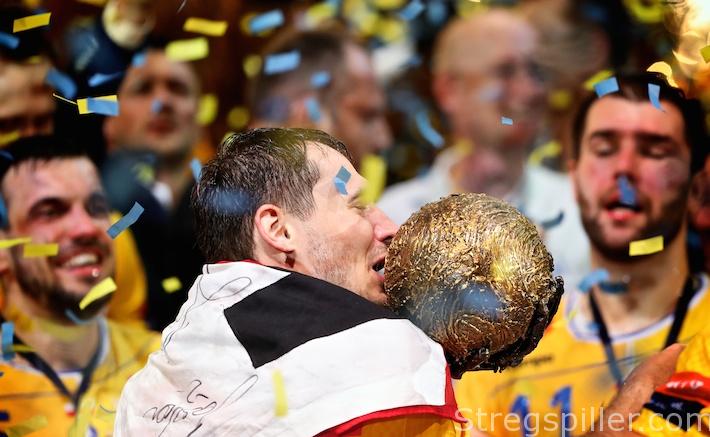 It was one for the ages, that’s for sure; maybe the most-epic handball game in history.  While you may not agree, at least it will go down as the greatest comeback in handball history, won’t it?

The 2016 final of the EHF Champions League between Hungary’s Telekom Veszprem and Polish powerhouse Vive Tauron Kielce turned out to be a classic after a boring beginning.  At the start of the second half nobody had a clue what would happen in the next hour.

Actually, it included the players, of both teams.  Superstars like Aron Palmarsson, Momir Ilic or Laszlo Nagy, all of them former winners of the Champions League, left the court in disbelief, as Kielce’s players celebrated in style.  Afterwards everyone who had followed the match thought: “How on earth was this possible?”  Strangely enough, even one year later, two of the key figures of the winning side – coach Talant Dujshebaev and right-wing Tobias Reichmann – don’t really know for sure.

“I didn’t believe we could turn it around and I think almost everyone thought we couldn’t do it.  A lot of people asked me what caused the turnaround, but I think you can’t pick just one single moment,” Reichmann explains twelve months later, adding “that Veszprem probably took it too easy.  When you lead by nine goals with less than 20 minutes to go, sometimes you ask yourself, what could happen to us anyway?”

Actually, it’s understandable, all the aforementioned players are able to score at any time, in any given match.

“They dominated us for 40, 45 minutes.  We tried everything – it didn’t work.  But then, when you’re down by nine and somehow you cut the lead to four, you start to believe in yourself again,” Reichmann says.

“Obviously it was quite tough for Veszprem, but we showed what’s possible even if there is almost no time left.”

His coach, Talant Dujshebaev, remembered one particular time-out in the second half, when he reminded his players about the importance of the game, and their pride.

“Guys, come on, if we lose by three or four, it’s alright.  You are my heroes.  But it can’t be true that we lose a final just like this.” Yes – Kielce was en route to the highest loss in a final match, in the history of the Champions League.  Asking his players to fight for a more honorable exit was a smart move.

But was it the turning point in the game?  Dujshebaev explained how Veszprem began losing focus: “I think, although I don’t know for sure, that Veszprem lost one or two percent of concentration.  In sports this can be just enough, because at this level it’s a mental game.  But I can’t really explain what happened.”

Ironically, Kielce could have ended the match before extra-time, but that would have been too much to ask for.

For the fans on hand it couldn’t have been any better.  As overtime didn’t help to find a winner a penalty shoot-out had to decide the outcome.  Reichmann remembers clearly what he had in mind when he stepped up to the seven-meter mark:

“I didn’t think about the game anymore.  I just wanted to score.  Obviously it was a bit more important compared to other matches.  I remembered some moves of Roland Mikler and luckily I choose the right option. The rest is history.”

As the next Final 4 is coming up in a few days, I ask myself, will we ever witness another drama as the one in 2016?  I think not.

Make no mistake this weekend’s event will be worthwhile watching.  Macedonian side Vardar has qualified for the first time ever and while Paris is (almost) everyone’s favorite, Veszprem is looking for redemption.  And did I mention record Champions League winner, Barcelona?

Well, there’s plenty to look forward to once again and we will witness another chapter of sports history, for sure.